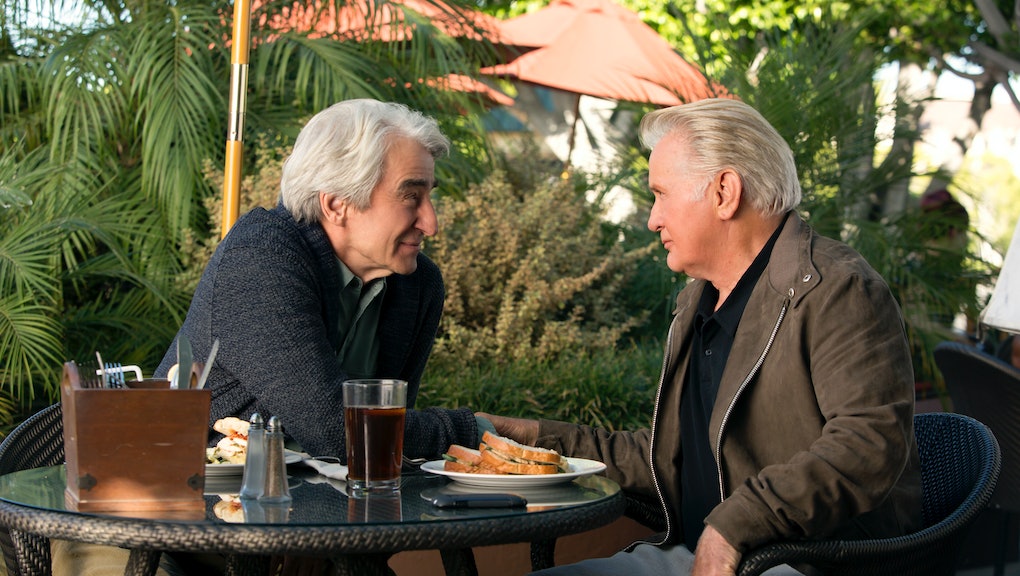 'Grace and Frankie' Fails as a Queer Show Without Any Queerness

Netflix has hit a rough patch.

After the streaming service debuted their exuberant hit Unbreakable Kimmy Schmidt, their new series have been underwhelming. Between the grim Daredevil and the dull Bloodline, two shows that have very little to do with one another thematically, a change of pace like the broadly comedic Grace and Frankie would seem like a good idea.

Unfortunately, the problems start right off the bat with the show's premise. Two women (Jane Fonda and Lily Tomlin) in their 70s who've hated each other for years must learn to live with one another when their husbands leave them — for each other. Yes, the husbands, played by Martin Sheen and Sam Waterston, have been having an affair for two decades, and they're finally coming out because they want to get married. Grace and Frankie, the show's titular women, are heartbroken and furious.

The show's purpose is far simpler. Get four titans of screen together in a goofy comedy to have fun. On that level, it succeeds. But by including gay themes, Grace and Frankie has taken on the responsibility of being a queer show. On that level, it fails simply by not knowing what it's doing.

Sonia Saraiya at Salon made an excellent point in her review that the show's gay content feels secondary. That's partially because it actually was secondary — the creators knew they wanted to make a show about Tomlin and Fonda before they developed the actual plot. That is, as Saraiya called it, "a bit of worrying flippancy" from the outset.

"It sounds like it was the right story for this day and age because it included a trend topic," she wrote, "not because it made the story richer."

As comfortable as Grace and Frankie is with its female leads, it is equally uncomfortable with Sheen and Waterston. It's hard to believe these two as romantic partners; everything comes off as two very close male friends, not as passionate lovers. Sure, some of that could be chalked up to their age, but both actors showed an ability to display intense passion in their previous shows, The West Wing and Law & Order. President Jed Bartlet's marriage was thrice as fiery as these guys' two-decade-long affair turned out-of-the-closet romance. We don't need intense sex scenes, just some chemistry.

There's a growing number of queer shows on TV, from Transparent on Amazon to Faking It on MTV. Many are even on Netflix, including the incredibly successful Orange Is the New Black and the previously mentioned Unbreakable Kimmy Schmidt. That's what makes Grace and Frankie so disappointing: It's a lazy effort to step into the queer space by a "network" that's done far better in the past.

A show about two 70-something women played by Tomlin and Fonda should be a grand slam. They're both fine actors, and their friendship off-screen clearly informs their work here. It's unfortunate Netflix had to tie their loose, fun work to an irresponsible, dismaying gay story. Here's hoping their next queer effort is better.