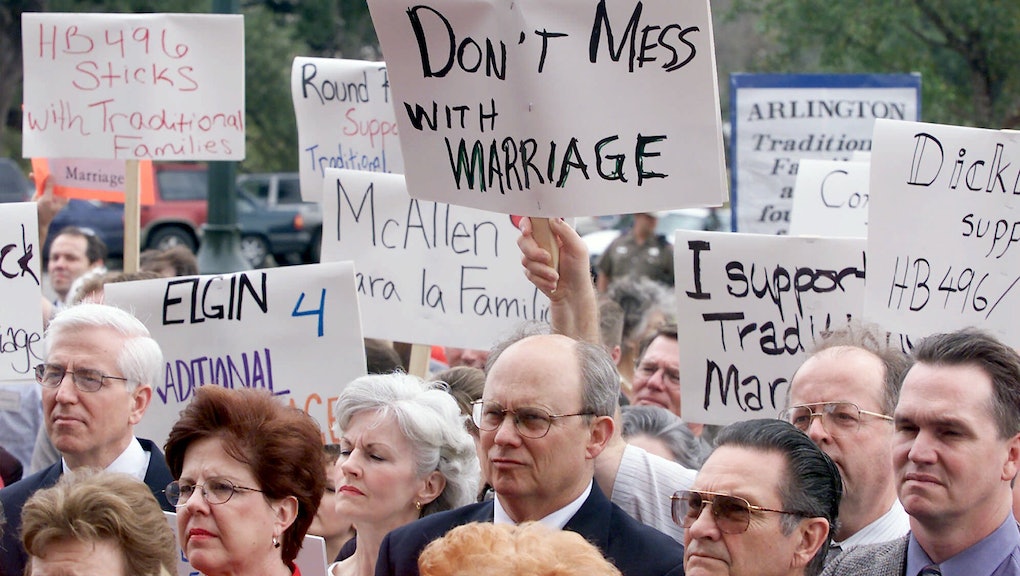 Same-sex marriage may have the majority support of the American public, the American judiciary and, in all likelihood, the Supreme Court, but that isn't discouraging anti-equality state legislators from standing athwart history and yelling "Stop!"

The Texas House of Representatives, one of the most conservative legislative bodies in the country, is poised to pass a bill that would "exempt" the Lone Star State from a presumptive Supreme Court ruling in favor of nationwide recognition of same-sex marriage. House Bill 4105, scheduled for a vote Tuesday, would bar state or local funds from being used to license same-sex marriages. It would also prevent any state or local governmental employee from granting a marriage license to a same-sex couple, Marbury v. Madison be damned. Basically, no matter how the Supreme Court rules in June, government employees in Texas won't be "allowed" to recognize same-sex marriage.

"This irresponsible and mean-spirited bill doesn't just put Texas on a collision course with a potential Supreme Court ruling," Terri Burke, executive director of the American Civil Liberties Union of Texas, said in a statement to Mic. "Its passage would also bring national condemnation by attempting to lock in discrimination against gay and lesbian couples who simply want to make a lifetime commitment and protect their families the same way everyone else does.

"It's clear that some of the folks at the Texas Capitol learned little from the way Indiana's lawmakers wrecked their state's national reputation with their own discriminatory legislation this spring."

Will it pass? The bill has 89 co-authors, not including Rep. Cecil Bell (R-Magnolia), the bill's primary author. That's well above the simple majority needed to pass the bill through the 150-member chamber and send it to the Texas state Senate, where LGBT activists predict it will easily pass.

In fact, if support for the bill is strong enough, it won't even need Gov. Greg Abbott's signature. Through a quirk in Texas legislative process, if the bill passes with a two-thirds majority in both chambers of the Texas legislature, it will take effect immediately.

Just how anti-gay is this bill? If the heterosexist views of HB 4105's supporters are any indication, very.

"If you passed a law that we're going to go and round up people of an ethnic group and put them into jail and exterminate them, would you abide by that law?" asked Steve Hotze, president of the Conservative Republicans of Texas, at a committee hearing on the bill during which he compared a Supreme Court decision in support of same-sex marriage to the actions of Adolf Hitler's death squads. "What did they do in Nazi Germany? It was legal to round up Jews and put them in the chambers and kill them. And the defense they said is, that was the law." Hotze also likened same-sex couples to murderers and pornographers, hitting the rarely accomplished Godwin's trifecta of ad hominem hate speech.

Despite that testimony, Bell told the committee that the bill is nothing personal: "I just want to be clear that I do respect people and I do love people, but that doesn't negate law. HB 4105 simply asserts the sovereign rights of Texas, using the legislative process, to codify marriage in Texas as one man and one woman, and to make certain that our dollars are used the way Texans want them to be."

If opinion polls are any indication, this bill is too anti-gay even for conservative Texas. According to a 2014 survey by Texas Tech University, more Texans support same-sex marriage than oppose it. Given that more than a year has passed since that poll was conducted, and the consistent upswing in support enjoyed by the marriage equality movement over the past half-decade, that majority has likely grown even stronger.

Inevitability vs. bigotry: Next month, the Supreme Court will hand down its decision on Obergefell v. Hodges, settling once and for all the question of whether the U.S. Constitution protects the right of gay, lesbian and bisexual Americans to marry. Although attempting to divine how the Supreme Court plans to rule in a given case is a fool's errand (reports of Obamacare's death were greatly exaggerated), veteran SCOTUS watchers and legal experts are nearly universal in expecting a ruling legalizing same-sex marriage. This has politicians who have built their careers on making the world a shittier place for gay people very, very worried.

In too many states across the country, anti-marriage politicians are digging their heels for a knock-down, drag-out war against inevitability. "What is even more disturbing is that this bill is only one of more than 20 anti-LGBT bills currently under consideration in the Texas state Capitol," Lambda Legal's Eric Lesh said in a statement.

"The continued push for such blatantly discriminatory legislation illustrates that the Texas legislature is determined to demean LGBT people while confusing state employees who must follow the law set by the highest court in the country."

HB 4105 is only the latest in a series of panicked responses by Republican politicians to the, at this point, functionally unstoppable rise of marriage equality. So-called "Religious Freedom Restoration Acts" have been proposed in 22 states and counting, and certain would-be commanders in chief are advocating for a constitutional amendment to prevent the Supreme Court from overturning state laws.

Bills like HB 4105 and "religious freedom acts" only serve to highlight the refusal of conservative politicians to admit they have lost the battle against civil rights for LGBT Americans. That the proponents of these bills use terms like "bullying" and "intolerance" to describe the plight of a political movement that bullied with the best of them. To paraphrase C. Montgomery Burns: The Republican Party started the fight for marriage by besetting gays with DOMA and the Federal Marriage Amendment and Proposition 8, and now it wants to quit because it's losing?