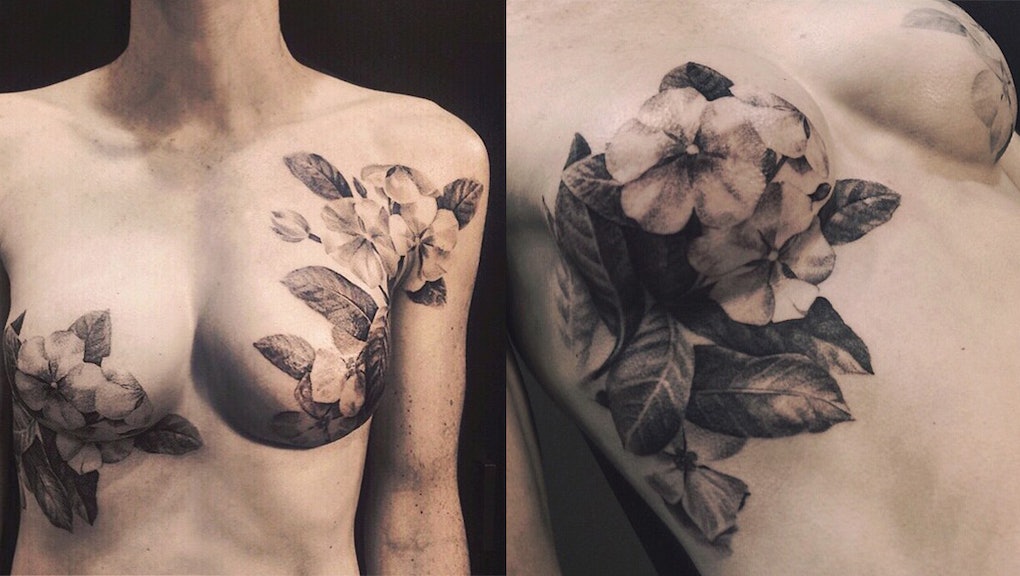 One in 8 women will be diagnosed with breast cancer in their lifetime.

On top of the pain, suffering and stress that accompany battling the disease, many women can feel psychologically and physically devastated after undergoing a mastectomy.

But there's an empowering trend gaining traction that involves covering mastectomy scars with ink, turning life-altering markers of pain into symbols of power.

Here are just a few stunning examples of people who have used tattoos to decorate their bodies after illness:

With a nearly 90% survival rate, breast cancer is actually one of the less aggressive cancers. But that figure is an average of a wide range of prognoses and stages, and any cancer diagnosis can be devastating to the person who receives it. Even those with positive outlooks are likely feel the lasting psychological impact of the disease, particularly if treatment includes mastectomy.

One study of women with increased risk for breast cancer found "a substantial proportion of the women reported problems with body image 1 year after" undergoing bilateral prophylactic mastectomy, a procedure removing both breasts in order to lower the risk of developing cancer. The study found issues with "self consciousness, 48%; feeling less sexually attractive, 48%; and dissatisfaction with the scars, 44%."

Some respondents also cited less sexual pleasure after the surgery.

The mastectomy tattoo trend has become so popular a response, even nonprofit organizations are taking steps to make these kinds of projects more common. A program called Personal Ink uses donations to offer these transformative tattoos to breast cancer survivors at no cost. The organization put together a video of four women's reactions to their body makeovers.

"My husband, I didn't let him see my scars for probably a year. I just want to be comfortable in my own skin again," one of the women said before the tattoo. She is visibly moved afterwards and emphatically declares, along with the three other survivors, "Fuck cancer!"

The results don't just have the benefit of being visually stunning; they are literally helping women feel in control of their lives and bodies again.

And on that note... fuck cancer.