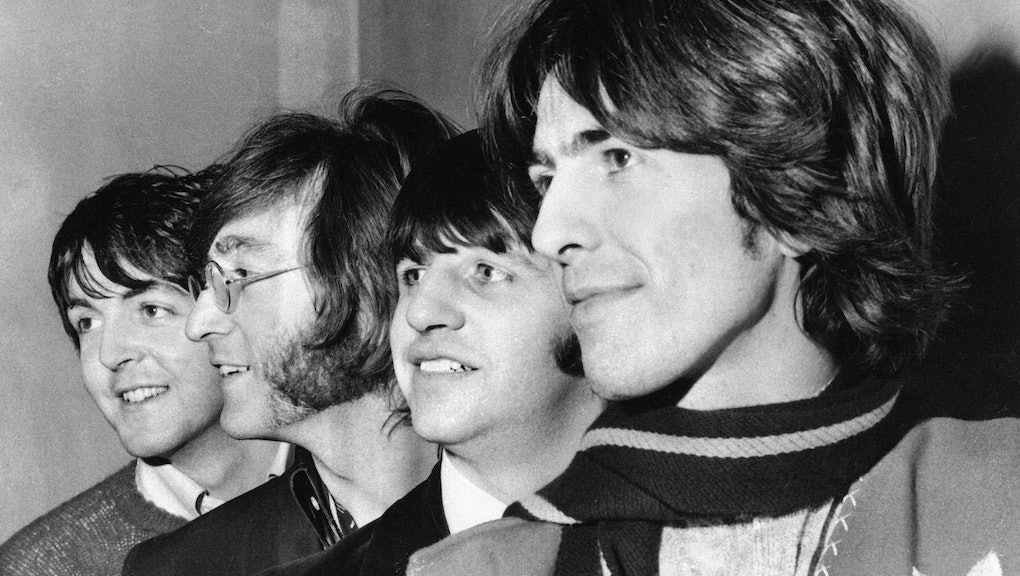 The John Lennon and Paul McCartney songwriting duo has been so lionized throughout history it's difficult to consider them anything besides creative divinity. However, after the Beatles broke up, neither achieved a comparable level of artistic mastery. But a third Beatle did: George Harrison.

Harrison, the so-called "quiet Beatle," shocked the world with his solo debut, which he began recording 45 years ago this month. Entitled All Things Must Pass, the album's spiritually infused folk and blues blew critics' minds. The moment was "the rock equivalent of the shock felt by pre-war moviegoers when [Greta] Garbo first opened her mouth in a talkie: Garbo talks! — Harrison is free!" wrote Richard Williams for Melody Maker.

All Things Must Pass remains the greatest solo recording any Beatles released. And had the songwriting partnership of McCartney and Lennon held, the world may never have learned how incredible a songwriter Harrison was.

Rock 'n' roll's Tolstoy: The variety of styles, emotions and stories Harrison drew from to create All Things Must Pass is astounding. He captured the ecstasy of artistic freedom on the joyous "Wah-Wah," and faithfully represented his most somber, introspective lows on tracks like "Isn't It a Pity."

Rolling Stone described the album's range as "extravaganza of piety and sacrifice and joy, whose sheer magnitude and ambition may dub it the War and Peace of rock 'n' roll." The comparison to Leo Tolstoy's immortal tome is more than convenient hyperbole. With a runtime of over 1 hour, 45 minutes, the album was rock's first triple LP. And the extended spread never drags.

Even the jam session on the last LP of the album is a significant moment in rock history. The band Harrison assembled — including Eric Clapton, Carl Radle, Bobby Whitlock and Jim Gordon — would go on to form Clapton's seminal group Derek and the Dominos.

Harrison's major hits are often ignored: Harrison packed the album with so many hits because he'd been stockpiling content for years. Lennon and McCartney insisted on maintaining control over the writing process with the Beatles. "Paul was very pushy in that respect," Harrison told journalist Mick Brown in 1979, as reported by Telegraph. "You'd have to do 59 of Paul's songs before he'd even listen to one of yours."

As a result, Harrison had numerous songs saved up. Harrison had wanted "Isn't It a Pity" to appear on Revolver, and he offered "All Things Must Pass," "Hear Me Lord" and "Let It Down" for the Get Back sessions, which became Let It Be — only to have all of them turned down. The Beatles' loss.

"It was endless," the album's legendary producer, Phil Spector, said of Harrison's treasure trove of hits. According to the Telegraph, "He had literally hundreds of songs and each one was better than the rest."

Harrison was pious: He told Brown that McCartney was especially "dismissive" of Harrison's "Indian-type tunes," which guide a significant portion of the content on All Things Must Pass and help make it such a fascinatingly unique musical statement.

The album has a deeply spiritual bent, expressing Harrison's fascination with Eastern religions and Krishna consciousness. "My Sweet Lord" is one of the purest and most personal statements of his newfound faith. Its refrains oscillate between Christian "Hallelujahs" and Hindu "Hare Krishnas." They exemplify the foundational Hindu doctrine that all paths lead to God.

Harrison was initially hesitant to release the song as the album's first single. "There's gonna be a lotta people who are really gonna hate me. Because people fear the unknown, you see," he said of the song in the Martin Scorsese documentary George Harrison: Living in the Material World. "I was sticking my neck out on the chopping block."

But it paid off. Upon its release, the song shot to No. 1 on the Billboard Hot 100, and held that position for three more weeks. The album spent seven weeks at No. 1, giving Harrison a Billboard double for top single and album.

Harrison found a truly unique sound on All Things Must Pass that has made a much deeper impression on music history than any other post-Beatles solo release. The album's spiritually conscious folk rock can be heard in bands such as ELO, My Morning Jacket, Fleet Foxes and Grizzly Bear, as John Bergstrom wrote for PopMatters. He also cites the song "Let It Down" as an impetus for the dream pop sound, crafted by bands such as Beach House, Blonde Redhead and Mac Demarco.

All Things Must Pass is a groundbreaking record, and is one of the few bright spots that can be drawn from the breakup of the Beatles. All good things must pass on. And from that tragic schism, Harrison was able to bloom into one of the most beautiful songwriters the world has ever heard.