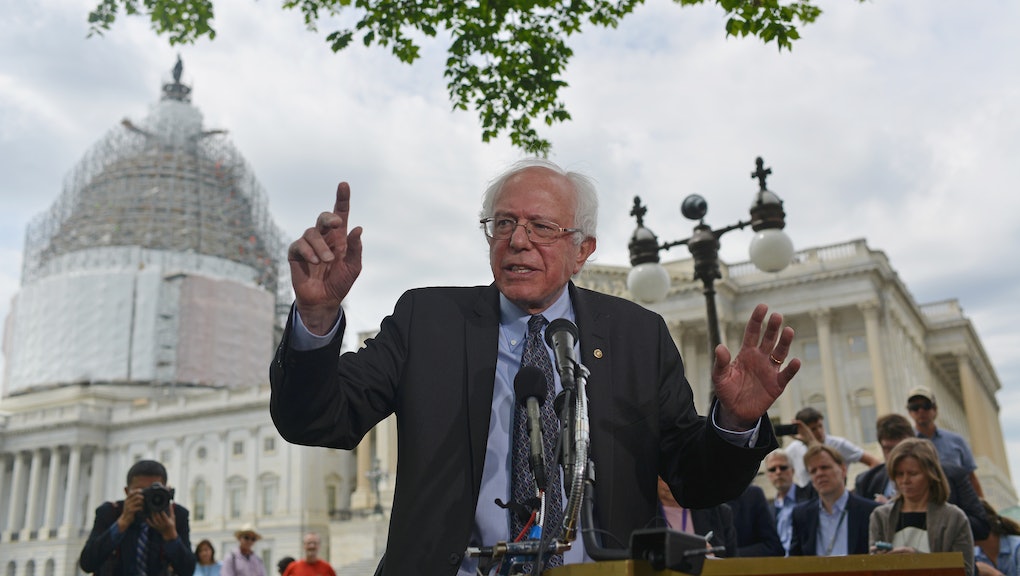 Six months out from the first round of primary voting, the country is already on a first-name basis with the Democratic Party's top presidential candidates. But for former Secretary of State Hillary Clinton and Sen. Bernie Sanders (I-Vt.), the parallels end right there.

Clinton is the prohibitive favorite, a political institution with a quarter-century in close orbit to the center of government power. Sanders began serving in Congress two years before Bill Clinton became president, but has spent his time there on the fringes of Capitol Hill as Congress' lone "socialist" member. He is, as one supporter said by way of introduction in New Hampshire last week, the candidate of the "12-hour filibuster and $12 haircut."

For all their differences, there is none so bright and bold as the manner in which they have raised money for their respective political campaigns. Based on analysis of donations received since 1980, the nonpartisan organization Crowdpac found that "Sanders receives over 60% of his campaign contributions from small dollar donors [giving between $1-199] compared with Clinton who receives less than 10% from that segment."

Clinton, who was elected to the Senate in New York in 2000 and 2006 before losing to President Barack Obama in the 2008 presidential primary, has received nearly half of her contributions in chunks of $2,500 or more, the maximum per person donation in a given election cycle. (Because primary and general elections are counted separately, individuals can commit a maximum of $5,000 over the course of a campaign.) Sanders, who went from mayor of Burlington to Vermont's lone representative in the House to the Senate alongside Clinton after being elected for the first time in 2006, has received a little more than 20% of his contributions in "large" chunks.

The patterns is likely to carry over into the 2016 primary race. Earlier this week, Sanders reported a healthy early haul — $3 million in the first four days of his campaign — with an aide telling the Huffington Post that 99.4% of the donations came in at $250 or less.

Clinton, who has yet to disclose her most recent fundraising numbers, did reveal plans last week to help raise money for a supportive super PAC, which can take in unlimited dollars from a single donor. Sanders told CNN he will not promote an equivalent organization.

Where's the money coming from? For a more detailed look at whom Clinton and Sanders count on for campaign cash, check out these two charts from the Center for Responsive Politics. Clinton is a favorite of big banks (Citigroup and Goldman Sachs) and major corporate law firms (DLA Piper and Skadden). The money does not come directly from the organizations listed, but from individuals employed there and political action committees formed by the companies. Both are firmly regulated and capped by the Federal Election Commission.

On the flip side, Sanders does not have a single bank's employees among his top 10 donors, which are mostly made up of unions — the only nonunion group is the American Association for Justice, part of the powerful trial lawyer lobby.

Though they are soon to share the same primary debate stage, Clinton and Sanders come from very different places, have very distinct political provenances. Campaigning in Vermont, Sanders was not compelled to raise the same volume of cash that Clinton, a candidate in New York and then nationally, needed for her richer races. But the sources and sizes of their respective backers tells us more about where their interests lie than we'll learn in any speech or political ad.