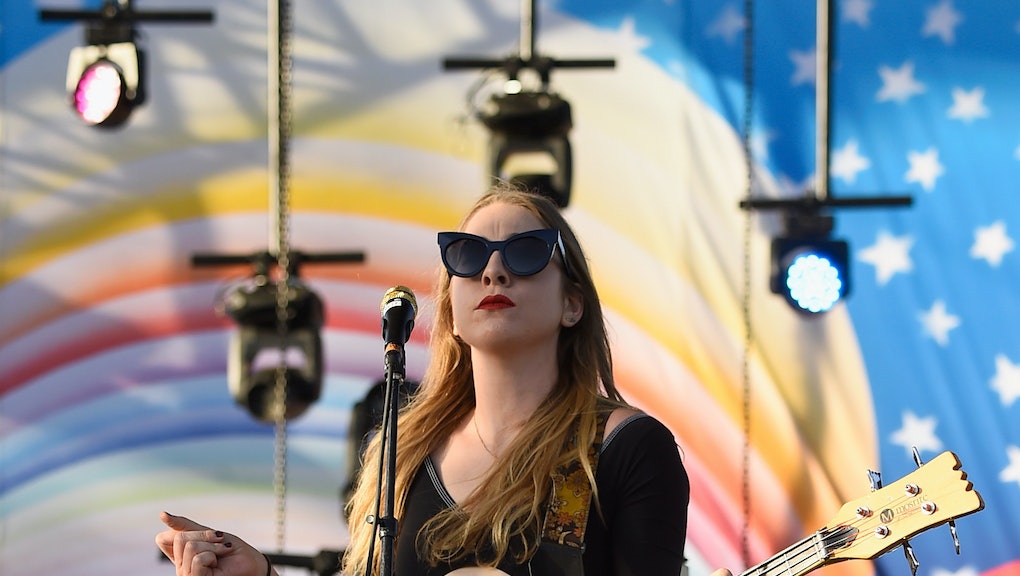 Festival season is upon us. That means, like previous years, we're about to see a whole lot of unsavory style choices, hilariously misguided corporate sponsorships and most importantly, a glaring look at sexism in the music industry.

Men and women attend festivals in roughly equal numbers, with women actually a few percentage points ahead, according to a new Nielsen report. But representation onstage is nowhere near as equal.

Bands with female members are grossly underrepresented at music festivals. Anyone who doubts this should take a look at the following set of gifs created by Pixable. Remove all the male-led bands, and the festival circuits from this year and last year would feature a lot more silence.

The trend stretches across most of the country's major festivals. Check Los Angeles' FYF Fest's 2014 lineup.

The absences are especially pronounced in terms of headliners. None of Bonnaroo's 2014 headliners have a woman member.

"It's a real shame that if a woman goes onstage with an instrument, it's almost a novelty," Jack White told Spin. "Like, 'Oh, isn't that cute.' It's a shame that in 2014 that's a little bit of what's going on."

New Jersey's Skate and Surf Festival 2015, which showcases a lot of the country's best punk and garage acts, might be the worst.

It's not like there aren't kickass female bands to represent.

"I'll see these articles that say like 2% of the people playing these festivals are not male-identified, and that's kind of an embarrassing statistic," Speedy Ortiz's Sadie Dupri told Mic in January. (Warped Tour's 2014 lineup was less than 20% female, according to Wondering Sound.) "You'll hear companies saying, 'The bands just don't exist! We'd book them if they did.' But they do."

Her band is a perfect example. Speedy Ortiz's latest record, Foil Deer, is absolutely kickass and can hold its own against any testosterone-fueled rock act. There's nothing "cute" about them.

There are some festivals that make a point to highlight rising female artists. But the mainstream hasn't echoed this impulse. The inequality of representation of women in rock is a pernicious problem across the genre. It's one that the original women of rock 'n' roll are sick of seeing.

"We fought very hard for feminism, for women's rights," Fleetwood Mac singer Stevie Nicks said in 2013 during a South by Southwest Q&A, according to Rolling Stone. "What I'm seeing today is a very opposite thing. I don't know why, but I see women being put back in their place. And I hate it. We're losing all we worked so hard for, and it really bums me out."

There is no shortage of amazing female acts in this country. It's time they started playing the stages they deserve.