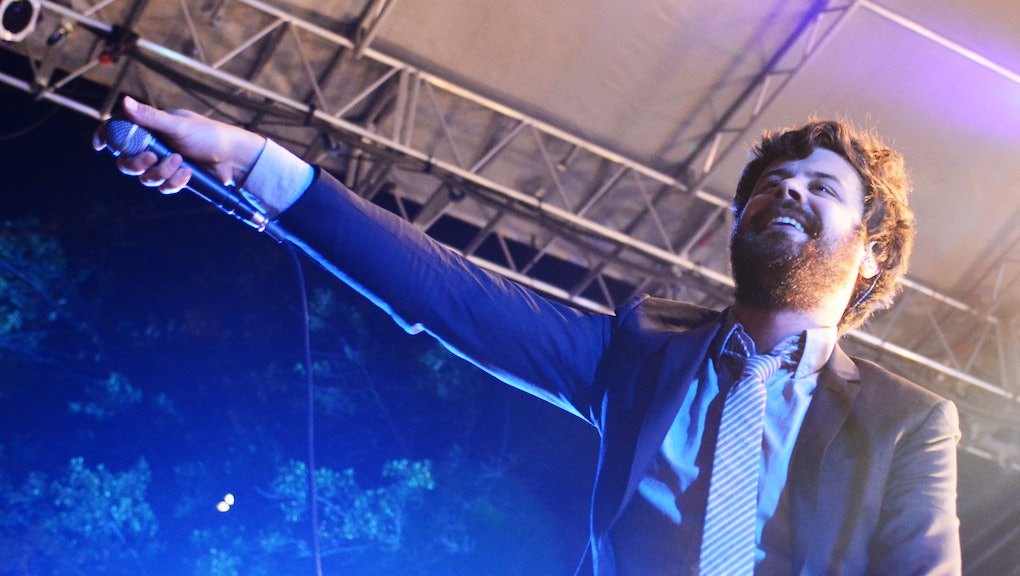 It's a romantic myth that certain kinds of mental illnesses are creatively productive. That is a fallacy almost as dangerous as the pervasive stigmas surrounding mental illness. While it's true that anyone — famous musicians included — can find themselves battling a mental illness, it isn't true that it's a necessary component of their creativity. In fact, if you listen to them speak, you'll hear it's often quite the opposite.

But musicians do play an important role in bringing to light issues surrounding mental illness. When someone in the spotlight opens up about their own struggle, it encourages others to seek help for themselves. Here are seven musicians who have been frank about their battle with mental illness — and in the process, helped change the stigma that mental illness is something to be ashamed of.

Beach Boys founding member Wilson has had a very lengthy, very public struggle with depression and schizoaffective disorder. He was only 25 when he began hearing voices, which he describes as "auditory hallucinations in my head, all day every day, and I can't get them out. Every few minutes the voices say something derogatory to me ... like, 'You are going to die soon,' and I have to deal with those negative thoughts."

Contrary to the myth that creativity is bolstered by this kind of disorder, Wilson says it wasn't until he started taking medication at 40, and having relief from his symptoms, that he was able to play music consistently. "I used to go for long periods without being able to do anything, but now I play every day," he told Ability magazine in 2006. "And finishing the album SMiLE two years ago was my biggest accomplishment ever."

Hip-hop underdog Hamilton struggles with bipolar disorder, a disease that nearly caused him to take his own life. Just as the prodigious rapper began making a name for himself in the hip-hop community, circa 2008, his erratic behavior and reclusive tendencies shut him off from the world. "I just didn't trust anybody," he told Billboard. "I didn't leave my house, I just made music all the time. I was fighting depression — I shut myself in."

Hamilton's bipolar disorder manifested itself when, for instance, he dedicated an entire mixtape to an imaginary relationship with Rihanna; rock bottom came when his ex-girlfriend punched him in the face onstage during a rap battle. His record label dropped him, and Hamilton went into a tailspin: He was living in an abandoned building and attempted to overdose on lithium. But Hamilton began treatment that includes regular psychiatric treatment and a drug regimen. A new management team took him under its wing, and he started talking about his illness, too.

"I decided to reveal to the world that I had bipolar disorder for anyone who had the exact same condition or a similar condition," he told Pigeons and Planes. "Hopefully, I can help them deal with their problems through my lyrics and show them how to persevere through my own perseverance. I could have given up a while ago but I didn't."

The American Idol judge and Grammy-winning pop singer struggled for 15 years with bulimia. In 1995, when she was 32, Abdul spoke openly for the first time to People magazine about her long struggle. "I felt nervous and out of control, and all I could think about was food," she told the magazine about her struggle that began when she was just 16. "Food numbed the fear and anxiety. I'd eat, then run to the bathroom."

Shortly after her divorce from actor Emilio Estevez, Abdul secretly checked herself into a clinic to seek help. When the paparazzi uncovered that she was staying at the clinic, Abdul's struggle became public, and her parents came to her side and supported her through the process of healing. "My life took a difficult turn, and I'm proud to say I survived it," she told People. "I have no doubt I'll keep up my commitment to myself. I feel too good. And this is no bull. This is my life."

Angelakos, lead singer and songwriter of Passion Pit, announced he had bipolar disorder in an interview with Pitchfork in July 2012. He'd been diagnosed at 17, he'd attempted suicide one year after his diagnosis and he'd tried again later when he tried to jump out his then-girlfriend's apartment window. The day after discussing this with Pitchfork, he planned another suicide attempt.

Angelakos sought help, though, and in 2015 joined forces with Bring Change 2 Mind, a nonprofit that brings awareness to mental illness through education. "I don't think people talk about mental illness a lot, but they need to know it's OK to talk about how they are feeling," Angelakos told Pitchfork. "People are afraid of telling the truth because they think it's going to hurt everyone around them. I've kept so much inside that I've literally lost it. I wish more people would get help when they feel like they need it — not just to look to medicine, but to the support of others."

Irish singer-songwriter O'Connor has been very outspoken about the struggles facing people who publicly reveal that they have a mental illness. For her own part, the singer was misdiagnosed with bipolar disorder in her early 30s. She was prescribed lithium, a heavy-duty anti-psychotic that treats bipolar disorder, and she took the drug for eight years before another doctor told her what she actually suffers from is post-traumatic stress disorder.

Then she began the slow process of recovery, though she's said that the stigma surrounding mental illness often dissuades people from addressing their troubles. In an interview with Sky News, she said, "When you admit that you are anything that may be mistakenly or otherwise perceived as mentally ill, you know you'll get treated like dirt so you don't tell anybody and that's why people die." It's an important point — we need to create a culture where people aren't discouraged from talking about their issues. People need to feel comfortable asking for the help they need.

Babs has suffered from social anxiety disorder since the late '60s. During a performance in Central Park in 1967, the native Brooklynite forgot the lyrics to her song when she had sudden debilitating stage fright. "I didn't sing and charge people for 27 years because of that night," Streisand told Diane Sawyer. "I was like, 'God, I don't know. What if I forget the words again?'"

But she started taking the stage again in the early '90s. "One reason I can perform now is that they have pills for stage fright," she told Oprah Winfrey. "I wish somebody had told me about these pills years ago." Now, the singer takes anti-anxiety medication and uses teleprompters during performances to help ease her fears. She's an inspiration to people who find themselves debilitated by social anxiety.

By the time he started his solo career in the early '70s, rock legend Clapton struggled with alcoholism, which is a mental illness. He became reclusive, and his shows suffered from his erratic behavior. Luckily, his friends noticed that Clapton needed help, and The Who guitarist Pete Townshend set Clapton up to receive care. Clapton continued to struggle, but by the mid-'80s he had stopped drinking. During his struggle, Clapton wrote in his autobiography, he had contemplated suicide more than once; the only thing preventing him from the act was the realization that he couldn't drink if he were dead.

"I thought there was something otherworldly about the whole culture of drinking, that being drunk made me a member of some strange, mysterious club," Clapton told Today, according to Look to the Stars. "The stuff that happened to me as a child made me totally insular — I thought I could do all of this on my own. It wasn't until I was quite a bit older that I finally did ask for help." Luckily, he did. And in 1989, Clapton announced that he was sober.