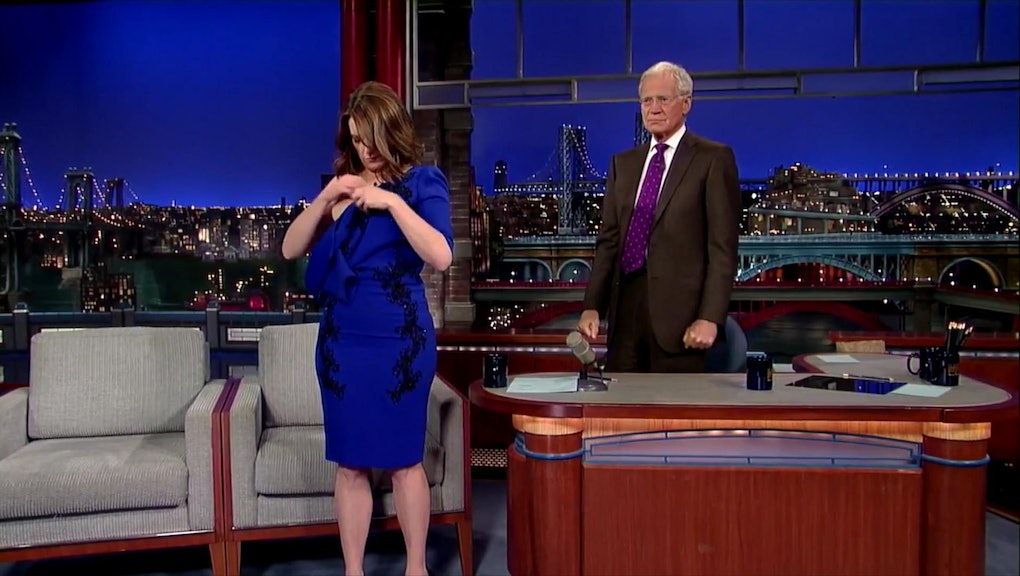 Tina Fey Stripped Down to Her Underwear, but Not for the Reason You Think

In her last appearance on the Late Show With David Letterman, Tina Fey gave the retiring host a feminist final present worthy of Letterman's three storied decades of television history.

On the show, Letterman complimented Fey's beautiful black-and-blue dress, comparing the TV and movie star's look to Duchess of Cambridge Kate Middleton. Fey responded by telling the host that "I dress up like this out of respect for you," adding that other late night hosts don't get the same treatment. "What, am I going to put on a dress for Jimmy [Fallon]? That's creepy," she quipped. "He's like my brother. What, I'm going to wear special underwear for James Corden?"

Then, the bombshell: Fey announced she was going to abandon "gender norms" and never wear a "fancy dress" on a talk show again. Then she said she was planning on giving Letterman the outfit — right there, on stage:

And lo and behold, off the dress went. Underneath, Fey wore a tight-fitting one-piece outfit with "Bye Dave!" written on the front and #LastDressEver written on her behind.

Fey's takedown of the double standard facing women who want to make public appearances without feeling obligated to wear slim, revealing dresses was both hilarious and bold. Letterman was so surprised that he could only say, "Look, it's Tina Fey!"

The #LastDressEver hashtag took off immediately, with users pointing out that this act would be pretty hard to beat:

Others commented on the feminist overtone of the joke, praising Fey for breaking down a norm that demands women dress a particular way to please the male eye. Fey's act of rebellion against the expectation that women conform to male standards won her many fans:

Others like the Guardian's Jennifer Gerson Uffalussy were less kind. Uffalussy called it "an act of comedy doubling as a humblebrag, thus removing all the threats that lurk within the power of female sexuality."

With Letterman's last show just a few short weeks away, the competition is on to see whether anyone can one-up Fey's showmanship.