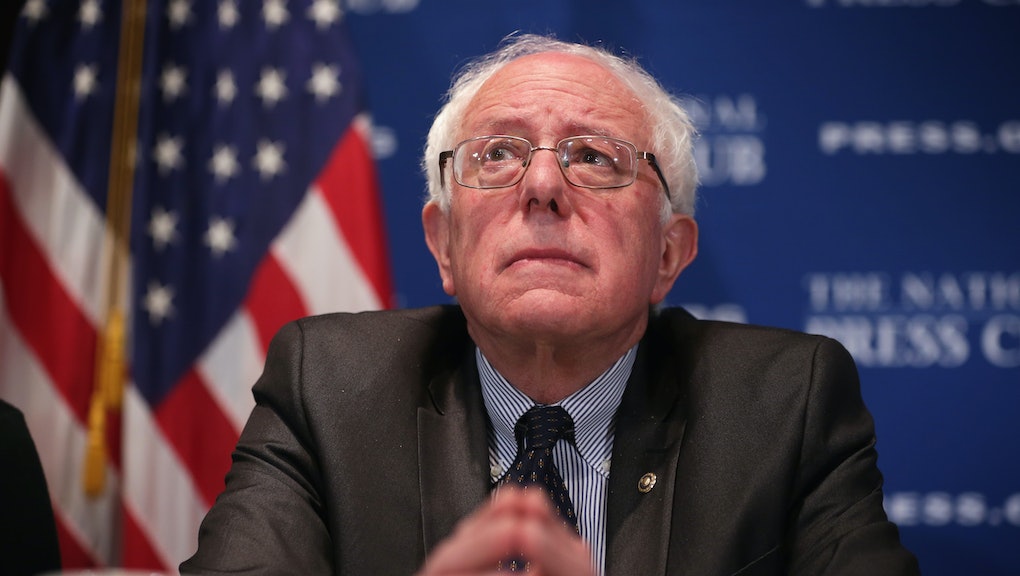 Vermont Senator Bernie Sanders is barely a week into his campaign for the 2016 Democratic nomination for president, but the self-proclaimed democratic socialist has hit the ground running in a big way. As the most progressive contender currently in the race, Sanders is commonly considered a long-shot candidate who might just be running to give the left wing of the Democratic party a voice to influence more centrist options like Hillary Clinton.

Sanders' campaign has made some big achievements since the beginning of May. Here are four of those early accomplishments:

CNN reports that Sanders raised over $1.5 million dollars from 35,000 separate donors in his first 24 hours of campaign operations, more than the Republican candidates who have announced. According to MSNBC, he also already has an army of 175,000 volunteers registered through his web site.

As the Washington Post's Philip Bump notes, Sanders' total almost certainly puts him well ahead of similarly long-shot Republican candidates like Ben Carson and Carly Fiorina, and even beat first-day totals for more mainstream candidates like Marco Rubio and Rand Paul. If Sanders was hoping to demonstrate that his campaign deserves to be taken seriously, Bump adds, then he definitely met that goal. Moving forward, Sanders' fundraising operation will have to prove it can maintain that kind of momentum alongside the widely expected Clinton juggernaut.

2. Calling out the "billionaire class"

Sanders did the above while breaking many of the unspoken rules of D.C. politics, explicitly calling out "the billionaire class" for ruining the economy and saying Americans are ready for a "political revolution" that will take the elite down a notch.

"For the last 30 years I've been standing up for the working families of this country," Sanders said, according to the Guardian, "and I think I'm the only candidate who's prepared to take on the billionaire class which now controls our economy and increasingly controls the political life of this country."

"We need a political revolution in this country involving millions of people who are prepared to stand up and say enough is enough, and I want to lead that," he continued.

While prominent Republicans have sensed the way the wind is blowing and scrambled to form conservative proposals for remedying stagnant lower- and middle-class incomes, they will have a hard time rebutting Sanders' call-out. Recent comments by Rep. Darrell Issa (R-Calif.) about how America's poor are the "envy of the world" highlight the challenge a party widely seen as beholden to billionaire mega-donors will face selling itself as plausibly committed to reducing income inequality.

Clinton has historically offered only tepid rhetoric about inequality. While she has been "weaving populist themes" into recent remarks, according to CNN, she has yet to deliver any Sanders-level attacks on America's mega-rich. By launching his core campaign theme hard and early, the socialist candidate has already planted himself as the most credible opponent of corruption and big money in American politics. He has also made it clear that he cannot be bought — a key issue when American confidence in our public and private institutions remains at historic lows.

President Barack Obama has been stumping for a minimum wage increase over the past two years, but Sanders is currently the only candidate who has put forth a similar proposal.

On May 2, Sanders called the current federal minimum wage of $7.25 an hour a "starvation wage" and taking big corporations to task for underpaying their workers.

"Anyone who works 40 hours in a week in America should not be in poverty. That's the simple reality," Sanders said.

Clinton has yet to name any specific wage proposal, while Sanders has gone beyond the current Congressional Democratic proposal — to lift the minimum wage  to $12 an hour — by advocating the $15 figure currently demanded by fast-food workers striking across the country. Ben Carson is the only prominent Republican who has showed any willingness to increase the wage, although the New York Times reports that his endorsement was limited to an admission that it "probably" should be higher during a CNBC interview.

By putting the minimum wage at the center of his campaign, Sanders has already begun to force other candidates to take seriously the idea of giving America's workforce more money. This input was sorely needed, as pretty much everyone in the race wants to avoid angering the business community. Sanders has kickstarted an important debate much sooner than his cautious fellow candidates would likely have done.

Few major players in D.C. seriously acknowledge the progressive left, let alone socialism, which still languishes as a Cold War-era taboo. Sanders has not only forced both parties to recognize the threat of grassroots political rebellion from the left, but he's also become the first self-declared socialist in recent memory to emerge as a legitimate presidential player. Salon's Eric Lee writes that the closest America has come to having a serious socialist candidate for president was in the late 1970s, when Democratic Socialist Organizing Committee head Michael Harrington mulled a challenge to President Jimmy Carter.

This is a big deal. Sanders will be adding a loud socialist voice to at least six Democratic debates, and political analysts are speculating not about whether Sanders will mount a consequential primary challenge but just how far his influence will extend. Insurgent campaigns like these have typically tended to come from the right wing, so Sanders is definitely poised to shake up presidential politics in a way that Americans simply haven't experienced.

By cutting through the usual rhetoric, Sanders may even help shatter the widespread perception of socialism as radical and dangerous. If other candidates can't adequately speak to the concerns Sanders will raise about inequality, poverty and cronyism in D.C., they'll have a big fat socialist problem on their hands come election time. For a country that just decades ago was busy napalming Communist countries, this radical shift in the power of the progressive left is one of the biggest changes in politics in decades.