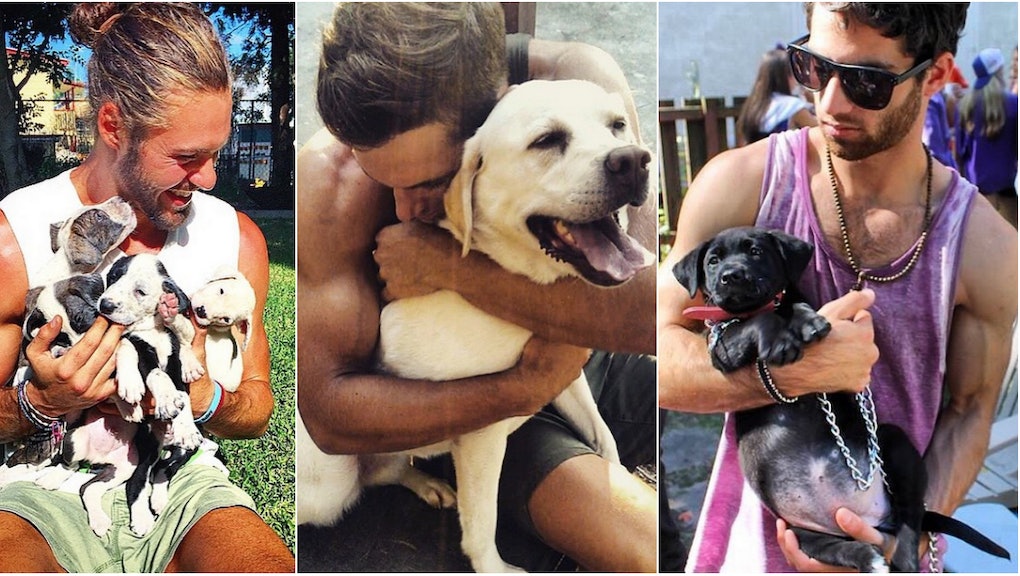 For Alison, the dating ultimatum "must love dogs" really worked.

The Los Angeles-based sales rep was already the proud owner of three dogs when a mutual friend connected her with a man who'd found a puppy wandering L.A.'s Koreatown. The friend arranged for Alison and the man to meet so she could adopt the pup — and, as it turns out, meet her future boyfriend. (The kicker, she told Mic, is that she had always wanted to name a dog "Grandma" or "Grandpa" — and he was calling the pup "Grandpa" already.)

The name choice was a coincidence, but the mutual connection wasn't. Dogs not only make adorable "wingmen" for meeting singles; owning a dog may actually make you the kind of person others want to connect with — and help you make those connections.

Can dogs make us better humans? A 2014 study out of Tufts University found that young adults who owned pets were more likely to be engaged with their communities and take up leadership roles. Based on a survey of 500 participants ages 18 to 26, the research suggested that building relationships with an animal was actually  "positively associated with feeling connected with other people, having empathy and feeling confident."

In other words, pets help us build social relationships in part because they influence the kind of people we are.

It makes sense that having dogs makes us more social, empathetic people. After all, given how needy and demanding canines really are, getting a dog means you've decided to care, nurture and protect another living creature, not to mention expand your "social circle" to include it.

"Owning a dog is a social act," said Shimon Aronhime, developer of Pupcrawler, a social app to connect dog owners for walks and playdates, launching this summer. "Our dogs are part of our nuclear families. That same urge to widen our intimate circle with a pet is the same urge that drives us to be social creatures, and we want our dogs to be part of that."

It makes sense to date a dog lover: If we're looking for sociable, empathetic people to date, having a dog is an immediate indicator.

Sure enough, in a survey of 700 people conducted by U.K. charity Dogs Trust, 60% of respondents said owning a dog made someone more attractive. Another survey of 1,000 singles found that 35% of women "have been more attracted to someone because of their pet" — and bonus points if it was a rescue rather than bought from a breeder. The rise of dog dating apps and sites, from the likes of Park Slope for Pets to PetsDating.com, are no surprise (nor is the Instagram account Hot Dudes With Dogs).

"It's a bit judgmental, but it's a reflex at this point," Alison told Mic. "If a date remarks that dogs sound like 'too much responsibility' or he 'doesn't really like animals,' that will be the last date."

"Back in my OkCupid days, I was able to determine a lot about a date's personality and our overall compatibility based on how they treated my dog. It was a quick way to gauge red flags," said Katie, a New York-based advertising professional who told Mic her Pomeranian-Australian shepherd mix, Barnaby, is her "best little buddy."

Luckily, just owning a dog can draw those people to you, no dating sites needed.

"Dogs have no shame. They will mingle and make friends with anyone," Aronhime said. "Dogs are the social animals that we wish ourselves to be. If only we could just walk up to anyone, smiling and wagging our tail, and strike up conversation."

If we could, dating would be a lot easier. In the meantime, we have dogs to give us the push.