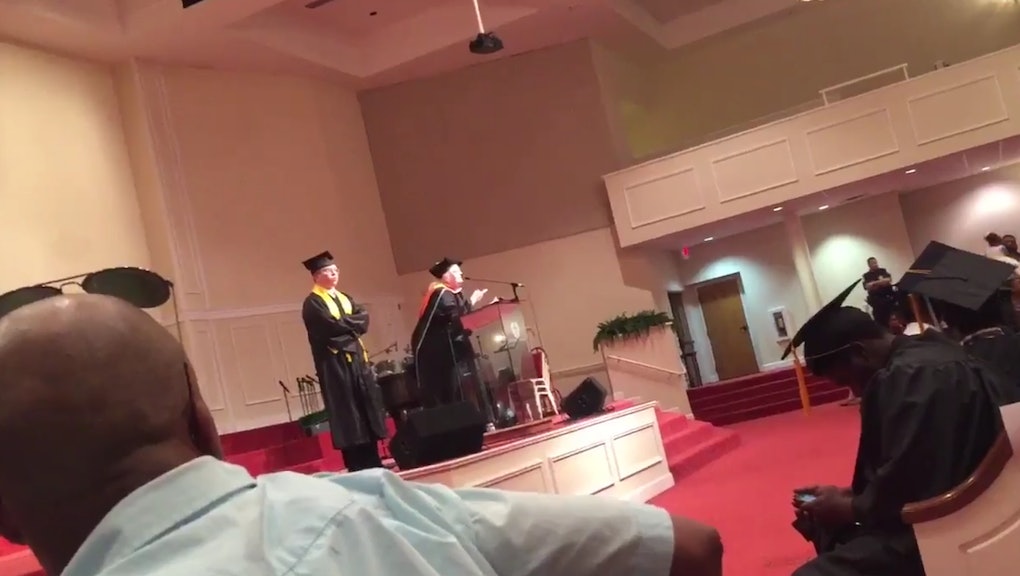 The principal of a Georgia high school who recently made a bigoted statement to a full auditorium is apologizing for stereotyping black people.

At a graduation ceremony May 8, TNT Academy founder Nancy Gordeuk apparently became very upset with her audience after several separate disruptions, including people leaving the room during an address from the class valedictorian. That's when Gordeuk took it to another, totally uncomfortable level, calling a man recording the ceremony a "goober and a "coward" before accusing "all the black people" in the auditorium of rudeness. WSB-TV aired footage of the ugly remark from two separate angles, which show audience members reacting with anger, shock and disbelief, before leaving en masse.

"You people are being so rude to not listen to this speech," Gordeuk says in the recordings. "It was my fault that we missed it in the program. Look who's leaving — all the black people."

Here's the full version, with audio:

Speaking to WSB-TV, Gordeuk further defended her remarks as accurate.

Gordeuk also apologized and characterized her remark as unacceptable, but said it came from frustration at a black attendee "for interrupting this speech for this student." In a statement provided to Atlanta's CBS46, she wrote that she had made a terrible "mistake" and does not discriminate against students.

It's a better explanation than the one she offered in a prior email to parents in which the principal actually blamed the "devil."

"A terrible mistake on my part of the graduation ceremony on Friday night," Gordeuk wrote. "The devil was in the house and came out from my mouth. I deeply apologize for my racist comment and hope that forgiveness is in your hearts."

Others present at the ceremony challenged the principal's explanation, saying that it was not actually just black people skipping the additional speech.

"She named only black people," attendee Brooklyn Jacobs told WSB-TV. "She didn't say, 'Oh, look at the Caucasians leaving, look at the Indians leaving,' she said blacks." One of the people who took video of the incident, Jada Gibson, told the Atlanta Journal-Constitution that the situation was "just very sad." The paper also reported that attendees had paid "between $250 and $300 for the ceremony," which was clearly ruined.

It also seems hard to believe this is a singular error. Studies have found that many people act much more racist than they perceive themselves to be; a University of Queensland working report discovered Australian bus drivers often allowed whites to ride for free but kicked off black and South Asian people who could not pay. While 86% of the drivers said that they would allow black riders without the correct change to remain on the bus, in practice just 36% of blacks avoided being booted.