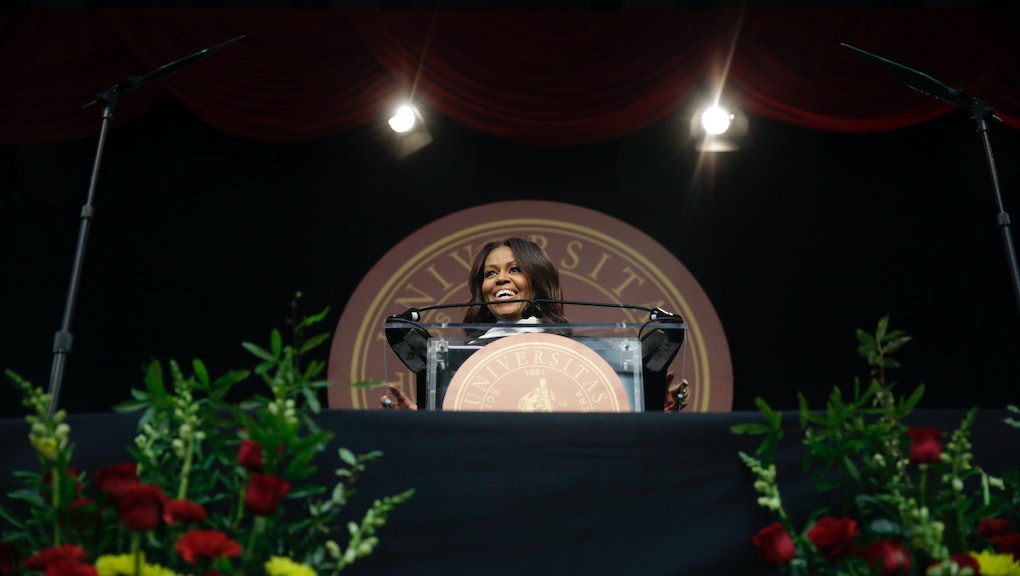 While receiving an honorary degree, Obama spoke about how she's had to think much more critically about these issues since her and her husband's foray into national politics.

"Back when my husband started campaigning for president, folks had all sorts of questions of me," she said.

Her speech was framed around how race informs a person's experience as an American — often, for black people, not in a positive way. She spoke about various ways black individuals can be penalized, on a personal or societal level, for the color of their skin.

Obama empathized with what this can do to a person's outlook on life.

"All of that is going to be a heavy burden to carry. It can feel isolating. It can make you feel like your life somehow doesn't matter."

But she reminded the graduating class this is never an excuse to give up or let the inherently inequitable system win.

A common criticism against the Obamas is their tentative approach to race relations, particularly during a time in American history when the issue desperately needs addressing. A surge in publicity around racially motivated police brutality has been the catalyst for black people across the country to express their grievances about systemic, institutionalized marginalization.

"If you set out to write a classic history of the Obama era, once you had described the historically significant fact of Obama's election, race would almost disappear from the narrative," writes New York magazine.

But the way the first lady boldly addressed the issue of racism, when so many people are afraid to or don't know how to begin the conversation, is a huge step in the right direction. This effort was compounded by her inspiring words on how to prevail and how not to let resentment dictate one's life.

This commencement speech was a major step in the official and public admission of America's problem with race. Identifying the problems and not being afraid to talk about them is the only way this country can move forward.