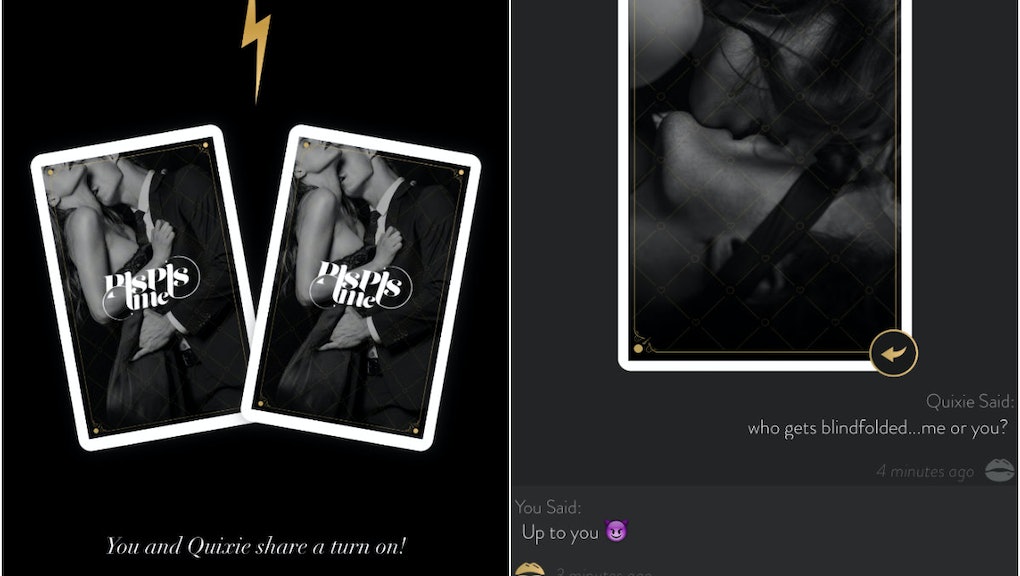 There's One Simple Way to Upgrade Our Sex Lives, and This App Is Helping Us Do It

"What are you into?"

While it may be a simple question, it's hardly ever answered. Couples may eventually be willing to sexually explore with one another, but getting to that conversation might be more awkward and challenging than we can handle.

PlsPlsMe hopes to change all that. The new app, which debuted at TechCrunch Disrupt NY last week, is designed to provide singles and partners with a completely non-awkward, safe place to discover and share what they want in bed. With 52 "turn-on cards," the app matches you and your partner's overlapping interests and alerts you of any shared desires.

Nervous to express a fantasy out loud? This app cuts through the awkwardness.

Starting that conversation: "In a sex-saturated world, it is incredibly difficult to discuss sex and share what really turns us on with our partners," PlsPlsMe CEO Graceann Bennett told Mic. "I experienced this firsthand when trying to improve my intimate relationship with my husband. I was a virgin Mormon bride that didn't know how to get the sex I wanted — or even what that was!"

She's not alone. The app's founders started by conducting the Sexual Exploration in America 2015 survey in partnership with lead researchers at Indiana University, home of the Kinsey Institute. The key finding? One in 3 American adults wishes it was easier to talk about sexual desires, while 50% of adults wish society was more open about sexual exploration, the PlsPlsMe team reported to Mic.

Users begin with a sexual personality quiz that creates their "sexual profile," then play around with 52 "turn-on cards" that they answer with a "love it," "like it," "not so much" or "no way." If any of their turn-ons match with their partners, they're informed Tinder-style and taken to a "Private Chamber" where the couple can discuss the fantasy at hand.

A sexy fix to a common problem: Why do we need an app just to talk about what we want in bed? Because — surprise, surprise — we're not always upfront and honest with each other. In 2011, researcher E. Sandra Byers published her findings that indicate rates of sexual self-disclosure are incredibly low between couples.

Not talking about sex has a huge ripple effect, particularly for women: The all-too-common orgasm gap has women having just one orgasm during sex for every three orgasms a man has. On the other hand, when we do get talking, a 2009 study found that couples who can talk about sex during sex end up enjoying it more. As sex advice columnist Dan Savage has been saying for years, couples need to embrace the question, "What are you into?" in order to get the most out of their sexual experiences.

Because that conversation needs to happen at every stage of a relationship — a one-night stand, a new partner, a committed couple, a spouse — PlsPlsMe is designed with every user in mind. The question remains whether partners who aren't already having these conversations will be willing to start them over an app. Should we be negotiating sex through an app just because everything else in our lives are facilitated by our phones?

While we won't find out until the summer 2015 beta launch of the app, Bennett thinks so. She believes that the "infinite state of foreplay" the app provides, coupled with the innovative research and advice, might be the difference the most awkward and uncomfortable among us need.