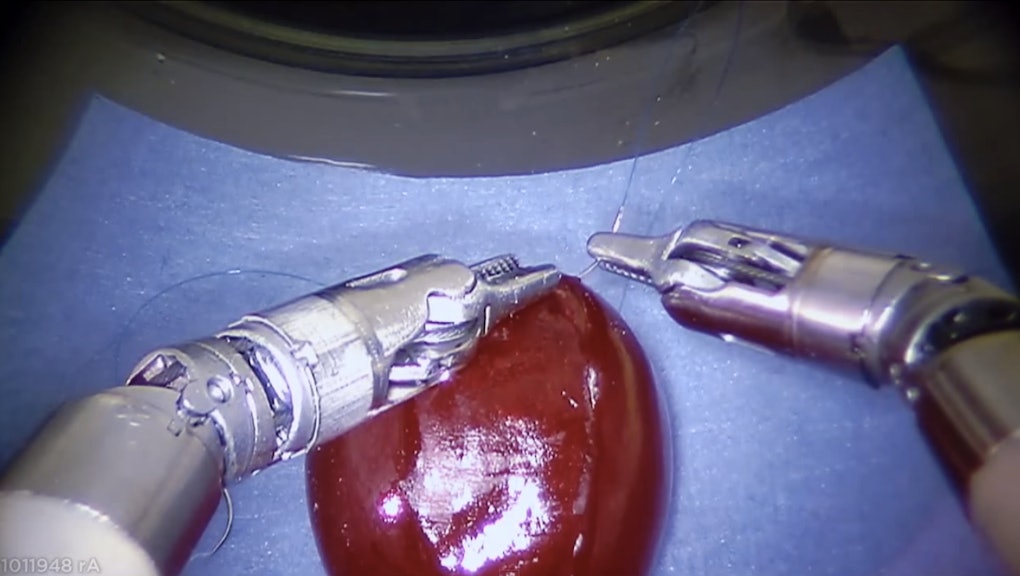 This Advanced Grape-Stitching Robot Could Be the Future of Surgery

With the grace of a windup toy ballerina, a robot sutures a wound, slowly and deliberately stitching a piece of skin back over the exposed flesh. It uses tiny metal clamps to hold the skin and thread in place. Finally, it ties a knot at one end, and a scissor-equipped arm cuts the line, completing the job.

It's hard to believe a robot is capable of such a delicate task. But this is no ordinary automaton: It's the Da Vinci Surgical System, named for the 15th-century Renaissance man who influenced the design of the first robot. The modern-day Da Vinci is an FDA-approved surgery tool capable of performing complex procedures in a minimally invasive capacity.

The Da Vinci, which has performed an estimated 1.5 million procedures to date, costs roughly $2 million. Since gaining FDA approval in 2000, there are already more than 2,100 systems in the U.S. alone. They're most commonly used to perform hysterectomies and prostate removals — tasks that, until the Da Vinci, sounded like terrifying processes to leave to a robot. But given the need for precise operations on an incredibly small scale, the Da Vinci's uses may grow as the system becomes more widely adopted.

This system won't do away with doctors entirely. Right now, a surgeon controls the Da Vinci within the same room. Its robotic scalpels work like an extension of the operator.

With that in mind, this could open the door to more complex internal surgeries. Using an endoscopic camera to film inside the body, surgeons may be able to perform small scale cardiac jobs, like heart-valve repair, without cutting a patient open and leaving scars.