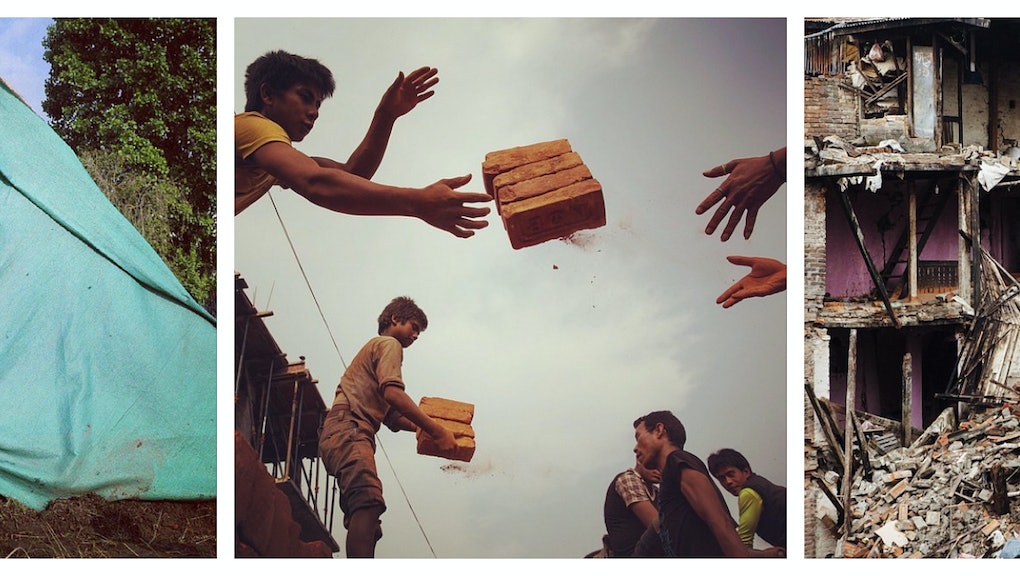 After a 7.8-magnitude earthquake hit Nepal on April 25, the first images to emerge were devastating. Carnage, death and destruction were common subjects in the aftermath of the quake, Nepal's worst in more than 80 years.

But on April 26, a group of photographers in India and Nepal banded together to add to the story. Calling themselves the Nepal Photo Project, they set out to document the region day to day: the devastation, the recovery efforts, the cleanup and the people involved in each step.

Using Instagram and Facebook, the Nepal Photo Project crowdsources photos from users in Nepal and adds vital information. "Rebuilding is the [villagers'] main concern as the monsoon is approaching," reads one posted alongside a shot of a damaged building. "More than 1 million children have been affected by the Nepalese earthquake," reads another.

"Schools have been demolished. Those that still stand are being used as temporary shelters..."

"Survivors look into a picture album, probably carrying images of their lost loved ones..."

Above all, the project is designed to provide information and context.

"Our goal with NPP is to put out as much useful and helpful information as possible," Tara Bedi, one of the organizers, told Time:

"Our main parameter for what we post is pretty simple: that it should communicate something purposeful or meaningful — be it the damage and devastation, links to reliable fundraising campaigns, photographs of missing people so they can be circulated as widely as possible, coverage of rescue and relief operations, citizen volunteer initiatives, links to resources like quakemap.org [or] other relevant articles and images."

She added that the initiative was not intended as a news service: "It's much more personal. Photographers have the freedom to express in a more 'real' and humane way and I think people connect to that." Her co-creator Sumit Dayal added that they decided to use Instagram in order to avoid sensationalizing the disaster.

"Soldiers are working tirelessly to accommodate all the new patients."

"I have a knee problem, so it was difficult for me to carry my grandson and run out of the room, but I managed."

"We have swellings all over our bodies, sleeping in the cold. We need tents."

On Sunday, Nepal's National Emergency Operations Center announced that the earthquake's death toll had topped 8,000, with another 17,866 injured and 366 still missing. Relief funding and aid has arrived from across the globe, but the region is still struggling amid the damage.

"Things were getting going, but obviously nowhere near the amount of funding and sort of support that they need," a hiker who traveled through remote villages told Australia's ABC. The villagers said they didn't anticipate any help from their own government for years, the hiker said.

For those at the Nepal Photo Project, the effort goes beyond just cleaning up what was once there: They also want to ensure that future generations don't forget their history.

"Kathmandu's major monuments now exist only in photographs," Dayal told Time. "It's quite difficult to comprehend that the next generation of Nepali children will grow up without this architecture that infused a vital cultural identity. As Nepal rebuilds itself, we intend to continue our work of sharing stories of human interest."

"An injured girl gets treated in the hospital ... [The earthquake] moved the city 10 feet south, according to experts."

"The bodies are still trickling into Arya Ghat, [the] cremation grounds..."

And finally, after great loss, life goes on.

"This Tamang baby is hitching a ride [four hours] back up the mountain on top of the aid supplies her mom received..."

"It's back to work at the hand loom factory on the outskirts of Kathmandu."