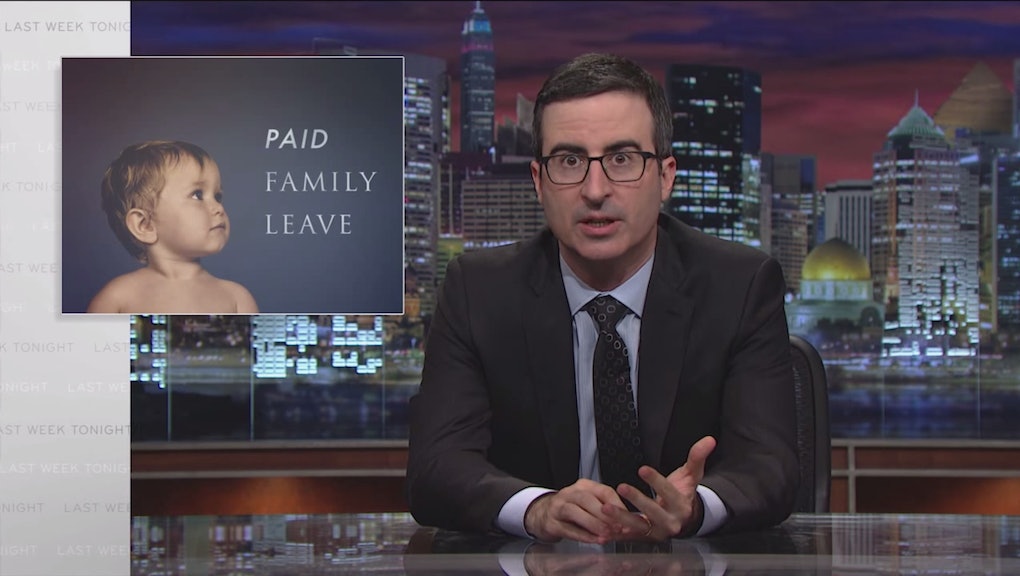 For most, Mother's Day is a time to fondly thank moms for all they do with cards, gifts and brunches. For John Oliver and his team, it's a time to remind America how stupid its family leave policies are.

On Sunday's Last Week Tonight, Oliver ripped into America's total lack of paid leave for new mothers and fathers. Unlike the rest of the world, save Liberia, Suriname and Papua New Guinea, the U.S. doesn't give paid time post-birth. It's an archaic policy and speaks poorly of an international superpower.

So what do new mothers have to do instead of taking paid leave time? They weave together bits and pieces of vacation time, sick leave and other available resources to get home and take care of their children.

This is an issue that overwhelmingly and disproportionately affects women, and their ubiquitous presence in the American workplace makes the lack of paid leave horrifying. But it affects fathers as well, as Oliver was quick to point out. Every parent can be disadvantaged by this, even in the best of cases.

In the worst cases, as with premature birth or other complications, America's lack of paid leave isn't simply inconvenient, it's disastrous. A dozen weeks of unpaid leave, the current standard policy, is a failure to America's mothers and fathers. It's the reason this topic gets brought up around Mother's and Father's Days every year: Such an obviously bad policy shouldn't be able to stand.

Yet come every Mother's Day, there's no change, only cards, flowers and brunches. Those things are great, but the best gift to parents new and old would be change for the better.