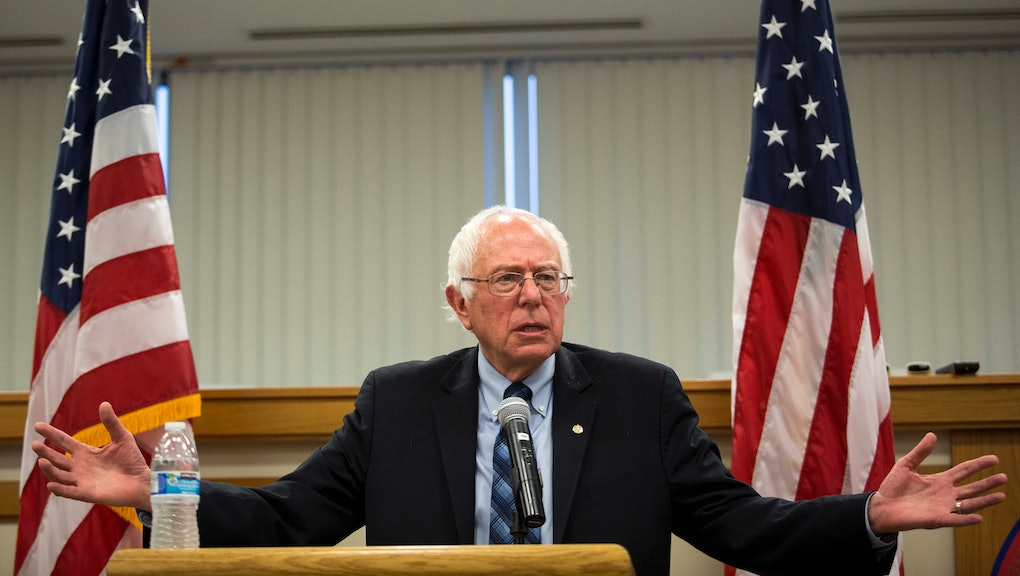 A new poll out of New Hampshire, home to the first presidential primaries of 2016, shows Sen. Bernie Sanders (I-Vt.) gaining support among Democrats in his campaign to upset Hillary Clinton and win the party's nomination.

Commissioned by Bloomberg Politics and Saint Anselm College and conducted by the bipartisan Purple Insights group, the survey found Sanders with 18% backing among Granite State Democrats, up from 8% in February.

Despite his steady advance — a May 5 poll from WMUR showed Sanders at 13% in New Hampshire — Clinton maintains a commanding lead. Since February, the former secretary of state has gained six points in the Bloomberg/Saint Anselm poll, which for the first time left Massachusetts Sen. Elizabeth Warren, who has repeatedly denied any interest in running, off the menu of options presented to respondents.

Clinton formally entered the race on April 12. Sanders followed suit on April 29, telling the Associated Press, "People should not underestimate me."

"I've run outside of the two-party system, defeating Democrats and Republicans, taking on big-money candidates and, you know, I think the message that has resonated in Vermont is a message that can resonate all over this country," he said.

Against the odds: Still, there is understandable doubt that any candidate — especially one who has said he will not help raise money for any super PAC supporting his candidacy — can compete with the rich and, to date, smartly operated Clinton apparatus. On Sunday, Sanders got the question point-blank from CBS Face the Nation host Bob Schieffer, who asked, "Do you really believe you can beat Hillary Clinton?"

"There is, in my view, massive dissatisfaction in this country today with corporate establishment and the greed of corporate America and the incredibly unequal distribution of wealth and income, which currently exists," he told Schieffer, promising to impose a "litmus test" on campaign finance reform for potential Supreme Court nominees.

Even without any billionaires' backing, Sanders knows a sustained fundraising operation will be key to forging a serious primary challenge. He brought an impressive haul in the first 96 hours after his announcement, when he took in an estimated $3 million dollars from a groundswell of small donors, which gave the campaign a necessary jolt. Now, with fewer than nine months to go before the first primary vote is cast, the "democratic socialist" from Vermont has begun to emerge as Clinton's most formidable Democratic foe.