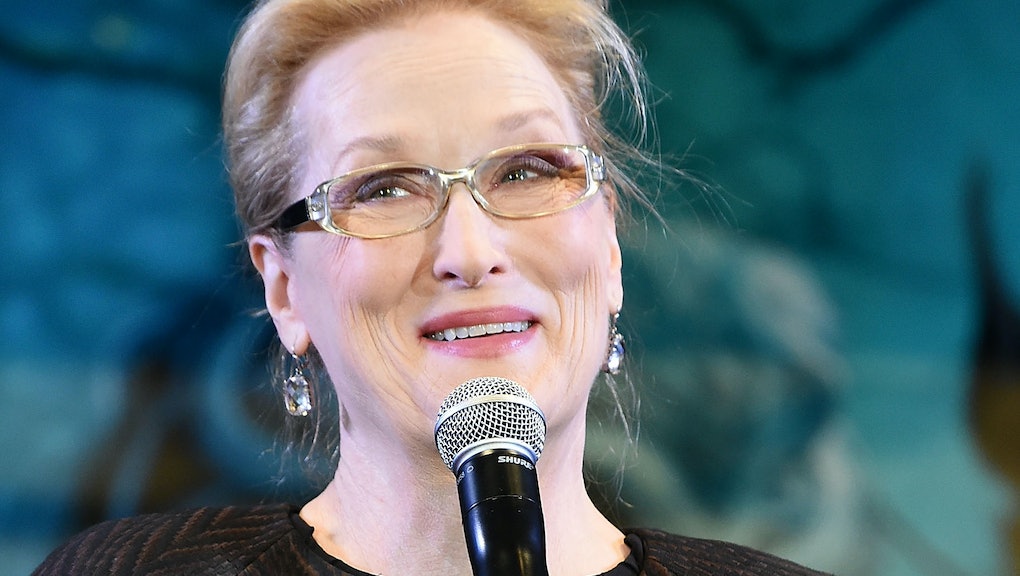 It's graduation season and the existential crises felt by countless recent grads is palpable. But the impending reality of adulthood presents unique challenges for women when it comes to career, relationships and families.

Luckily, plenty of powerful women have offered their thoughts on what women should keep in mind as they make this transition — and their timeless advice is as relevant now as ever.

Angelou delivered more than a dozen commencement speeches over the course of her storied career. But arguably one of her most powerful speeches encouraged a room full of Wellesley College women to embrace their courage in 1982.

Having courage is not enough, though, Angelou said. Women must actively employ it.

"You must encounter, confront life," she added. "Life loves the liver of it, ladies. It is for you to increase your virtues. There is that in the human spirit which will not be gunned down even by death ... Therein lies our chance toward nobleness — not nobility — but nobleness, the best of a human being is in that ability to overcome."

Streep, the undisputed queen of the modern film industry, knows a thing or two about performing.

Performance, Streep told the Barnard College Class of 2010, is often about a projection of power — especially when it comes to gender. "Women are better at acting than men," she said. "Why? Because we have to be, if successfully convincing someone bigger than you are of something he doesn't know is a survival skill, this is how women have survived through the millennia. Pretending is not just play. Pretending is imagined possibility. Pretending or acting is a very valuable life skill and we all do it."

As a young woman, Streep said, she often felt she had to perform an inauthentic form of femininity. "I adjusted my natural temperament which tends to be slightly bossy, a little opinionated, loud, a little loud, full of pronouncements and high spirits, and I willfully cultivated softness, agreeableness, a breezy, natural sort of sweetness, even shyness if you will, which was very, very, very effective on the boys," the Academy Award-winning actress said.

But her women's college education, Streep noted, helped her find and inhabit her true self — an authenticity and empathy she believes leads to satisfaction not just in her own work, but in her life. Her "sense of well-being and purpose in the world," she said, comes from "staying alert and alive and involved in the lives of the people that I love and the people in the wider world who need my help."

One of the crucial tenants of the rise of feminism in the 1970s was sisterhood: Feminism was considered a collective effort and the liberation of one meant liberation of all. Smith invoked this value when addressing recent grads of the New School in 2014.

"I speak in favor of recognizing our place within the many, not only as a slogan — much less as a personal sacrifice — but rather as a potential source of joy in your life," the author said. "It feels good to give your unique and prestigious selves a slip every now and then and confess your membership in this unwieldy collective called the human race."

She illustrated that point by recalling the seemingly mundane experience of distributing cake at her mother's birthday. She felt, she said, "Not puffed up with individual prestige, but immersed in the beauty of the crowd" and "connected if only in gesture to an ancient line of practical women working in companionable silence in the service of their community."

Together, Smith's comments imply, women can face the challenges of adulthood more effectively than they ever could apart.

"Failure" is the last word one would likely associate with one of the most successful and beloved authors of all time. But that's exactly what Rowling addressed in her 2008 Harvard University commencement speech — and considering the perfectionist standards to which countless young women hold themselves, a valuable topic to address.

Rowling benefited from failure, she said, because doing so forced her to stop "pretending to myself that I was anything other than what I was," she said, and allowed her to "direct all my energy into finishing the only work that mattered to me."

"Had I really succeeded at anything else, I might never have found the determination to succeed in the one arena I believed I truly belonged," Rowling said. "Failure gave me an inner security that I had never attained by passing examinations. Failure taught me things about myself that I could have learned no other way. I discovered that I had a strong will, and more discipline than I had suspected; I also found out that I had friends whose value was truly above rubies."

In her 2014 Dartmouth College commencement speech, Rhimes took on one of the biggest questions lobbed by female grads looking to role models for their future: "How do you do it all?"

Rhimes, "a very successful woman, a single mother of three," said she is constantly asked that question: "For once I am going to answer that question with 100% honesty here for you now ... The answer is this: I don't."

Post-grad life for women, Rhimes said, is about accepting failure: "Whenever you see me somewhere succeeding in one area of my life, that almost certainly means I am failing in another area of my life." And yet, she sees this trade-off as a feminist victory.

Though college degrees may come with some drawbacks — like crippling debt, for example — they are still undeniable markers of privilege in a global context. It's important that women graduates especially remember this,  Clinton noted at Barnard College in 2009, and use it that advantage to help others who haven't had similar opportunities.

"As women with strong voices and strong values, you are in a unique position to support women worldwide who don't have the resources you do, but whose lives and dreams are just as worthy as yours and mine," she said. "I have concluded after traveling many miles and visiting many places in the last decades that talent is universally distributed, but opportunity is not. The futures of these women and girls will affect yours and mine. And therefore, it is not only the right thing to do, but also the smart thing.

"This is a future that women in the history of the world have never been able to imagine, that you leave here empowered in a way that women and girls have never been before. It's exciting, but it's daunting. But I know you're up to it."