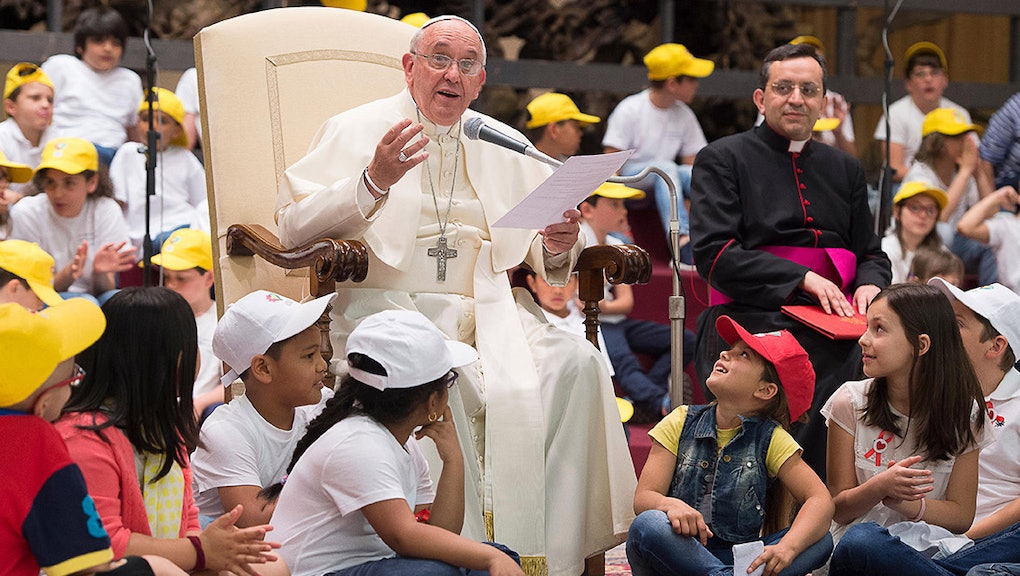 In One Quote, Pope Francis Reminds Everyone About the True Cause of So Many Wars

On Monday, with an audience of 7,000 Italian schoolchildren assembled at the Vatican, Pope Francis continued preaching his more progressive point of view by taking aim at war profiteers and the military-industrial complex they support.

"Many powerful people don't want peace because they live off war," Francis told the children in response to a question he received, adding "some powerful people make their living with the production of arms" in "the industry of death," the Italian newswire Ansa reported.

The pronouncement against war, while not the most surprising from the pope, offers a critical reminder to the world's roughly 1.2 billion Roman Catholics about the importance of peace and the various powers working to avoid it for their own gain.

The pope's blunt assessment was only the latest in a series of remarks from the 78-year-old pontiff, who has given the Catholic church a decidedly more progressive bent in recent years.

In 2014, he told the conservative Argentine newspaper La Nación that parents of gay children should stand by them, and famously asked reporters, when queried about LGBT rights, "Who am I to judge?" His papal predecessor, Benedict XVI, by contrast, previously called homosexuality an "intrinsic moral evil."

Francis' comments on war were a turnaround too, for an institution which has often been a part of the military-industrial complex he spoke out against. The Roman Catholic Church was a principal actor in a series of military and religious crusades between the 11th and 13th centuries which saw untold numbers killed by war, deprivation and massacres.

While the church is a calmer place today, the ability of religion — past and present — to abet the problems of war and violence remain as powerful as ever. Francis' message is one everyone should keep in mind the next time government or religious leaders declare violence to be the only option.