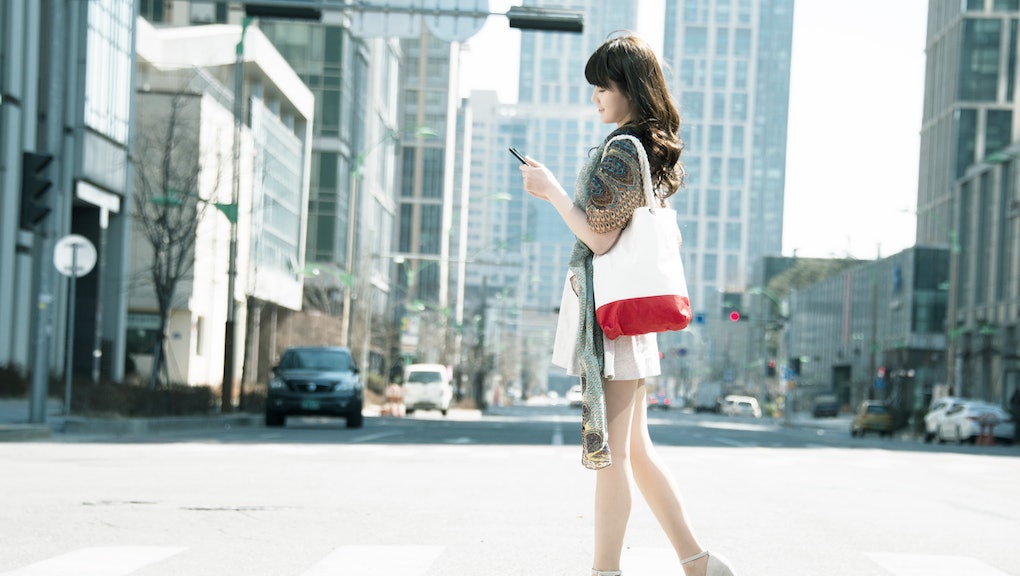 With a latte in one hand and an iPhone in the other, we sashay through our city like every street is a catwalk. We tap out perfect text responses punctuated with clever emojis. We're on top of every email, every tweet.

And then we faceplant into a fountain.

We asked the Internet for the most regrettable things that happened to us while we were glued to our screens. Ranging from the ridiculous to the downright dangerous, these tales may just convince you to look up every so often.

"Back in my car-dependent L.A. days, I was too busy firing off work emails on my phone and literally drove my car through a row of 20-foot palm trees acting as a road divider. That email was not worth the vehicle damage or insurance premium!"

"I was leaving a building at 3 a.m. once and was looking at my phone when my foot hit something, and I heard a squeal. I had kicked a rat. Pretty hard, because I was walking fast, but I didn't look because I had felt fur and just wanted to puke and/or saw off my foot. Now I walk an extra block to avoid them because I can hear them squeaking some nights, and those beasts are apparently fearless."

"One time I was on the street and ran into my roommate — quite literally, ran into him — and shrieked and everyone thought he was a bad man who had done me wrong."

"I was in a crowd of people crossing the street, and we were all crossing, but we didn't have the light. Somehow everyone else in this cluster avoided disaster, but because I was on my phone, I got mauled by a bike."

"I, like most people, hate talking to anyone on the train. I was on my way home once, with noise-canceling headphones and playing a game on my phone, and this woman sits next to me. She's sort of closing in on my personal space since it's crowded, but I don't look up. Four stops later we both get up to get off at the same stop and I realize it's my roommate."

"It was right after I bought my car and I was late to meet my boyfriend at a bar. When I finally got in the car, I was preoccupied with communicating with him that I'd be late and then I ended up running a red light. In my defense, it turned red as I was looking down."

8. "I suddenly smacked my head on this electrical box." —Rebecca, 25, New York

"I was heading back to Brooklyn from something in Lower Manhattan, and I decided to walk across the Brooklyn Bridge. I was texting, and suddenly smacked my head on this electrical box. I did not feel great, but I just kept going. I lived, so I feel it wasn't that terrible."

"I was running late for my math and computing midterm and was power walking — I was too dignified to run — down 10th Street in New York. I was frantically texting my roommate a litany of swear words about the varying degrees of how fucked I was when I crashed into Alec Baldwin. We both had a moment of shock before he said something to me. I have no idea what, because I also had headphones in. So I screamed 'I'm sorry!' at him and power walked around him. Then I noticed I knocked some of his dry cleaning to the ground, but I kept walking because I was running seriously late."

"I walked into a building that was being evacuated for a fire drill. I was updating Facebook about being late to class and didn't notice everyone leaving and standing around outside. Someone yelled at me to stop just as I reached the door. My friends still make fun of me, a couple of years later, by sometimes yelling, 'MA'AM! YOU CANNOT GO IN THERE!' when I go to open a door."

11. "I was playing Trivia Crack and nearly walked into traffic." —Stacie, 22, Boston

"I was playing Trivia Crack while walking down the street and nearly walked into traffic. My friend screamed at me and I stopped, but I almost got hit. It's happened more than once. The same friend always yells at me when I should look up."

"While staring at my phone screen, I face-planted and used the phone to break my fall, breaking my screen into a thousand pieces in the process. I was not eligible for an upgrade."

"I was at a bar, waiting for a friend to get there, texting said friend incessantly to ask him his ETA — social anxiety, I didn't want to be there alone — and the entire time this guy was like 'Ah, waiting for a friend?' I was like, 'Mhm.' The guy kept trying to make small talk but I refused to look up. When I finally did I realized how cute he was."

Fortunately, there's a semi-happy ending: "We ended up hooking up later but it was like a two-date sort of thing."

"Years ago, I was on my phone texting, and I ran my shoulder into a metal pole. I was walking into poles long before anyone else was. But now I have personal philosophy that anytime you're texting, you need to stop and move to the side of the street and get out of people's way."

Words to live by, Michael.