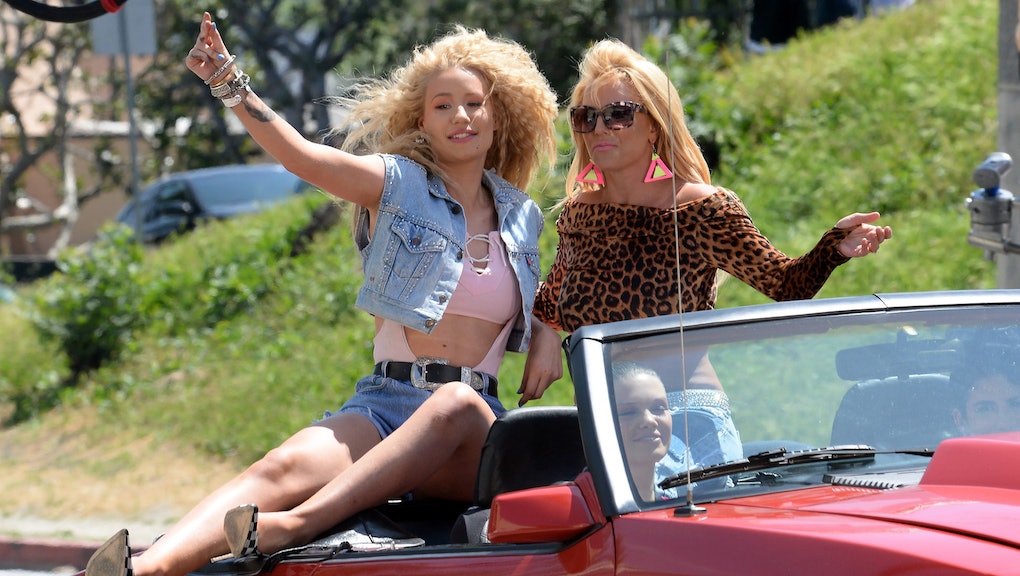 On May 4, Iggy Azalea and Britney Spears dropped the maddening schoolyard chant they're calling "Pretty Girls." It's the kind of catchy song you can't unhear — the kind of song the music industry won't let you unhear. The irritating track has been pitched as a candidate as the "song of the summer," and there are a few indications that it will be played all summer long. The release was timed to the sweet spot when most summer anthems across the past 30 years have been released. Not only that, it has all the giggly positivity and danceability these songs tend have. But most glaringly, this is a "song of the summer" because it sounds like last year's song of the summer: Azalea's "Fancy."

It's too early to know how successful "Pretty Girls" will be. But if all goes according to plan, this summer, as with last summer, will be all about Azalea. Like a movie studio churning out sequel after sequel, this is the music industry's new strategy. And it's about to get a whole lot worse.

What makes a "song of the summer": One of the industry's most sought-after accolades, the title is decided loosely by public opinion but generally goes to the song that tops the summer's streaming, download and radio spin charts. All three factor into Billboard's Song of the Summer chart. But according to industry insiders, radio is the most important measure. It's also the most easily controlled measure — a feat Azalea and Spears are achieving already with "Pretty Girls." The song is already turning some solid radio numbers, and Britney Galaxy is working hard to push it further.

"Once you're approved for radio, you are probably going to be on there for a long time," Gary Trust, Billboard's associate director of charts/radio, tells FiveThirtyEight. "While sales may come and go, while streaming may come and go — for radio, once it finds a hit, it will play it quite a bit because it knows people like it."

Actually, that's exactly what happened last year with "Fancy," and it wasn't necessarily because people liked that song. "Fancy" was inescapable on radio last summer due, in large part, to a Clear Channel program called "On the Verge," in which Clear Channel required its 840 stations to play "Fancy" a minimum of 150 times. With Clear Channel reaching approximately 245 million listeners per month, according to the Washington Post, one can see how influential that program is.

Repetition breeds affection: Ensuring a song's ubiquity goes a long way toward making people believe they like it. Studies show people are much more likely to respond positively to media they believe is popular. In fact, the human brain can also easily mistake the feeling of familiarity with actual enjoyment. The principle is called the "mere exposure effect," and the music industry is well aware of its power to sway public opinion.

That's why it makes sense to make "Pretty Girls" "Fancy, Pt. II." The songs are almost compositionally identical, from the plastic '80s synth to the rhythmic "hey" shouts on the chorus' upbeats — which were themselves already well-established as successful elements in popular music. Those choices allow songs to feel familiar all the faster. And they suggest that "Pretty Girls" might enjoy a similar reception to "Fancy" — the popularity and the occasional burst of hatred:

We deserve better: It may seem trivial, but it's not. When a song becomes a song of the summer, we're all implicit in that process. And, ultimately, it's our memories at stake.

"I think we're obsessed with the song of the summer in particular because it leads us to a moment in time," Tim Herbster, Clear Channel's vice president of special programming projects, told FiveThirtyEight. "It represents your entire summer the same way your class song represented your senior year in school. Memories become attached to the song that last forever."