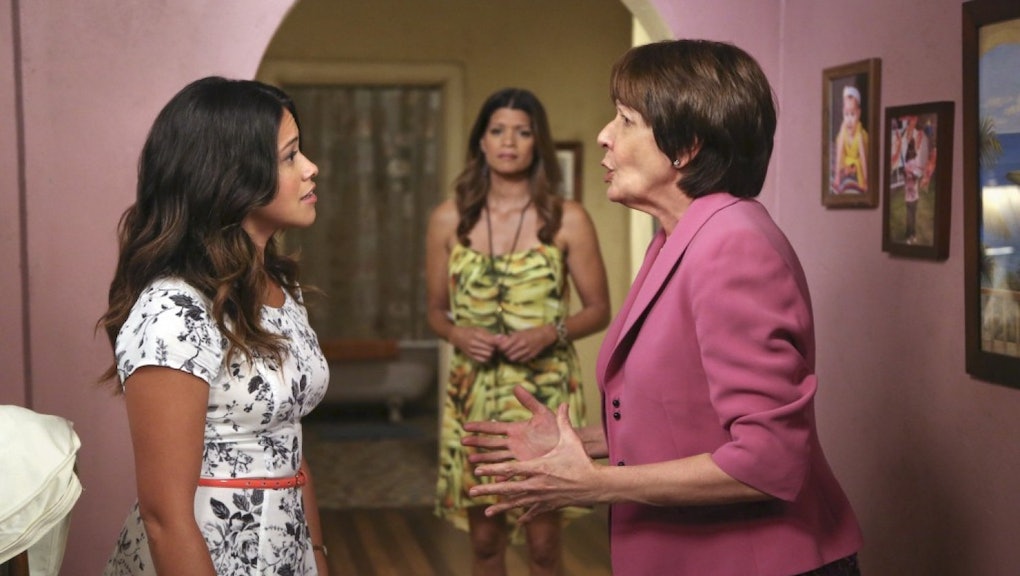 6 Important Lessons From the Women of 'Jane the Virgin'

After an incredible freshman season that saw more plot twists than your average episode of Scandal, the CW's Jane the Virgin aired its season finale this week. The telenovela adaptation ended in particularly dramatic fashion, sold with the exact tonal balance of wild and grounded that's made the show such a treasure all year.

That balance comes mostly from its impressive lead: Gina Rodriguez as Jane Villanueva. No matter how madcap the plot gets, Jane and her family stay grounded and, in the process, teach each other and the audience important lessons. (Spoilers ahead for Jane the Virgin's first season.)

Jane the Virgin could have become overwrought and unrealistic at several points this season. Some examples of the show's turns: Jane is in love with Michael! Now she's in love with Rafael! Now Rafael's ex-wife Petra and her mother Magda are holding a man hostage in their hotel room! Would you believe that last story is maybe only the sixth most absurd plot this season? Yet what makes Jane the Virgin such a pleasure, and what the creators would be wise to remember heading into season 2, is that its world may be wild, but its characters are real.

With that realism comes wisdom, which Jane and the rest of the Villanueva women share in droves. As the sun sets on season 1, let's look back at six great lessons we learned.

You're not defined by your sexual life.

Perhaps the most deceptive thing about Jane the Virgin is its title. Adapted from the Venezuelan telenovela Juana la Virgen, this series' titular woman is much more than her sex life. She is a writer, a teacher, a friend, a mother, a daughter, a girlfriend and so much more. To hear her proudly say that she will not be defined as a virgin is empowering. It's also a reminder that we should never let others pigeonhole us with our sexual orientation and proclivities, be it from a place of homophobia, slut-shaming or anything else.

Jane, who is accidentally artificially inseminated by her sperm donor's sister (again, this show is great), is pregnant throughout the first season. Much of the story focuses on her taking responsibility for herself and her future family, but in at least one instance, she chooses to throw caution to the wind — like when she dates her accidental sperm donor, Rafael (Justin Baldoni). The lesson: Life lived responsibly is important, but we should also take the chances we have when we can.

Even the worst situations can result in good things.

Forgiving the woman who accidentally artificially inseminated you is hard. It's even harder when, because of her actions, you and your fiancé split up, your life is thrown into turmoil and you get broken up with again in dramatic fashion. Yet Jane forgives Rafael's sister Luisa because, as she says, Luisa is responsible for bringing Rafael and their child into her life. Even if things don't go as planned, there's a way to look for positives.

Of course, even those positives aren't always easy to keep. Building a good life for yourself requires ambition, passion and incredible effort. It involves negotiating the often tricky personal politics of relationships. Is life hard? Absolutely. But for people like Jane who find the good in it, it's worth the fight.

Your relationship with your mother is important...

Sometimes, when your engagement ends and you feel like the world is ending, you just need your mother. Even when it's not as dramatic as it was for Jane, who had been angry at her mother before, there's great catharsis in simply connecting with Mom. The scene between Jane and her mom at the end of Jane the Virgin's fifth episode is wordless, yet still gut-wrenching. Even when things are at their worst, being able to cry with your parent is invaluable.

...as is the love in your whole family.

That goes for the whole family, of course. The Villanueva clan in Jane the Virgin constitutes three generations of empowered, independent women. They've all faced difficulties, from being an undocumented immigrant to raising a child as a single mother to, well — tally up all the chaos in Jane's life. Yet no matter how ridiculous things get, they support one another as a family. That love is truly invaluable.