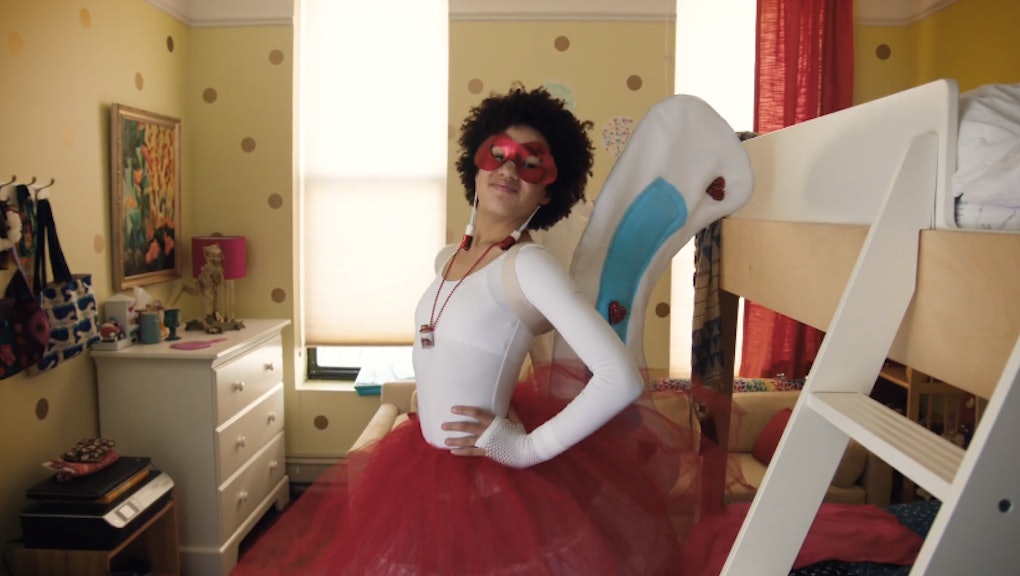 It's Time for Everyone to Meet The Period Fairy

About a year ago, period care-package company HelloFlo nearly broke the Internet with its first video production: First Moon Party. The video was embraced by countless women starved for an honest — not to mention humorous — representation of a completely natural experience.

Now, HelloFlo is at it again with a new video that follows one young girl's quest to discover the origins of the ever-elusive Period Fairy.

"At HelloFlo our mission is to normalize the way we talk about women's bodies and celebrate transitions," CEO and founder Naama Bloom told Mic. "We thought it would be fun to create a superhero that welcomes girls into womanhood."

The tale of the Period Fairy:

"Last month was my first month," the video's young narrator recounts. "And it was vagical."

But not every girl has such a positive experience, she notes, which is why they need a "shero" — the Period Fairy.

"History may have forgotten her," the young protagonist admits. "But herstory hasn't."

Our intrepid narrator then interviews the Tooth Fairy, Santa Claus and Cupid about the Period Fairy's origin story.

The Tooth Fairy notes that while many tried to pit the two — the only female fairies in the game — against each other (typical), she only has praise for her sister in arms. "She paved the way for me," the arguably better-known fairy effuses.

The Department of Mythical Creatures — an "Old Boys Club" — only deployed male period fairies who were "mansplainers," the narrator explains. They were clueless about women's needs.

Thankfully, the Period Fairy "broke through the glass ceiling" and was the first to say, "Instead of talking about it never, let's talk about it always."

Now, according to the Tooth Fairy, the Period Fairy is living off the hefty profits she made from selling period tracking app Clue. Santa adds that she retired to Boca Raton, Florida — "a place where nobody gets their periods."

The Period Fairy may ultimately be elusive, the young narrator notes, but that's okay. "Sometimes, instead of looking for a shero, you just have to be one yourself."

And just like that, a new Period Fairy for a new generation is born.

It's more than an ad — it's combatting stigma. While HelloFlo is, ultimately, a business endeavor — this video specifically is part of a partnership with feminine product brand Always — the company takes its mission seriously.

As Bloom explained to Mic, the point is to disrupt broader, damaging gender norms. "As women and girls we're taught to be pretty, polite, and proper," Bloom said. "Periods are not sugar and spice, they're blood and cramps. Discussing the realities of menstruation is at odds with how we as women are supposed to project ourselves."

Videos like "Period Fairy" help accomplish this, she said, by avoiding euphemisms while using straight talk "so that women can feel comfortable getting the information they need in a way that feels right and not clinical," Bloom told Mic.

It seems that in doing so, this video is contributing to a broader effort of women to challenge the stigma against menstruation — an effort that includes artist Rupi Kaur's self-portrait featuring a period stain and the recent public art project that used pads to discuss the serious issues women face.

Hopefully, each of these efforts will inspire women to discard the shame they're encouraged to feel about a biological phenomenon half the world experiences and embrace it instead.

View the entire video below: