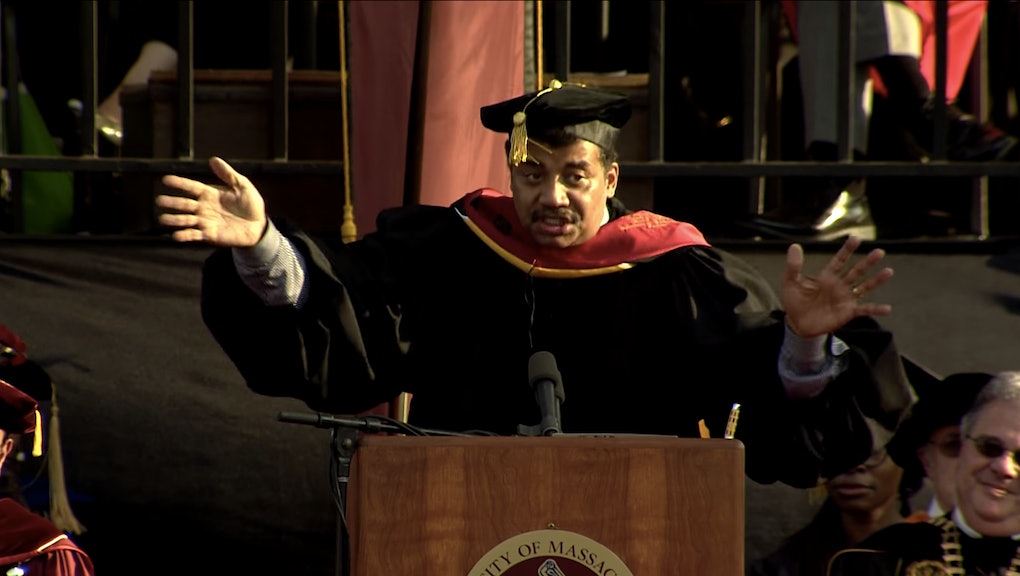 He covered an array of topics: education (your grade-point average doesn't define you, thank goodness), politics (we need to stop voting for people who believe the universe is 6,000 years old) and the American Dream (the pull-yourself-up-by-the-bootstraps thing is a myth).

Here are some of his finest gems.

1. Don't worry about your GPA.

"Your grades, whatever is your GPA, rapidly becomes irrelevant in your life. I cannot begin to impress upon you how irrelevant it becomes," he said "Because in life, they aren't going to ask you your GPA. ... If a GPA means anything, it's what you were in that moment — and it so does not define you for the rest of your life."

2. The real dangers of society:

"The most dangerous people in a free society are those who don't know ... but think you do know, and have power over legislation that would affect others, that is dangerous," he said. "Those are the signs of the end of an informed democracy."

"Science matters." [Crowd cheers.] "Think about this: Cavemen and women, they had clean air, fresh water, their food was free-range, yet their life expectancy was 35," Tyson said. "Something else matters that improves your life expectancy than just the search for clean air and clean water. There's more going on in our lives brought to you by innovations in science and technology that improves your health, your wealth, your well-being. Just consider that before you start saying, 'I don't like science, I don't want science.' Well, move the hell back to the cave."

"So if there is a politician who is sure the universe is 6,000 years old, it's because there are people walking among us who believe that. ... The laws of physics affect us all ... whether or not you believe in them."

"I think on some level, role models are overrated. ... Growing up in the Bronx ... had I required as a prerequisite that another black man from the Bronx had become an astrophysicist for me to become one, I'd still be in the Bronx," Tyson said. "If you require a role model who looks just like you to be something you wanna be and you can't find one, is that a reason to not be what you wanna be? No!"

6. How to put it all in perspective:

"The universe is bigger than you are. That sounds obvious but some people don't really know that," he said.

(If you don't, here are some images that will make you feel very, very small.)

"Do not forget that Earth is really good at killing you," he said. "Ninety-seven percent of all the species on Earth that ever existed are now extinct ... It's our ingenuity, in spite of that fact, that prevents it."

8. We can prevent government surveillance.

"We used to say we're the leaders of the free world here in America. Russia, they're not free. They have to show their IDs everywhere they go. That country spies on their own citizens. I remember saying that about the Soviet Union. ... If the KGB had the surveillance that America has today on its own citizens, they would totally dig that back in the Cold War," Tyson said.

"So I don't know what has happened to the world. But you're up next in the batter's box. It's up to you [to fix this]."

9. The truth about the American dream:

"We live in a world where not everyone has the urge to help others. ... It is OK to encourage others to pull themselves up by the bootstraps. But if you do, just remember that some people have no boots," he said.

Watch the commencement speech below: