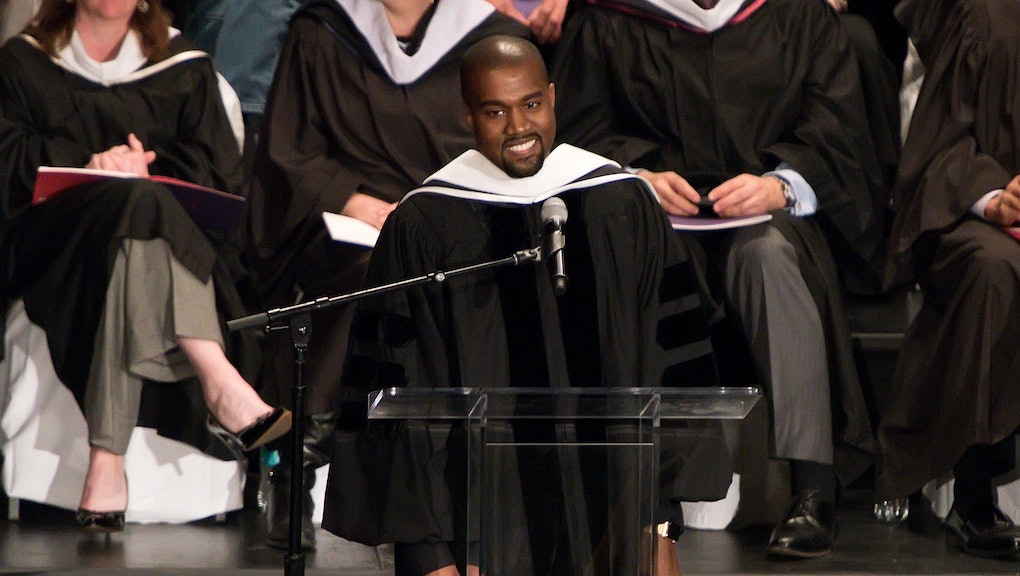 In One Quote, Dr. Kanye West Proved Why He Deserves His Honorary Doctorate

The School of the Art Institute of Chicago awarded Dr. Kanye West an honorary doctorate Monday. Though this is a prime moment for people to slam him for thinking too highly of himself, the Chicago native and college dropout accepted the award with a surprisingly humble speech.

A doctorate is a high honor. But if anybody doubts West's merit, they need only look to his lecture Sunday evening at the school. During his hourlong Q&A, West spoke about hip-hop stereotypes, dumbing down his music and compromising for art. And he proved he truly knows what art is all about:

An excellent point: In a world where social currency is as valuable as original thought, artistry naturally becomes devalued. But it's the job of artists like those at SAIC, and West, to hold up the value of original artistic thought over socially acceptable norms. Especially if that means making mistakes in the process.

It also proves that West's often divisive public behavior fits well into his artistic project. Prior to his speech, opinions at SAIC varied over whether honoring him was the right move. "Many lean towards 'no' because of the rapper's behavior," an SAIC student wrote for Complex. The behavior in question likely includes the rapper's repeated and highly public outbursts, like this year's Grammy Awards in which he crashed Beck's acceptance speech or the infamous moment he called out President George W. Bush on national television.

But ultimately that's what makes West a great artist — he tries to get away with whatever he can. That's not a defense of his arrogant behavior or outbursts so much as it is a defense of an artist's right to make mistakes. Because no transformative art has ever come of playing it safe, and no one understands that better than Dr. West.

Listen to the full lecture here.