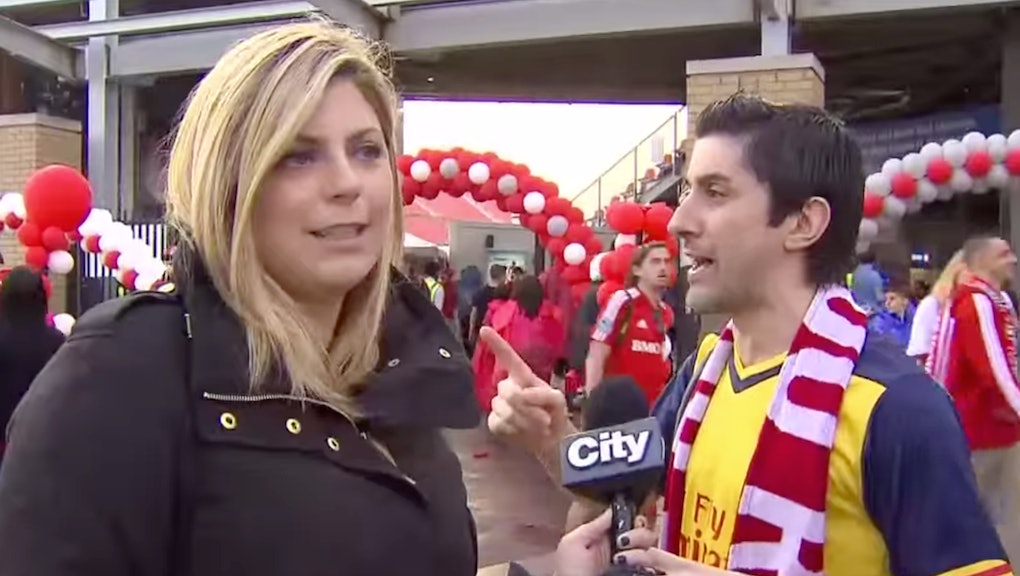 A female Toronto reporter flipped the script on a group of Canadian soccer fans who interrupted her live broadcast with a misogynistic prank Sunday.

CityNews correspondent Shauna Hunt was covering a Toronto FC game in Calgary while a group of young men repeatedly shouted "fuck her right in the pussy" in an attempt to ruin her shot. According to CityNews, Hunt "patiently endured several instances of the degrading phrase before confronting some of the perpetrators."

The result was glorious. First, she demands that the man who shouted the phrase explain himself, asking, "So were you guys waiting around to see if you could could 'F her in the P' me on live TV? Can I ask why you would want to do something like that?"

The surprised soccer fans, who apparently did not anticipate Hunt fighting back, tried to justify their behavior and did it very poorly.

When Hunt asks tougher questions, the flustered harasser gets nervous about the presence of cameras and basically rage-quits when the reporter gets the upper hand:

But Hunt wasn't done, giving him a well-deserved lesson in manners:

Ultimately the men seem to feel they won the argument and walk away apparently pleased with their own cleverness. But that's before this clip started getting posted everywhere online. Now that's how you publicly humiliate a misogynist who just tried to humiliate you in public.

Come at the king, you best not miss, bro.

A terrible Internet meme: There's a reason Hunt has been experiencing this kind of abuse from random trolls lately: a dumb dude-bro Internet meme that has persisted, zombie-like, long after it should have been clear it wasn't actually funny.

"Fuck her right in the pussy" jumped to the real world after a series of videos made by a man named John Cain purported to show local news broadcasts interrupted by various people shouting the titular catchphrase. Cain has since established the original videos were hoaxes but that didn't stop all the awful people of the world from deciding to harass (mainly female) news reporters with the increasingly unfunny joke.

According to CityNews, Calgary police say the prank constitutes an offense that warrants a charge and arrest for publicly "fighting, screaming, shouting, swearing, singing or using insulting or obscene language." Breakfast Television's Melanie Ng added the problem has grown to the extent where it is "not just guys, but women doing it and again of all ages. You're seeing little girls and women in their 40s and 50s yelling in the background."

Hopefully this dumb craze will burn itself out sooner rather than later, though as Salon's Mary Elizabeth Williams points out, women get this kind of treatment all the time. At least this particular incident ended in a properly satisfying way.