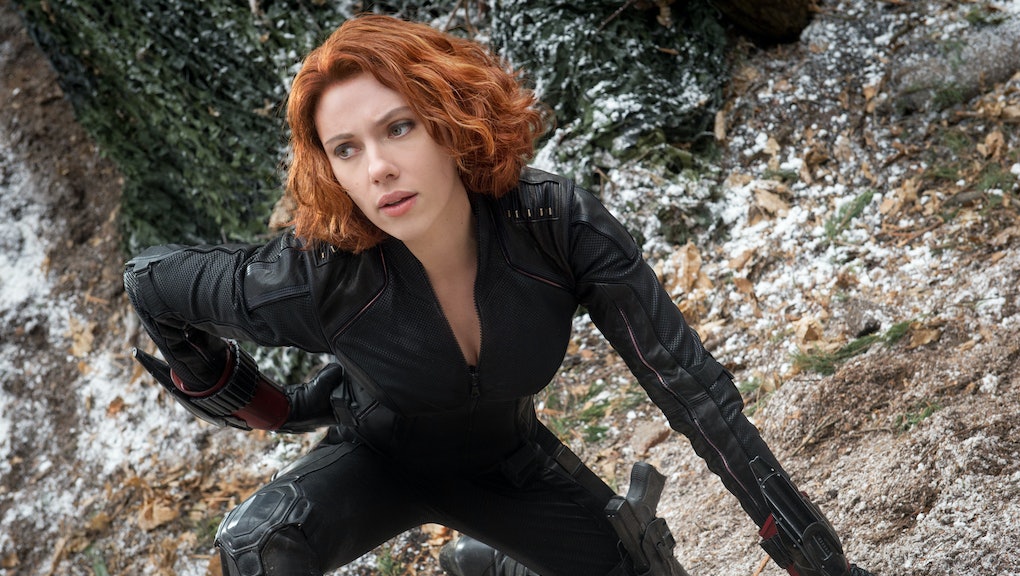 Avengers fans looking to find toys and merchandise from the ensemble's only female member, Natasha Romanoff aka Black Widow, will be out of luck this spring. Despite Black Widow's integral role in the recently released Avengers: Age of Ultron, toymakers at Hasbro and Mattel decided not to include the ass-kicking superhero in their official merchandise, the Daily Dot reports.

In one of the movie's most stunning action moments, Black Widow drives a speeding motorcycle out of a hovering "Quinjet." It's pretty awesome.

Unfortunately, it was not good enough for the toymakers, who decided to go in a different direction in the version marketed to fans. Hasbro decided to replace Black Widow with Captain America.

Meanwhile, Mattel felt Iron Man would be more suitable. In an almost scene-for-scene rip off, promotional photos for the toy show the superhero in the plane presumably just before the movie's critical moment.

Leaving out any crucial character would be bad enough, but Black Widow has a history of getting the short-shrift. She's an awesome Avengers character, and there is no good reason to treat her this way. While both Hasbro and Mattel were unavailable for comment, it seems obvious both toymakers decided to erase her under the tired assumption that adolescent boys would not buy toys featuring a strong female superhero.

Writing in the Mary Sue, an anonymous former Marvel employee spilled the dirt on the logic, saying the "exclusion of women from Marvel movie merchandise is completely purposeful." The employee added:

"While working at Marvel post-acquisition, I saw a deck circulated by Disney's Brand Marketing team. I'm prohibited from sharing the slides, but the takeaway is that, unlike the actual demos, the desired demographics had no females in it whatsoever. I asked my supervisor why that was. Ever the pragmatist, he said, 'That's not why Disney bought us. They already have the girls' market on lockdown.'"

Maybe it's easier shoving overdressed princesses at little girls and rugged superheroes at little boys, but it does both genders a terrible disservice to limit them to tired, preconceived roles. It's 2015; the world won't stop turning if boys buy dolls and girls buy action figures. Rather than pandering to yesterday's tastemakers, Marvel, Hasbro and Mattel should be leading the way.