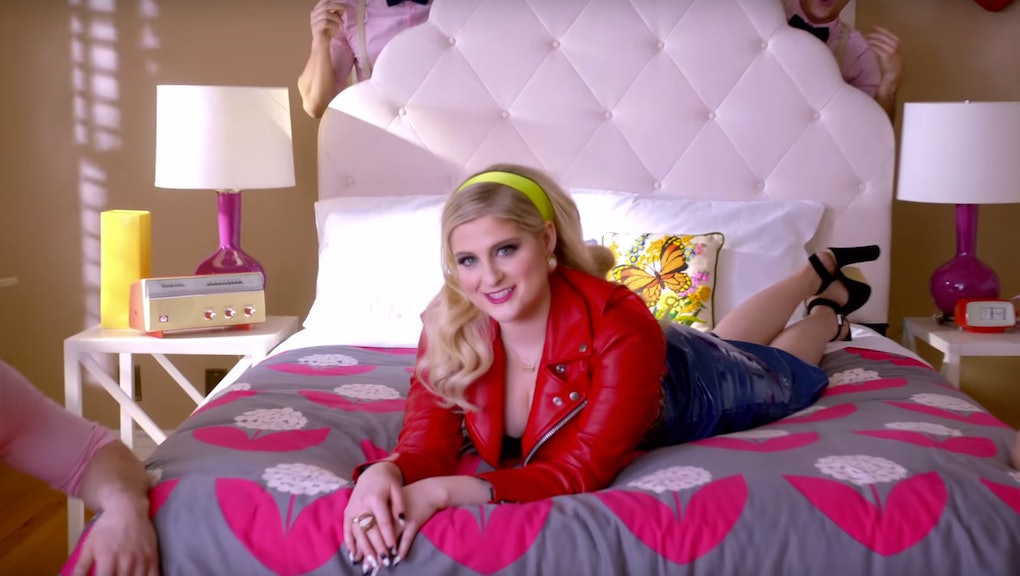 It's been nearly one year since pop singer Meghan Trainor released her debut single, "All About That Bass." Within the first month of the video's release, it racked up an impressive 1.6 million views on YouTube. Before long, the single hit No. 1 on the Billboard Hot 100, where it stayed for eight weeks and helped Trainor's debut album, Title, top the charts in multiple countries. Trainor came from nowhere, and she became one of the most-talked-about artists of the year. And she did it all on the mantel of empowerment — at least, that's what she'd have you believe.

"All About That Bass" was so successful in large part due to the idea that it was the new feminist anthem; after all, 2014 was the year of the booty and empowerment was in. But to those who read between the lines of Trainor's clever marketing ploy, it's clear as day that "All About That Bass" is as far from a feminist anthem as they come. Trainor's problematic stance extends far beyond that single. By simultaneously claiming a feminist mantle and advocating an anti-feminist agenda, Trainor has become a threat to all the gains that pop music has made in feminism recently.

What the lyrics are really saying. The messages in Trainor's songs are often ostensibly about encouraging healthy self-confidence. "I hope ['All About That Bass'] helps girls love themselves more, because they're adorable. Women too," Trainor told Glamour. The issue, however, is that those supposedly empowering lyrics encourage impressionable girls to be happy with themselves only when men deem them acceptable. People criticized "All About That Bass" for its skinny-shaming, but even more concerning is that Trainor claims your worth comes from what men think of you.

The crown jewel of Trainor's anti-feminism is easily "Dear Future Husband." When the video for "Dear Future Husband" hit YouTube in March, many rightly claimed that her message was sexist. Trainor's lyrics advocate outdated gender roles ("Cause if you'll treat me right / I'll be the perfect wife / Buying groceries"), seeking self-worth based on men's opinions ("If you wanna get that special lovin' / Tell me I'm beautiful each and every night") and, of course, confirming the idea that all women are crazy, emotional creatures ("You gotta know how to treat me like a lady / Even when I'm acting crazy"). But those who defended Trainor claimed that it was just a song and shouldn't be taken so seriously.

"I don't believe I was [being sexist]," she told MTV. "I think I was just writing my song to my future husband out there, wherever he is. He's chilling right now, taking a minute getting ready for me; it's going to be great."

He's getting ready — doing crunches and 200 pound dead lifts so he's ready to be strong enough to impress Trainor.

Not a role model at all: Trainor's public appearances and interviews are only worse. While she claims to be a voice for girls struggling with their self-image, she doesn't seem to understand what it really means to be happy with yourself. "I've been in that dark place and I've been sad about my looks and my insecurities," she told Style Collective. "Nothing really changed for me until this ['All About That Bass'] video came out and I got all the positive comments." Trainor is not qualified to be the spokesperson for self-confidence when she continually advocates for finding it from external validation.

It isn't just that she advocates external validation, though; she actively glorifies some of the negative consequences of pervasive sexist attitudes. In a recent interview with ET, Trainor said, "I wasn't strong enough to have an eating disorder. I tried to go anorexic for a good three hours. I ate ice and celery, but that's not even anorexic. And I quit. I was like, 'Ma, can you make me a sandwich? Like, immediately.'" This is a classic example of Trainor's misguided perspective; anorexia isn't weak or strong, it's a mental illness and certainly not something women should aspire to.

So we need to make very clear that Trainor is not a feminist singer: She's riding the coattails of pop feminism and pulling it off the tracks. Trainor's music acts under the guise of feminism: Women should be treated with respect and equality. But time and time again, her music and public appearances are not only anti-feminist, but also sexist. We need to call Trainor what she is. Maybe then she can become something greater.