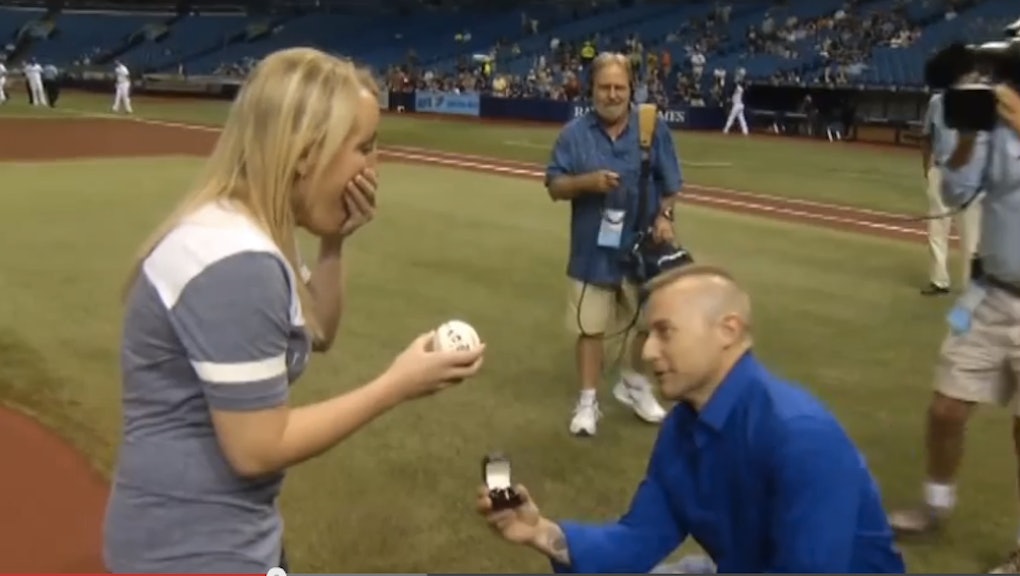 When Melissa Dohme was 20 years old, her boyfriend stabbed her 32 times and left her for dead. The 2012 attack rendered Dohme one of the 1 in 3 American women who are physically abused by a partner in their lifetime. But Dohme refused to merely become a statistic: She now uses her experience to encourage other survivors of such violence — and incidentally found herself at the center of an unexpected love story.

At her side throughout her courageous journey was the paramedic who saved Dohme's life: Cameron Hill. Although Hill said Dohme's injuries were the most gruesome he had ever seen, he said he had sensed they would see each other again, the Tampa Bay Times reported. The two met again when Hill saw Dohme speak at a church in Clearwater, Florida, and they soon became a couple.

Now, three years later, the two are engaged: Hill proposed to Dohme on Monday at a Tampa Bay Rays — right after she threw the ceremonial first pitch for her advocacy work.

Not all survivors have access to the resources and care they need after abuse. Some face socio-economic barriers such as financial dependence on abusive partners, for example, and a lack of public resources to address this. Survivors of domestic violence are one of the most underserved homeless populations: For example, less than 1% of supportive housing in New York City is designated for domestic violence survivors, according to the New York Daily News.