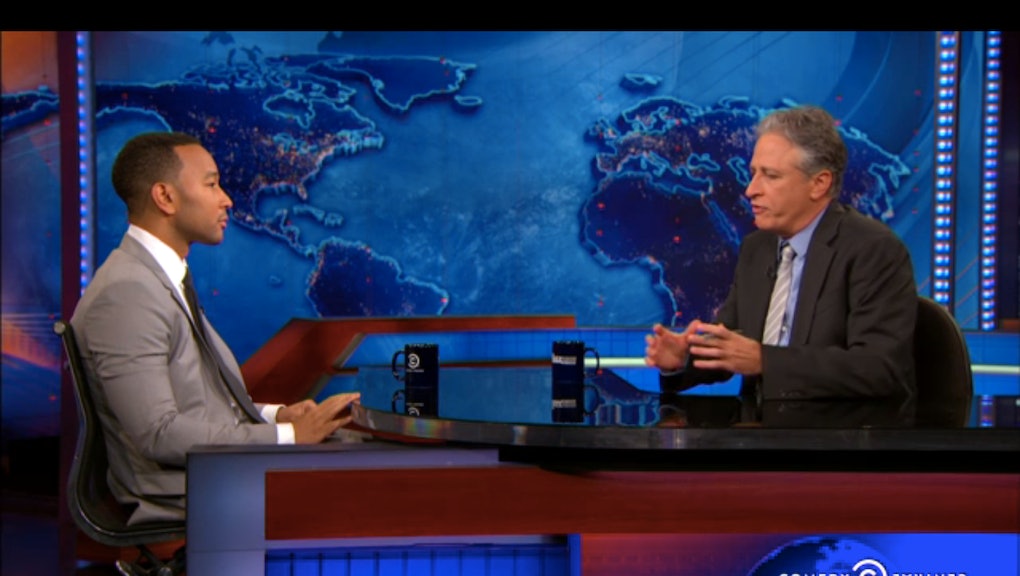 These are the facts: Though some pundits would have us believe that racism is overblown — See: Glenn Beck on Michelle Obama — Legend and his new film paint a compelling picture that shows quite the opposite. Southern Rites shows just how firmly institutionalized racism is to this day. And to all those people who think racism ended when we got a black president, Legend has a pretty good answer.

"We don't want to talk about racism all of the time," Legend told Stewart. "If it weren't here, if we didn't have to deal with it every day, we would love for it not to be the subject of conversation. We would love not have to keep bringing this up but it's killing our kids, it's resulting in so much pain and suffering for our community, so we have to bring it up."

Southern Rites focuses on the events that led to the murder of 22-year-old Justin Patterson, one of many young black men today whose name became familiar only after death. The idea for Southern Rites came from a New York Times Magazine feature story, published in 2009, about a Georgia high school that held segregated proms for decades after schools were integrated. Director Gillian Laub was investigating the segregated proms when she heard about Patterson's case in nearby Toombs county.

"This is a story that needs to be told," Laub said in a press release, according to the Huffington Post. "This film is about giving a voice to the people of Montgomery and Toombs counties [the two counties divided by race]. This is their narrative."

Legend's real work: Legend's new film is very much in line with his other social advocacy work. In February, he and rapper Common took the stage at the Oscars for a powerful performance highlighting the music from the film Selma. When the duo won the award for best original song, they used the stage as a platform to talk about mass incarceration.

"We know that the Voting Rights Act that they fought for 50 years ago is being compromised in this country today," Legend said in his acceptance speech. "There are more black men under correctional control today than were under slavery in 1850. When people are marching with our song, we want to tell you that we are with you, we see you, we love you, and march on. God bless you."

With his Daily Show appearance, Legend proved yet again how invaluable he is in the fight for justice for all.