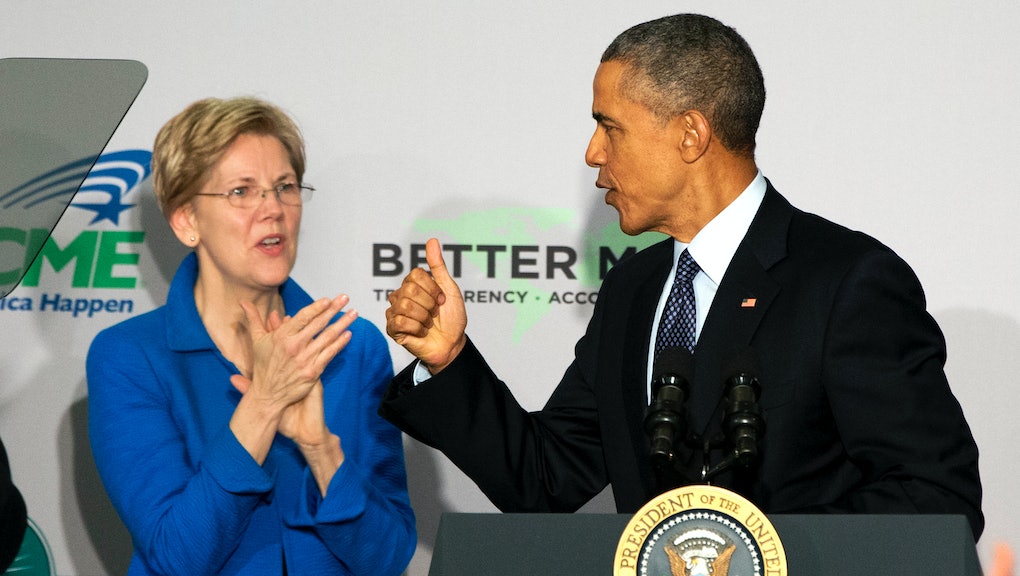 The Democratic Party's internal rift over the fate of a controversial White House-backed free-trade deal opposed by liberal antagonists lined up behind Sen. Elizabeth Warren (Mass.) has spilled over into an ugly back and forth around comments President Barack Obama made rejecting Warren's criticism of the prospective pact.

This latest flare-up, centering on the allegedly "sexist" tone of Obama's remarks about Warren, is the symptom of a more fundamental divide between Senate liberals and more moderate Democrats on Capitol Hill and in the administration. The episode reveals a split that will reverberate throughout the party over the next year and a half as the presidential campaign unfolds, and the issues at hand will go a long way toward defining the Democratic agenda over the coming years.

What he said: Sen. Sherrod Brown (D-Ohio), one of Warren's chief progressive allies, told reporters Tuesday that Obama had been "disrespectful" to his colleague during an interview published this past weekend.

Speaking to Yahoo News, Obama — caught now in a long dispute with Democrats who successfully held up his pending 12-nation Trans-Pacific Partnership agreement with a vote Tuesday in the Senate — called Warren's position "absolutely wrong."

"The truth of the matter," Obama said, "is that Elizabeth is, you know, a politician like everybody else."

Obama's offense, Brown claimed Tuesday, came in the president "calling [Warren] 'another politician,' then "referring to her as first name, when he might not have done that for a male senator, perhaps?"

Brown, who according to BuzzFeed has been addressed publicly by the president as "Sherrod" on at least three occasions, was backed by National Organization National president Terry O'Neill.

"Yes, I think it is sexist," O'Neill told the Hill. "I think the president was trying to build up his own trustworthiness on this issue by convincing us that Senator Warren's concerns are not to be taken seriously. But he did it in a sexist way."

By Wednesday morning, the White House and its friends on Capitol Hill were lining up to defend Obama and his choice of language.

"I'm confident after [Brown's] had a chance to look at the comments he made yesterday that he'll find a way to apologize," Press Secretary Josh Earnest said during an appearance on MSNBC's Morning Joe. Later on the show, Sen. Claire McCaskill (D-Mo.) dismissed any unseemly implications, noting Obama had "went to bat for Elizabeth Warren" when the future senator was fighting to create to the Consumer Financial Protection Bureau.

Why they fight: The driving issue here is less Obama's use of proper nouns than the TPP, a free-trade agreement liberals say doesn't do enough, as currently composed, to protect American workers from the realities of a globalized economy. If the deal is signed, U.S. businesses would have better access to foreign markets — both for the purpose of selling domestically manufactured goods but also to cheaper labor abroad.

Obama and more centrist Democrats, along with almost all of the Republican congressional caucus, argue that because trade is inevitable, it's better to have a strong hand in writing the rules. The actual language of the prospective agreement remains mostly classified, as it includes sensitive negotiating positions that the administration does want made public.

Future of the party: The debate is beginning to permeate the early stages of the Democratic presidential primary campaign, with Sen. Bernie Sanders (I-Vt.) staking out a strong position against the deal. Former Secretary of State Hillary Clinton, who was running the State Department as the negotiations took shape, has shown signs of hedging.

"Any trade deal has to produce jobs and raise wages and increase prosperity and protect our security," Clinton said, inscrutably, when pressed during an April 21 appearance New Hampshire for her opinion. "We have to do our part in making sure we have the capabilities and the skills to be competitive."

The TPP question and the underlying divide on economic issues inside the Democratic Party are expected to broaden as Obama's influence begins to fade in concert with his remaining time in office. Characters like Clinton, Sanders, Warren, Brown and Wall Street-friendly senators like New York's Chuck Schumer, the next Senate minority leader, are all ramping up their efforts to win control of party agenda in the post-Obama years.

The fight is inevitable. Whether it is fair and friendly or takes Democrats down a self-destructive spiral remains to be seen.