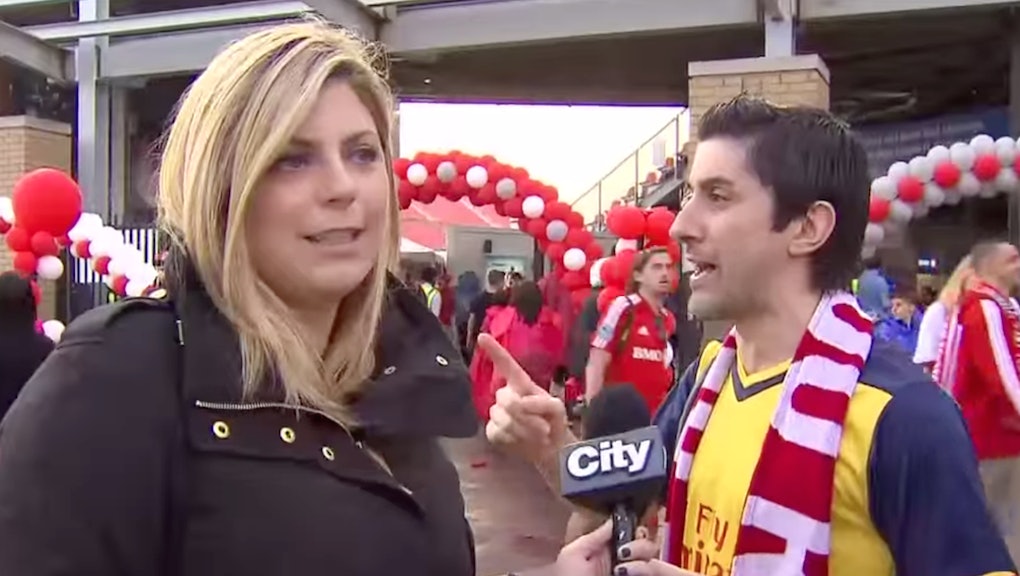 One of the trolls that hurled obscenities at CityNews reporter Shauna Hunt during a Toronto FC game in Calgary on Sunday has found out the joke is on him.

Power transmission and distribution company Hydro One told the Toronto Star assistant network management engineer Shawn Simoes, who made $106,150 last year, has been fired from his position after he was caught taunting Hunt on television. Simoes, the Arsenal fan seen in yellow below, began goading Hunt after she confronted his friend for yelling "fuck her right in the pussy" in the background of her broadcast.

"I hit my limit and I had to push back," Hunt told the Associated Press of the incident. "I wasn't going to stand for it anymore. It was time to say something."

Hydro One, for their part, was also not going to stand for it.

"Regarding the incident at the Toronto FC game between a reporter and fans, Hydro One is taking steps to terminate the employee involved for violating our Code of Conduct," a Hydro One spokesman told the Star. According to 570News, Simoes is himself a soccer player who played for Wilfred Laurier University from 2003 to 2005 and more recently his company league.

The Star identified another man seen in the video as a Cognex Corporation staffer who also graduated from Laurier, but was told by the employer that the matter would be handled privately. Maple Leaf Sports and Entertainment is reportedly also attempting to identify all four men in the video to ban them from its sporting facilities.

Ontario Premier Kathleen Wynne even took to Twitter to denounce the pranksters, saying the abuse was "no joke."

While the punishment might seem harsh, Simoes should have anticipated that sexually harassing a woman on national television would have actual consequences. Here's hoping that crude comment was worth $100,000 a year and watching soccer from home for the foreseeable future.