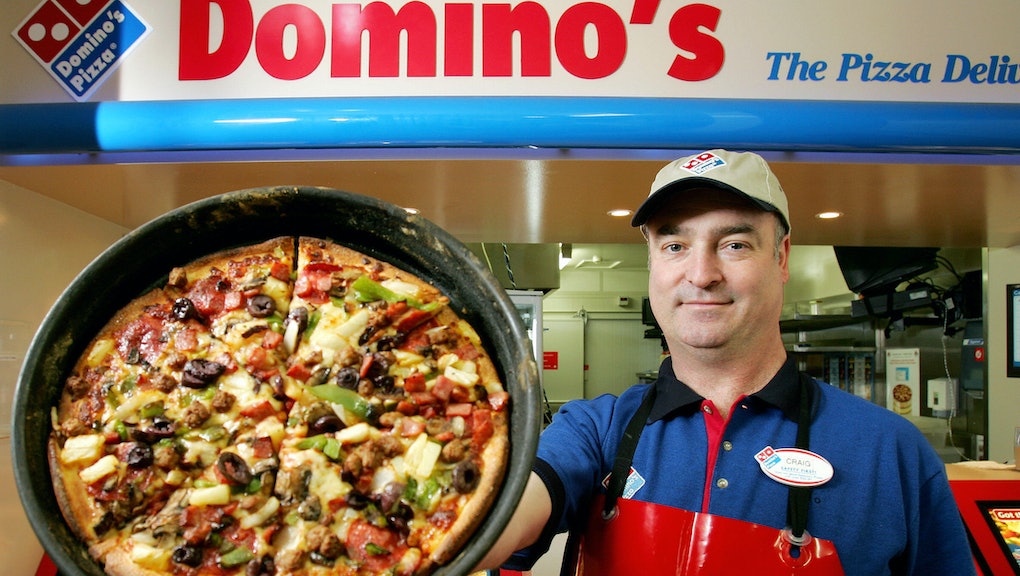 You Can Now Order a Pizza With Just Emoji — But Should You?

In an effort to better reach the stomachs of time-crunched customers, Domino's announced on Tuesday that it will soon accept orders via tweet. Regular customers have it even sweeter — all they need to do is tweet the pizza emoji and they can have a steaming hot pie at their door in a flash.

"It's the epitome of convenience," Patrick Doyle, the CEO of Domino's, told USA Today. "We've got this down to a five-second exchange." The service is set to launch on May 20, and Doyle hopes that it will come as a lifesaver for busy pizza lovers. "We want to make it as easy as possible for people to order from us — and this is pretty darned easy," he said, according to USA Today.

Roughly half of the company's orders come from digital platforms, so the jump to Twitter is less head-scratching than it may first appear. Between this, its easy-to-use app, which features voice-activated software, and the fact that it has a 250-member tech team, USA Today's Bruce Horovitz may be on to something with his declaration that "Domino's has become something closer to a tech company that sells pizza."

The specifics of the service haven't been revealed, but they'll likely resemble similar services that have come before. Starbucks, for example, experimented with a "tweet a coffee to a friend" gimmick, and the Miami Dolphins are testing out a tweet-based beer delivery system that fans can use during games.

While services like this seem ripe for trolling — beers sent to wrong seats, people ordering pizza for their unsuspecting friends and family — Twitter is happy to play along. "Our hope is that advertisers will keep innovating this way," Twitter spokeswoman Genevieve Wong told USA Today. "Twitter is the best platform to be creative like this."

Given the overwhelming popularity and cultural capital emoji hold, Domino's may have just have broken new ground in pizza delivery. Sure, its pizza may not have the gourmet ingredients of your local parlor down the street, but the convenience factor counts for a whole lot.

Of course, just because you can order pizza on Twitter doesn't mean you should, and your wallet and waistline will take the fall if you overindulge. While apps like Seamless make ordering food online exponentially simpler, tweeting emoji takes this to a whole new level. Drunk texting, drunk tweeting and now drunk pizza-ordering — what will we have to worry about next?