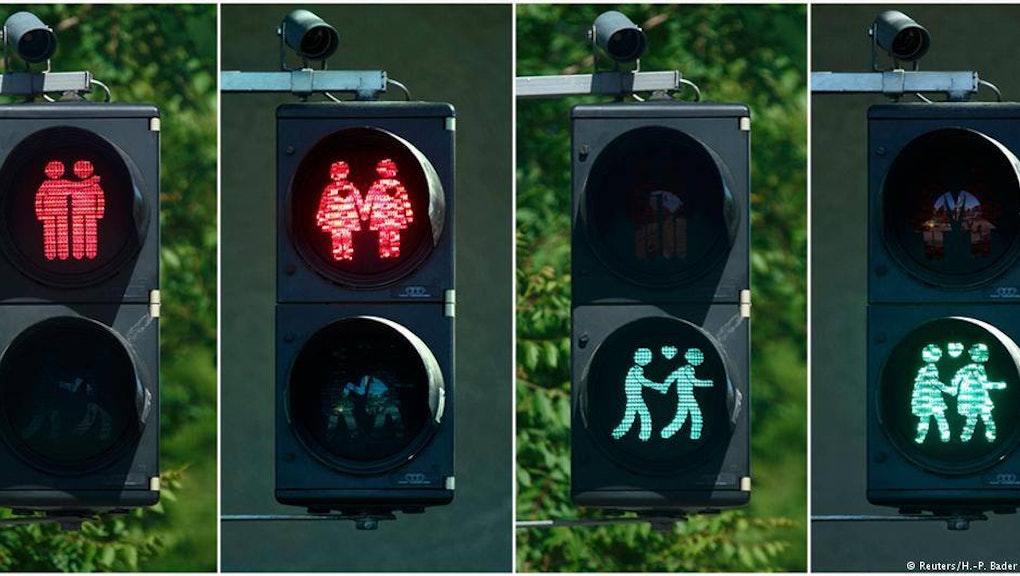 Vienna Traffic Signs Are Lighting Up with Gay and Lesbian Couples

This spring, pedestrians on the streets of Vienna are seeing double when crossing the road. To celebrate the upcoming Eurovision song contest and the Life Ball, Europe's biggest HIV/AIDS charity event, the local government replaced a number of traditional crossing signals with ones featuring pairs of straight and LGBT couples.

The move was intended as a show of solidarity with the LGBT community during a season when the city will play host to numerous big-ticket gay-themed events.

Dozens of such signals are planned throughout the city and are expected to remain up until June. The new crossing lights reportedly debuted to approval or indifference from most locals.

The crossings did however face somewhat-predictable opposition from local conservative groups in Austria. The right-wing Freedom Party announced it was filing a criminal complaint against Green Party lawmaker Maria Vassilakou, who is responsible for traffic matters in the city, claiming she and the city wasted more than $70,000 putting up the new crossings.

Vassilakou, meanwhile, said the lights were more than just symbolic, and the unusual images could slow down both motorists and pedestrians, thereby reducing traffic accidents.

The light-hearted gesture of support for the city's LGBT communities is a reminder of how far the continent has moved toward embracing gay rights. Today, nations such as Spain, France, the United Kingdom and the Netherlands have embraced marriage equality for same-sex couples. Further, Article 14 of the European Convention on Human Rights forbids any discrimination towards LGBT individuals. According to the EU's Handbook on European Nondiscrimination Law:

"Although Article 14 of the ECHR does not explicitly list 'sexual orientation' as a protected ground, the ECHR has expressly stated that it is included among the 'other' grounds protected by Article 14 in a series of cases."

Vienna's new crossing signals are certainly news, but shouldn't really be big news. As LGBT citizens in Europe and around the world continue to gain the rights and privileges enjoyed by everyone else, "controversial" expressions of support like this will hopefully become a lot more ordinary.