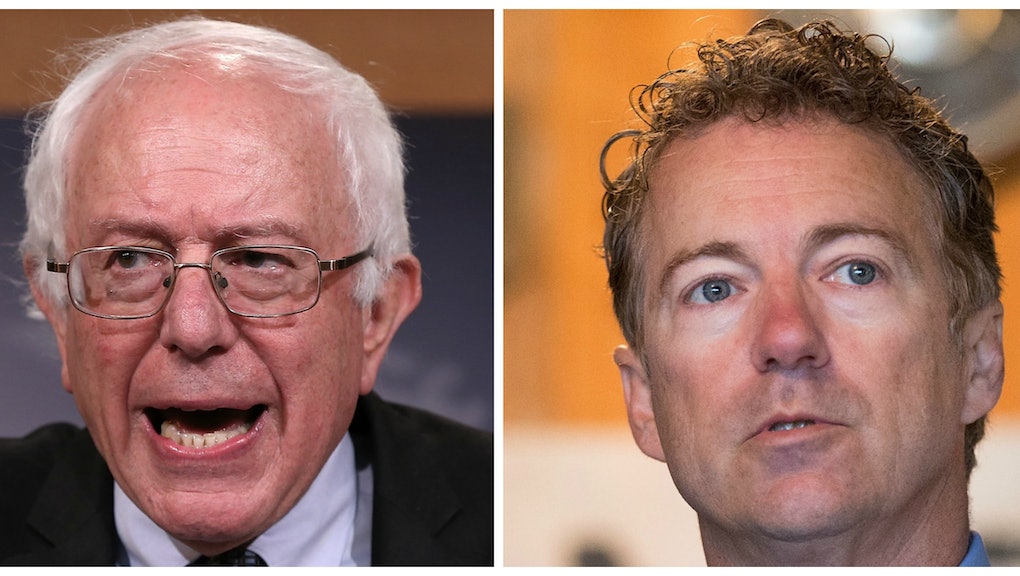 When a federal court ruled last week that the bulk collection of Americans' phone data was not legally authorized by the Patriot Act, the two presidential candidates with the most effusive responses came from different sides of the aisle.

Sen. Bernie Sanders, an independent from Vermont, caucuses with Senate Democrats and is now running in their 2016 primary. Republican Rand Paul, the junior senator from Kentucky, is counting on support from libertarians to carry him through the GOP gauntlet. On the morning of May 7, after the court's decision came down, their happy tweets landed just two minutes apart: "The phone records of law abiding citizens are none of the NSA's business!" Paul wrote, while Sanders went the more stern route, saying "the NSA is out of control and operating in an unconstitutional manner." Both used colorful graphics to underline their points.

On a range of issues, from the Fourth Amendment privacy rights cited in the surveillance ruling to criticisms of U.S. drug policy and its relationship to mass incarceration, Paul and Sanders inhabit a lot of the same political space. But a closer look at how they've financed past political campaigns reveals stark differences in how the two candidates are likely to approach their bids for the White House.

The numbers: Based on analysis of campaign finance records dating back to 1980, the nonpartisan organization Crowdpac found that Sanders received 62% of his campaign contributions from small donors giving less than $200. Paul, who was elected to the Senate in 2010, took in just 25% of his money in small sums.

You can see the breakdown in the chart below:

Thirty percent of Paul's campaign cash came from large donors, who gave in excess of $2,500, which is the cap for individual contributors. (Because primary and general elections are counted separately, donors can commit a total of $5,000.) By contrast, only 12% of the people who have donated to Sanders' campaigns have surpassed the $2,500 mark.

We do not, at this early stage in the campaign, have formal financial disclosures from the candidates. Past performance is not a perfect predictor of future results, and Paul is making a real effort to corner the market on small-dollar, right-leaning and libertarian contributors. According to the New York Times, his campaign brought in $1 million from more than 15,500 donors in the 30 hours after he entered the race on April 7, meaning the average contribution was around $64 over that period of time.

Still, Paul can be expected to solicit large and medium donors too; together they have made up 75% of his past contributors. Sanders is less likely to mix it up. He will bank almost exclusively on a hoped-for groundswell of relatively small donations. His campaign, which raised $3 million over four days at an average of $43 per contributor, will not be boosted by any dedicated super PAC support. Paul, according to the New York Times, is sending a top Capitol Hill aide to help run an outside group aligned with his bid.

Where's the money coming from? For a better understanding of who Sanders and Paul really work for, you can also take a look at who has bankrolled their political careers. Corporations and labor unions cannot give directly to candidates, but as detailed in the two charts below, both from the Center for Responsive Politics, they can and do encourage employees and members to give to certain causes or campaigns. Executives and union leaders can also set up political action committees to solicit donations which are then used to direct money into an election.

For Sanders, the record is pretty clear: 9 of his top 10 donor sources are labor unions. Only the American Association for Justice, home to the trial lawyer lobby, falls outside those interests.

Paul has a less labor-friendly donor base, including the National Right to Work Committee and Koch Industries, the source of billionaire brothers David and Charles Koch's fortunes. In fact, as numerous watchdog groups note, the Kochs actually play a large part in funding the NRTWC. At the top of the list is the Club for Growth, a Washington, D.C., think tank whose political arm is used to advance candidates who promise to cut taxes and shrink government:

Whatever Paul and Sanders share on certain hot button issues likely to animate the 2016 presidential contest, the hearts of their political support are poles apart. A simple look at the interests and individuals working to fund what will be long, expensive campaigns — and the manner in which they do it — offers more information about a candidate than any tweet, TV commercial or stump speech.