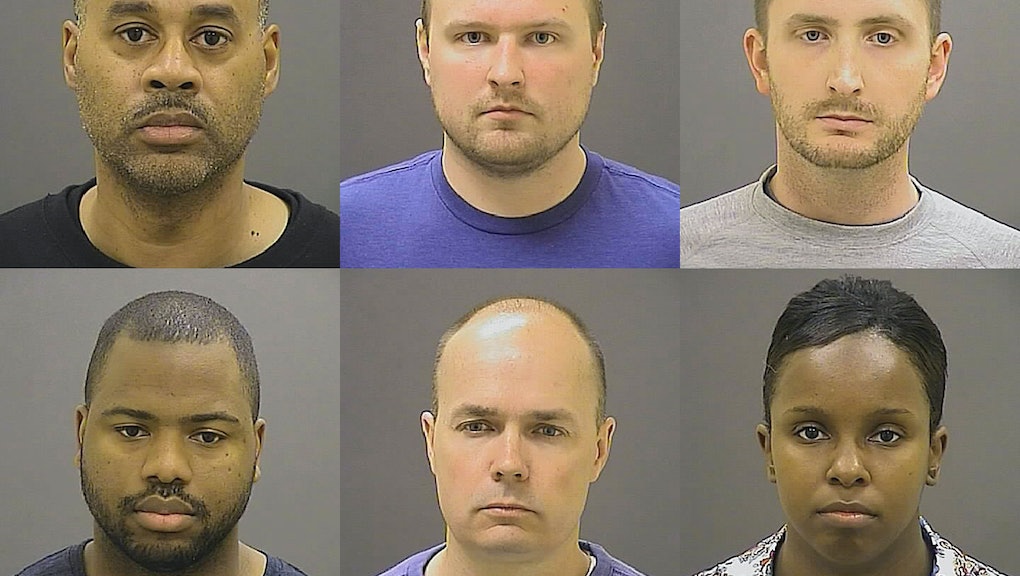 These are three of the Baltimore City police officers facing criminal charges in the death of Freddie Gray, a 25-year-old black man who suffered a fatal spine injury in their custody in April. They're not the only ones being charged: Brian Rice, Garrett Miller and Edward Nero are implicated as well, on allegations ranging from manslaughter to second-degree murder.

The difference is that the first three officers are black — which brings a complicated dimension to conversations about race and police violence in America today.

When Michael Brown was killed by a Ferguson, Missouri, police officer in August, the media highlighted a glaring disparity: 67% of Ferguson's population was black, while all but three of the city's 53-member police force was white. The police chief was white. So was the mayor and most of the city council and school board. The reporting implied that with such a racially lopsided power structure, it's no wonder such a fraught relationship existed between white law enforcement and the black population.

Then Baltimore happened. While much of the response to Ferguson's problems focused on diversifying the power apparatus through voting, Baltimore already had a black mayor (Stephanie Rawlings-Blake), a black police commissioner (Anthony W. Batts) and a relatively black police department. Clearly, this hasn't helped much — as Stacia L. Brown notes at the New Republic, the relationship between Baltimore's poor black residents and law enforcement, black or white, is still marked by harassment and even brutality.

"Interaction between black leadership and residents might not be predatory [like in Ferguson], but their relationship is navigated firmly within the parameters of institutional racism," she writes.

Proof of this came when the city erupted in protests and riots last month. It was triggered directly by the death of 25-year-old Freddie Gray while in police custody, but the unrest was also a response to years of police abuse and government neglect that affects housing, health and education in swaths of the city.

But how does it reframe our understanding of racism that the perpetrators of anti-black police can also be black?

There are numerous possibilities. Some observers — like former Washington, D.C., narcotics investigator Frank Starks — attribute the current dynamic to a shift in how police approach their jobs. During his 27-year tenure as a black officer in a majority-black district,  ending in 1996, the South Carolina native says he entered the force at a time when a push for diversifying police departments was underway.

He says law enforcement interactions with residents in even high-crime areas was not limited to arrests, raids and drug sweeps back then — police patrolled neighborhoods on foot and developed a rapport and personal relationship with their communities.

"Today, the police don't come in contact with communities on a friendly basis, without any crime involved," Starks told Mic in an interview. "I might've been called an 'Uncle Tom' from time to time, but overall, people had more respect for officers. We had more discipline then. We knew you had to treat people the way you wanted to be treated."

This suggests that the interpersonal relationships informing police and citizen interactions have fundamentally changed for the worst.

But Jelani Cobb at the New Yorker points to a broader set of issues:

"At some point soon, Ferguson, like Baltimore, may have more proportional black representation, but the socioeconomic trends in that city won't automatically change. Gray died 28 years after Baltimore's first black mayor took office, yet the statistical realities at the time of his death—a 24% poverty rate, 37% unemployment among young black men—show how complicated and durable the dynamics of race and racism can be."

These patterns were years in the making — following the large-scale oppression of black people through slavery, segregation laws only continued to impoverish, criminalize and disenfranchise black people. Police continue to enforce those laws firmly establishing race and class roles even decades after segregation laws were ruled unconstitutional, as Michelle Alexander outlines in her groundbreaking 2010 book, The New Jim Crow. Nonetheless, the practices of maintaining segregation — including criminalizing entire populations through mass incarceration and the war on drugs — continue. And the enforcers of these norms can be interchangeable.

As long as you're maintaining a white supremacist hierarchy, it doesn't particularly matter what your skin color is. Black people, and black police officers, are not immune to this dynamic.

It's why the system has been effective for so long.