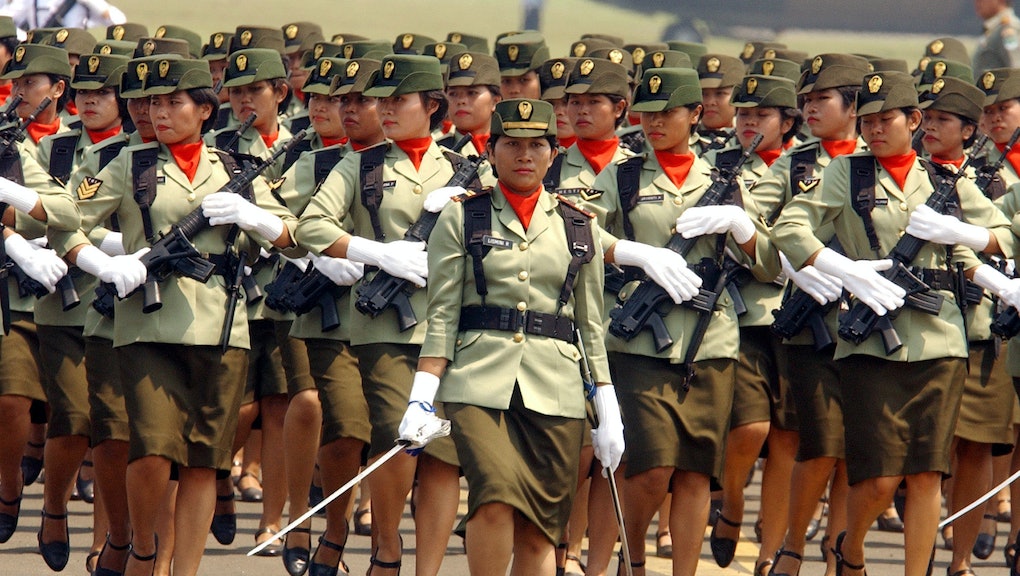 Human Rights Watch published a report on Wednesday urging the Indonesian military to abandon its practice of subjecting female recruits and fiancées of male recruits to so-called "virginity tests" in order to ensure they are not "naughty."

The Indonesian military uses the "two-finger test," which allegedly determines if a woman is still a virgin by assessing whether or not her hymen is intact. This test "has no scientific validity," according to the World Health Organization.

There are 876,000 members of the Indonesian military, and the country has 107,538,660 individuals who are "fit for service." Though exact figures of new recruits are unavailable, based on these numbers, the "virginity test," which HRW describes as being "cruel, inhuman and degrading treatment," affects a significant number of people.

"We need to examine the mentality of these applicants. If they are no longer virgins, if they are naughty, it means their mentality is not good," Fuad Basya, Indonesian military spokesman, told the Guardian in defense of the practice. "We will continue to carry out the test because to be a military person, the most important thing is your mentality. Physical and intellectual requirements are secondary."

Humiliation and violation. The HRW report includes excerpts from a number of interviews dating back more than 30 years with both the women forced into the test and a female Indonesian physician. All interviewees describe the test as a violating and humiliating experience. For some, it was akin to rape.

"Four years after I took the test, I married my fiancé," explained a retired air force officer who underwent the test in 1984. "Like most normal newlyweds, we took a honeymoon in Bali and we wanted to make love. But my body was so stiff. I cannot open my legs. I cried the whole night. We could only have sex [for the first time] two months later. It was because of the trauma that I had with that 'virginity test.'"

A female physician who administered the test said forcing resistant women into stirrups with their legs wide open was beyond "humiliation" and tantamount to "torture." Only women who were able to offer bribes or had military or political connections were able to avoid having the test, the report found.

Another November 2014 HRW report revealed female applicants for the Indonesian police force are subjected to the same process.

The "virginity test" is a global phenomenon. A 2010 HRW report highlighted India's use of the primitive "two-finger test" as part of the outdated forensic exam for rape survivors, which "involves a doctor inserting fingers in a rape victim's vagina to determine the presence or absence of the hymen and the so-called 'laxity' of the vagina." It was only in March 2014 this practice was finally banned in India.

This test is used elsewhere too. Afghan women trying to escape abusive relationships or forced marriages are often arrested under "moral charges." In order to get evidence that can be used against them in court, they are subjected to a "virginity test" by authorities. Some women in Brazil applying for state jobs have also been subjected to these tests, having to prove their virginity in order to be able to apply for the positions.

These "virginity tests" are unequivocally a violation of human rights and institutionalized misogyny. Greater pressure needs to be placed on countries that still employ them and implicitly use them as a weapon against women. Whether the pressure comes in the form of conditional aid or international pressure, this deplorable practice must end.