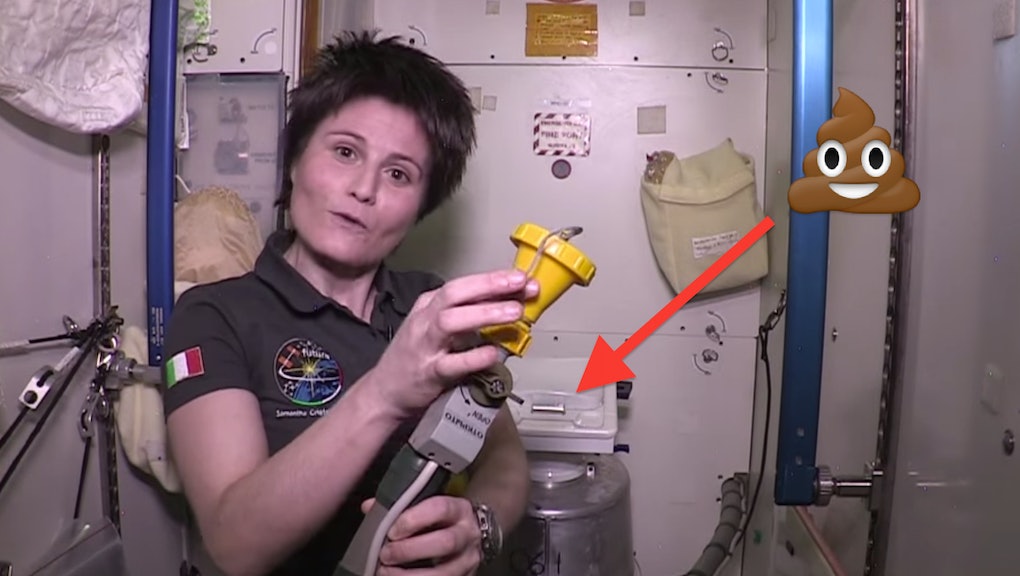 Pooping in space isn't like using an airplane toilet. There's no gravity, not even in the bathroom, so everything — ev-e-ry-thing — floats. So if you aren't careful, the last thing you want floating through the air is running amuck through a space station. Shit might literally hit the fan.

For decades of America's space career, the best way to corral personal evacuation was with, basically, a plastic bag. During the Apollo missions, Buzz Aldrin and Neil Armstrong would tape bags to their behinds whenever it was time to go. Even then, without the help of gravity, they couldn't rely on the, uh, "separation" we take for granted on the john.

Only recently have space programs updated their toilet systems. And it's not quite the comfortable ritual we enjoy on the ground.

In a video for the European Space Agency, Italian astronaut Samantha Cristoforetti gives a quick tour of the International Space Station's bathroom, which looks, more or less, like a storage closet, only with two significant differences.

This is the hose they use for No. 1. The tube is fitted with a fan. When that fan is switched on, it becomes a vacuum, which then sucks up all liquid.

No. 2? A little more complicated.

You're looking at a solid-waste container, which looks like a keg with a softball-sized "seat" — pretty much a hole in the top. It looks uncomfortable, but remember that with no gravity, having a weight-bearing seat doesn't make any sense. There's a plastic bag in the container, just like the Apollo astronauts used. But above the container is the same suction fan, which helps direct waste into the container, and not out into the personal space of horrified fellow astronauts.

With solid waste, Cristoforetti says, everything is put into the plastic bags, then pushed down into the waste container. The container is emptied roughly every 10 days.

But here's where the geniuses at NASA show their mettle. Through a hydraulic system, all liquid is sent into a container in the floor, which is outfitted with a urine-processing system. The ship actually turns astronauts' urine into potable water. They're drinking their own pee.

Living on Earth, we take gravity for granted. Rocket scientists had to find a way to make pooping easy and mess-free. Most of us don't get to see space in person — but at least we don't have to worry about urine flying around our homes.

Fascinated by life in zero gravity? Check out this video of how astronauts wash a bald head — or these jaw-dropping images that'll make you feel very, very small.