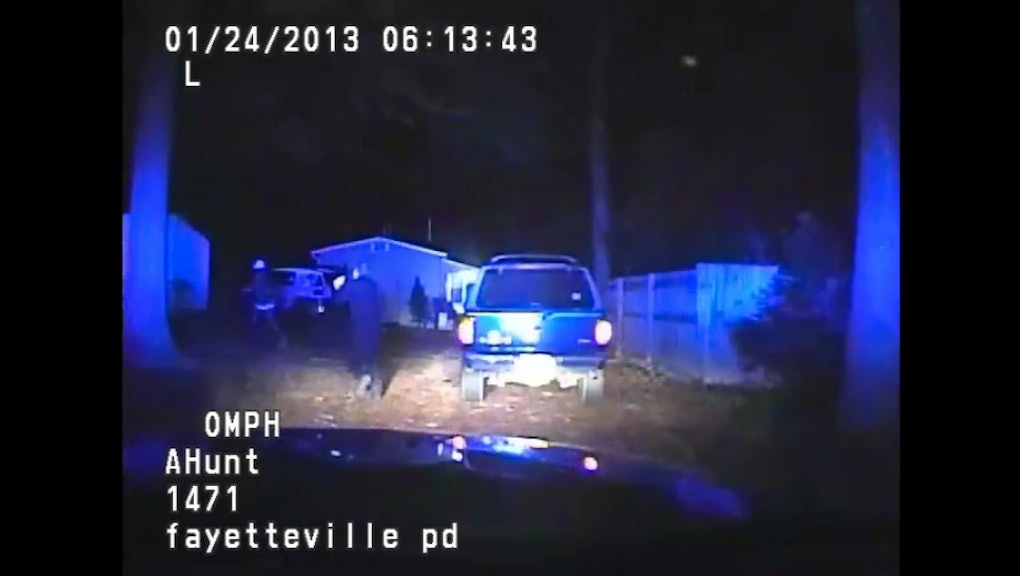 Disturbing footage has leaked of a police-involved shooting from Fayetteville, North Carolina, raising questions about police self-reporting and use of lethal force in that department.

On the night of January 24, 2013, Officer Aaron Hunt shot and killed 22-year-old Nijza Lamar Hagans during a traffic stop, but the Fayetteville police department has refused to publicly release the footage from the officer's dashboard camera, with the city's attorney citing "ethical implications which can easily be avoided."

Officer Hunt was cleared of any wrongdoing by Cumberland County district attorney Billy West shortly after the shooting. But the video — provided to Mic via the Intercept, which received it exclusively from an anonymous source — raises serious concerns about police-involved violence and the lack of transparency in how such incidents are filed and reported by officers.

Here is the video. (WARNING: graphic.)

The footage appears to show Hagans quickly exiting a Ford Explorer while Hunt is talking with him.

Hunt then draws his gun and shoots at Hagans several times at point-blank range. At this point, Hagans appears to drop something. The incident report states he had a .380 caliber pistol in his pocket, which he allegedly tried to draw on Officer Hunt and was later recovered underneath his dead body, according to the Intercept's review.

What happens next is especially troubling: As Hagans runs away, Hunt fires two more rounds into his back, at which point Hagans collapses and appears not to move anymore. Within minutes, at least 10 more police officers have gathered at the scene, none of whom attempt to give Hagans medical attention.

The rest of the video features recorded audio of Hunt verbally recounting the incident to a police official.

Hunt's and Fayetteville's history: A lawsuit filed by Hagans' family states Hunt has a history of using excessive force against the citizens of Fayetteville. It cites multiple complaints filed claiming he used not only his hands but "at least one of his police-issued weapons" to assault people, according to the Intercept.

More broadly, the Department of Justice is investigating the Fayetteville police department  — at Fayetteville Police Chief Harold Medlock's request — concerning its use of force policies, practices and training.

A recent study from the University of North Carolina at Chapel Hill also found that Fayetteville police disproportionately targeted black residents for traffic stops and searches between 2002 and 2013, with black drivers being stopped at a rate 81% higher than whites. This disparity became such a heated topic in 2012 that City Manager Dale Iman resigned over it. According to the Intercept, Chief Medlock has achieved "mixed results" in his attempts to rectify the problem, with much of the disparity still persisting.

Hagans, who was black, became subject to one such stop when Hunt, who is Native American, observed him running a red light and making "several furtive driving maneuvers such as darting onto a neighborhood street and into a driveway" on the night of January 24, 2013, the Intercept reports.

Though Hagans seems to have been armed, the two shots Hunt fired into his back and the subsequent handling of the incident by the Fayetteville police provides illuminating insight into how little the public actually knows about the way these incidents are translated from real-life into (often manipulated) official reports.

What the report doesn't say. According to a review of the incident by the Intercept's Spencer Woodman, there is no mention in the D.A.'s memo absolving Hunt of any wrongdoing of the fact that he shot Hagans in the back, only that Hagans sustained "multiple gunshot wounds to the chest." The memo also presents Hunt's account of the incident as authoritative, despite no audio corroboration, and with no mention of Hunt's microphone — which would have recorded his interaction with Hagans — being switched off at the time of the stop.

That these key facts were lost in the translation is especially notable after the Walter Scott shooting in North Charleston, South Carolina, in April. Officer Michael T. Slager, who fired eight shots at the unarmed Scott's back as he ran away, omitted important details in his account of the incident and lied about others to make it seem like Scott had taken his stun gun and posed an imminent threat to his safety.

Officer Hunt is not Officer Slager, of course. And while North Carolina law allows the police to withhold footage from their dashboard cameras from the public, it's unclear whether that's in the public's best interest. Because what Nizja Lamar Hagans' death reveals is this: We know very little about how the police and their allies handle incidents likes this. And seeing first-hand the discrepancies between what we are being told and what actually happened builds a strong case for greater transparency moving forward.