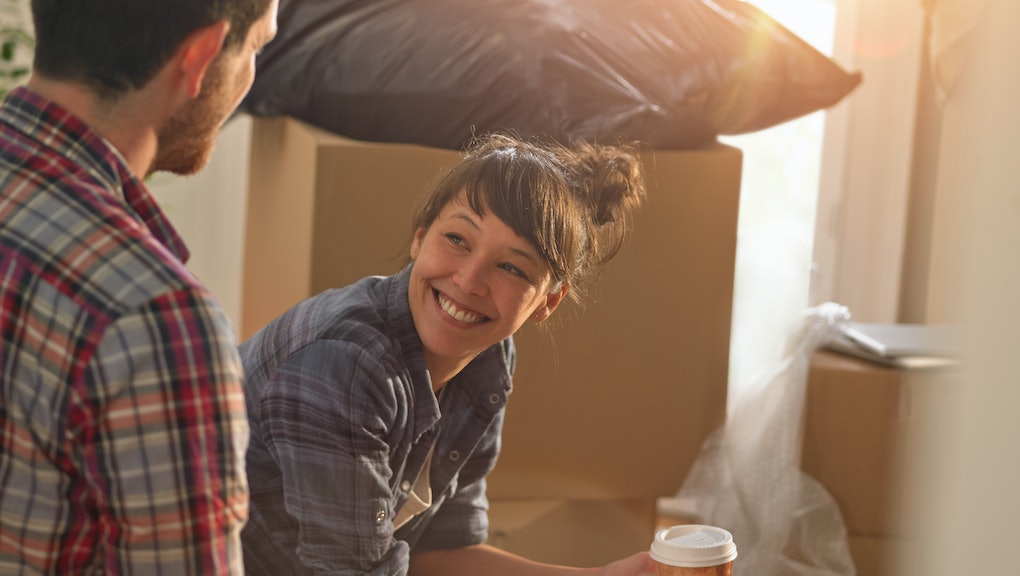 "I always vowed I would never move anywhere 'for a man,'" Ashley, a 28-year-old New Yorker, said. "Yet, here I am taking two months to move to Virginia to be closer to my boyfriend."

In an age when women are encouraged to "lean in" with all of our might, the idea of putting careers or vibrant lifestyles on hold and moving for a romantic partner seems like a relic of the past. Women today are outpacing men in college enrollment, out-earning men at work and marrying at the record-late age of 27.

With that independence should come the ability to make whatever life choices we want. But a modern woman can get the creeping feeling that making concessions for love — especially ones that involve leaving a job and changing zip codes — is one choice that runs counter to her proud, independent feminist beliefs.

But guilt or judgment over choosing "love" or "a man" may miss the point. As women like Sheryl Sandberg prove, prioritizing love and relationships is actually one of the most empowering decisions any woman — even the most career-driven among us — can make.

Booking a guilty trip: After two and a half years of long-distance dating with a military man stationed in Virginia, Ashley knew that in order for her relationship to last, she was going to have to take the next step. He had another four years left in his service; for things to work, she'd have to move.

But, as the founder and CEO of her own communications company, Ashley is as ambitious as they come, and moving required giving up the high-energy professional environment she thrives in. Running through a nervous checklist in her mind, Ashley wondered, "If I give up something for another person, am I being weak?"

"I debated for months about whether or not the move was right for me," she said. "I sought counsel from business advisers and other similar women entrepreneurs who had moved for their significant others — turns out, there are more than I thought."

Slate tackled the guilty internal debate had by such women in a series called Best Laid Plans. "Over the past few years, there has been a great deal of discussion about why women aren't achieving as much in their careers as their male counterparts," the site wrote in the series introduction, one explanation being "husbands' careers taking precedence."

"When Michel went on the job market, we had been together for a year. I made a big deal out of feeling like I couldn't move somewhere with him ... I felt like I was too old to say I moved somewhere for my boyfriend," one woman named Leah told Slate. "I worry that [following him to D.C., where they now live] is anti-feminist, but I think about how I'm glad."

That worry reflects a human reality, and not just a female one: We are, as Bad Feminist writer Roxane Gay called it, a "mess of contradictions." For women, that mess includes wanting to be independent while also wanting to be taken care of, or wanting a growing career while also wanting love and family. Submitting to the latter needs, Gay says, can make one feel like a "bad feminist."

But, as she writes in her book by the same title, submitting to the "bad" choice is human — and in fact, sometimes it's not only the happiest choice, but the smartest one. As author Ayelet Waldman argued in her 2005 New York Times essay, being a "bad mother" by loving her husband more than her kids was in fact the best thing for the family: It makes her a happy, fulfilled human who needn't pin all her desires and passions on her children, which only made her a better mother.

Prioritizing the "bad" choice over the "good" one was the best decision she could make for both.

Giving up to gain something more: Jennifer*, 25 and a lifelong New Yorker, faced the dilemma when she found out her long-term boyfriend was accepted to Yale Law School. "We had a series of very real conversations about what kind of life we wanted to have, if it included each other, and the sacrifices we were willing to make for each other," Jennifer said. The pair got engaged and Jennifer pivoted her career plans, joining her now-husband in New Haven, Connecticut.

"Some of my friends think I made a very traditional decision to follow my husband to school," she said. "However, I would argue it takes a bold, powerful, strong woman with a sense of self to take the risk of moving to a new place where her partner would be busy studying and in school all the time." Next year, she'll follow him to New Orleans, where he landed a clerkship for a federal judge.

Melinda*, 27, had a similar challenge when her boyfriend's job transferred him from the east coast to San Diego. Her friends warned her of making the jump on his terms and "not relying on the boyfriend emotionally," she told Mic. But the truth was, she was excited at the prospect of living in California. Ultimately, she said, the decision was for herself and her own happiness — not his.

As for Ashley? "I gave up my dream apartment in the swanky East Village with my best friends, my fast-paced lifestyle and packed social calendar, and limitless opportunities for ordering Thai food from Seamless," she said. Being the best ambitious, determined and fulfilled professional she can be ultimately relies on a strong foundation of personal satisfaction and support.

More importantly, she said, the career will eventually fade and what really matters will come to the fore.

"As I imagined looking back over my life," said, "I knew that my relationships would be the most meaningful."

There's nothing anti-feminist about that.