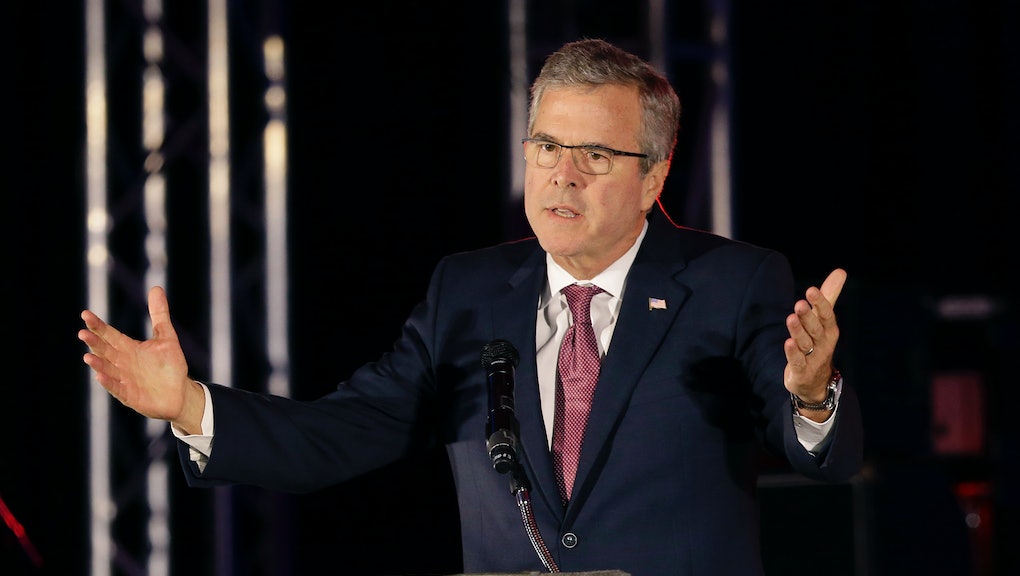 After a week of dithering over whether he would have done like his brother and invaded Iraq, likely Republican presidential candidate Jeb Bush completed a days-long about-face from his initial answer and told an audience at a town hall event in Arizona on Thursday that, "knowing what we know now," he would not have authorized the 2003 war.

The resolution, such as it is, comes near the end of a brutal week for the not-yet-official Bush campaign, and the former Florida governor is paying the political price. His Republican opponents have skewered him, conservative pundits are openly mocking him, and his terrible poll numbers, even at this early stage in the race, are starting to look more ominous.

All of which carries a certain irony: Could it be that more than a decade after the first American troops rolled into Iraq, a Bush is finally being held to account for the disastrous war that followed?

A quick rehash of Bush's very long week (it's only Thursday!) would suggest the answer is yes — at least on the campaign trail.

Family man: Bush has gone to great public lengths in an effort to distance himself from his brother, George W., on foreign policy matters. "I am my own man," he declared during a speech in Chicago in February, "and my views are shaped by my own thinking and my own experiences."

But that narrative quickly began to fray. A Washington Post report found that his advisers on issues of war and peace are drawn almost exclusively from past Bush administrations. Last week, a group of indiscreet guests at a "private" event told CNN that Bush described George W. to them as his point man on "advice" about the Middle East.

Bush's terrible week: His Hamlet routine began on over the weekend, after Fox News released a preview of an interview with host Megyn Kelly that would air on Monday. Kelly asked Bush if he would have taken the country to war "knowing what we know now."

"I would have," Bush said, "and so would have Hillary Clinton, just to remind everybody. And so would almost everybody that was confronted with the intelligence they got." Then he started on about how "mistakes" were made in the early days of the occupation, but no one could possibly be blamed for the slaughter that followed.

Bush appeared on Sean Hannity's radio program on Tuesday, after a day of withering coverage and criticism for his remarks to Kelly. This time he told Hannity that he "interpreted the question wrong."

"I was talking about given what people knew then, would you have done it, rather than knowing what we know now," Bush explained.

So yes or no on the invasion? "That's a hypothetical," he said, before again alluding to "mistakes" made in its aftermath.

It got worse: On the third time out, in Nevada on Wednesday, Bush unveiled a new logic. He would not entertain the question, he said according to ABC News, not only because it was "hypothetical," but because the simple act of discussing why and how the invasion was a bad idea — following a nearly nine-year-long war that killed 4,425 Americans and at least 500,000 civilians, according to some studies — was in some way a "disservice" to military veterans.

Then he set about blaming President Barack Obama for removing U.S. forces too soon, creating a power vacuum that led to the rise of the Islamic State — a blinkered, ahistorical argument that was famously shredded by a 19-year-old college student in the audience.

"You stated that ISIS was created because we don't have enough presence and we've been pulling out of the Middle East," Ivy Ziedrich, a political science major at the University of Nevada, Reno, told Bush in an exchange captured by ABC News. "However, the threat of ISIS was created by the Iraqi coalition authority, which ousted the entire government of Iraq. It was when 30,000 individuals who are part of the Iraqi military were forced out. They had no employment, they had no income, yet they were left with access to all the same arms and weapons."

Which brings us back to Arizona, and Thursday's grand finale.

"Here's the deal," Bush began, launching into his fourth answer in as many days. "If we're all supposed to answer hypothetical questions, knowing what we know now, what would you have done, I would have not engaged. I would not have gone into Iraq."

To recap, here is a helpful tweet from Salon's Simon Maloy:

Fooled again? At the end of his event in Nevada, Bush was asked by the traveling press to explain where he differed from his brother and father, the former presidents who both, in their respective White House tenures, launched wars against Saddam Hussein's Iraq.

"I'm much better looking than my brother," Bush said, according to the Washington Post. "I'm much younger."

He's got that. And he's got the family name. It's brought him this far.

But if Bush is going to reclaim the White House for his clan, he will have to answer for his brother's failures. He will have to explain why, given all they share, he would not be inclined to set the country down the same nightmarish path. With so much at stake now in the Middle East, and the threat of a terror attack never too far off, Bush needs to tell Americans what he's learned from his brother's catastrophic failures. A good first step would be admitting, once and for all, how real they were.