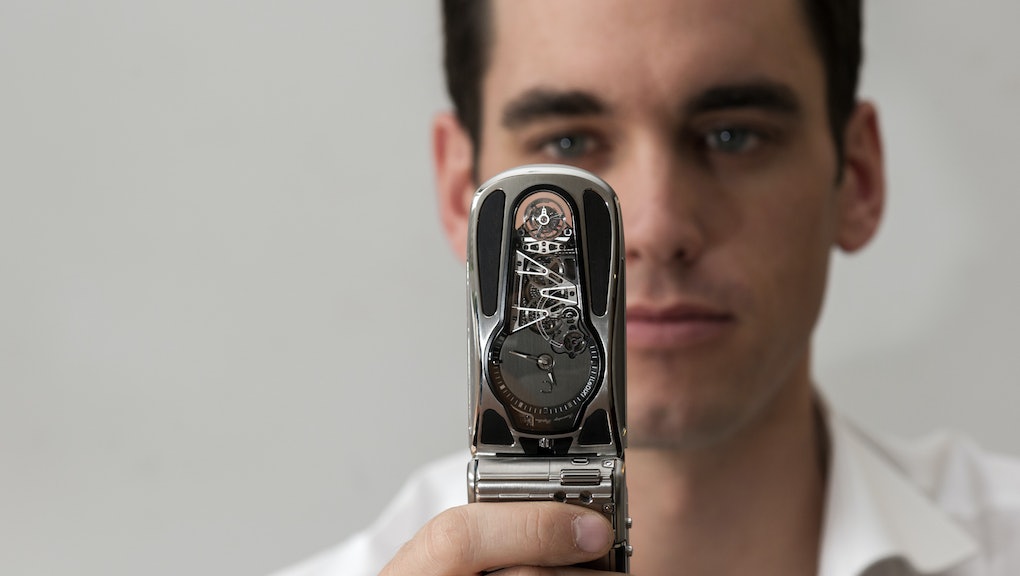 In many ways, Giada and Evan are your average Brooklyn couple. Giada, 22, is a college student on the cusp of graduation; Evan, 24, works in a museum and as an artist. They visit museums, read together and try to be outside as often as they can. They've been dating for about six months.

Spend a few hours with the two of them, however, and you'll quickly notice something that is a peculiar sight in 2015: Neither of them has a smartphone. With their feet firmly planted in the analog world, Giada and Evan have chosen to turn away from what many of us see as an absolute necessity.

"I'm trying to cultivate mindful relationships and a mindful life, and a smartphone is something that I personally have made a decision not to [own]," Giada told Mic. Her current device? A "shitty pre-paid phone" that resembles a Blackberry. "I wanted to cultivate my own relationship with technology, rather than having it take over my life," she said.

Evan echoed her desire. "I basically just never really got a smartphone. It was never appealing to me," he told Mic.  "They really promote such a mental state and type of behavior that I'm not really about." He gave in and bought one not too long ago, he admitted, but said he soon came to regret it. "I really didn't like it. I felt like I caved in this way that wasn't indicative of who I am."

It was stolen a month later, but he was far from devastated. "I didn't pick up a new one," he said.

The United States of Technology: Giada and Evan are rare breeds in a world that is becoming increasingly fetishistic and fanatical about its tech.

According to the Pew Research Center for Internet, Science and Tech, 64% of American adults own a smartphone, up from 35% in 2011. The pattern is even more apparent in young people: 15% are heavily dependent on their smartphones for access to the Internet, compared with only 7% of Americans overall. Our dependence on the gadgets is so acute that there's even a name — "nomophobia," for no-mobile-phone-phobia — for the condition that envelops us when we're separated from them, as well as a set of metrics to determine how bad one's nomophobia is.

We wait hours in line for the newest iPhone. We created enough demand to feed the creation of over 1 million mobile apps, and that was in 2011. We often go over our allotted data plans. We burst into tears when our smartphones break. We're so engrossed in them that texting while walking has become a safety hazard.

But people like Evan and Giada are eschewing that, partially because they want to avoid this dependence. "I feel like it's kind of an addiction, and if I had a smartphone, it would be like having the addictive substance within arm's reach at all times," Giada told Mic.

She grew up with barely any technology in her house — no computers, no TVs — and she worries that a smartphone would spark a hunger for technology that she has thus far avoided. "Not having one feels like giving myself agency in a weird sort of way," she said.

For Evan, forgoing a smartphone is akin to having the ability to see through a hazy curtain of expectations and pressure, like being bombarded with Instagram photos and friends' social media updates. "I feel like more and more, people will ask you to make an online avatar of yourself. Avatar in the literal sense — sort of like a totemic, digital manifestation of yourself that you have to tend to all the time." It's time-consuming, and can begin to feel like an obligation rather than a choice, he said to Mic.

While Evan and Giada both cited the financial obligation as another downside, they said it wasn't the primary problem; they were more concerned with avoiding the invisible but vise-like grip of the tiny little pocket computer.

"Not having [a smartphone] feels like giving myself agency in a weird sort of way."

Grace, 22, told Mic that she values the old-school quality of her phone, a flip phone whose battery lasts a week between charges and has withstood falling down a flight of stairs. "All I want to do is text and call, the basics of communication," she said. She had a smartphone for a time in college, but returned it after a month because, as she put it, "it made everything so much harder.

"It was more expensive," she continued, laughing, "and irritating as hell. It was too much phone. It was a bad 30 days."

There are definitely some benefits. While Grace, Giada and Evan all shrugged their shoulders at the so-called advantages that come with having a smartphone, they uniformly added that owning one was prudent in the professional realm. In fact, all three reported that if it their smartphoneless-ness began to affect their jobs, they would admit defeat and convert.

Evan, who studied illustration in college, conceded that if he were to work full-time as an illustrator, "I would probably have to have a smartphone." Giada hasn't yet entered the workforce, but once she does, she said, the ability to get work done on the go might prove too important to ignore.

Adam, 27, recently purchased a Galaxy S5 after using a cheap flip phone for most of his 20s. "I held out [on] getting a smartphone because I don't think they're particularly necessary," he told Mic. But the demands of his job — he works as an attorney in New York — outweighed that. "It makes life a lot easier to be able to answer emails on your phone," he said. "That's pretty much the sole motivation."

Take these benefits too far, however, and they can rule your life. Having access to work on the go is fantastic — except when you're out with friends on a Saturday night, or you're in bed with your significant other and your phone lights up with a Slack notification from your boss, wondering where that missing work from Friday is.

America, land of the industrious, capitalistic Protestant work ethic, has a problematic relationship with work: We do it too much. Smartphones, as exciting as they are, can exacerbate an already off-kilter work-life balance.

According to Lee Rainie, the director of the Pew Research Center for Internet, Science and Technology, access to smartphones and laptops has thrown the work-life relationship into chaos. "Home has invaded work and work has invaded home and the boundary is likely never to be restored," he told the New York Times in 2011. (The problem has likely worsened since then.) "The new gadgetry has really put this issue into much clearer focus."

Smartphones, as exciting as they are, can exacerbate an already off-kilter work-life balance.

In many ways, Giada, Evan and Grace are lucky. They don't have to worry about missing emails from superiors, because once they leave the office, they're not connected 24/7. They have other obstacles to juggle — including dealing with the same superiors who object to not being able to reach their employee — but comparatively, their lives are simpler.

There's a real digital divide. For teens and young adults, not owning a smartphone means being disconnected from a wealth of information. Fifteen percent of teens own regular phones and 12% have no access to mobile technology, according to the Conversation. Many young people simply can't afford it. And those who can, but choose not to join the mobile Web, might find themselves left out of the cultural experiences that define our generation.

"I think I would have to be working in a shack somewhere or manning a smoothie store to feel like I could deal with a flip phone again," Kate, 27, told Mic. She spent her 20s with a cheap Blackberry knockoff whose make and model she now can't remember: "It looked like a rectangle piece of shit." Now she's a smartphone convert. "I can't imagine [life] without it, and I need it with how I've set up my life right now."

For Kate, part of the problem came with the gaps in cultural understanding. When people would talk about Snapchat, she said, "I didn't have a frame of reference. I had no clue what an Angry Bird was."

Giada recalled one person who looked at her like she "was insane" when she revealed her lack of iOS know-how. "It was a total clash of worlds. I looked into her eyes and started to talk about it, and then I realized, I don't think I can possibly convey to you what I'm trying to say," she said.

For now, that divide is not a deal breaker. As Evan pointed out, he still has a laptop and a TV and personal website. He can still inhabit both worlds, analog and digital, without too much trouble. But in 20 years, the landscape may well look very different, and the number of people without smartphones will likely continue to dwindle.

He wasn't sure if he would ever be forced to buy an iPhone or one of its competitors. As he pointed out, however, it's not the smartphone itself that causes problems, it's the dependence they encourage.

"They're not bad in and of themselves," he said. "They just foster a certain type of behavior."