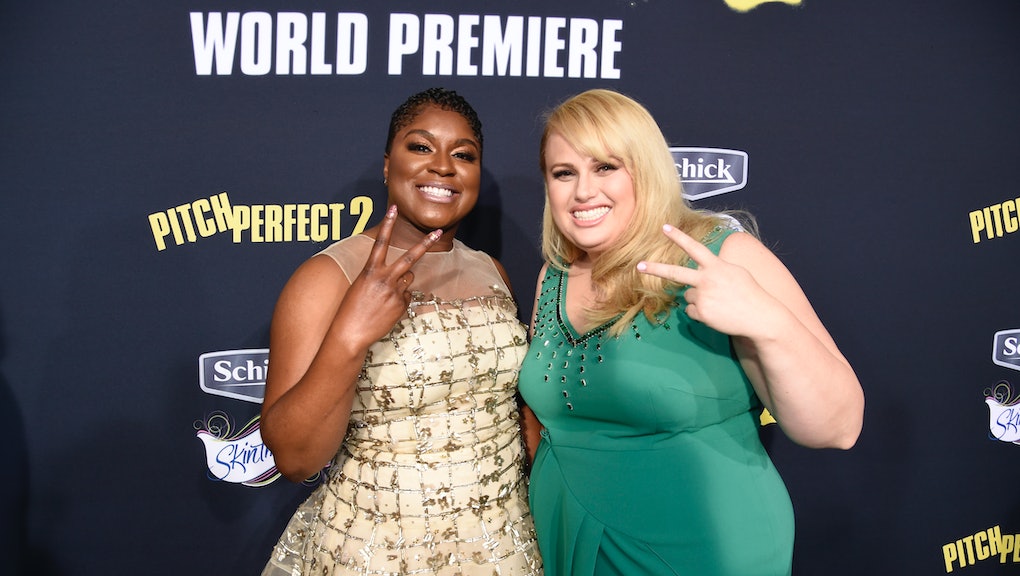 In Pitch Perfect 2, a new member of the winning Barden Bellas tries to deflect some criticism. Oh sure, blame the minority, Latina singer Flo says. Yet original Bella Cynthia-Rose (Ester Dean) isn't having it. "I'm black, gay and a woman," she says defiantly.

It's a funny line, playing off the film's tendency to talk in stereotypes. But just like with all its characters, Pitch Perfect 2 doesn't allow Cynthia-Rose to be defined as just that. Nor, of course, would her portrayer Dean, a singer-songwriter-turned-actress with a hearty laugh and a stellar sense of self to match. Her positive, anything-goes attitude is infectious; she's the kind of woman you desperately hope will become a star.

"That line is what it is: I am black, I am a woman and if I wanted to be a lesbian today or tomorrow, I could be," Dean said in an interview with Mic. "But that's not what determines a person or who they are."

As an artist who has worked for years behind the scenes to create an impressive career for herself, Dean is enjoying her time in the spotlight. She's taken to Pitch Perfect with aplomb, treating it as the ride of a lifetime.

Unlike the other Barden Bellas, Dean had no background in acting before Pitch Perfect. She came from the world of music, where she's made an impressive name for herself as a songwriter. Her co-writing credits include Katy Perry's "Firework," Beyoncé's "Countdown" and Rihanna's "S&M." In a fun gag, she gets to sing that last song in the original Pitch Perfect.

In the first Pitch Perfect, Dean's character Cynthia-Rose is a freshman who impresses at the a cappella auditions — after being mistaken for a guy. Her character's sexuality is a big point of question in the first movie, played for laughs mostly but also informing a young woman forging her own identity.

Fast-forward three years as Pitch Perfect 2 does, and Cynthia-Rose is a whole new woman, having grown much in the years spent off-screen. "She has been figuring out who she is and what's she about. She's comfortable enough to express herself," Dean told Mic. "Nobody has to wonder if she's a lesbian. She's all the way out."

She's also grown into a more confident performer. The same skills Dean exhibited in Pitch Perfect are still on display, but her combination of rap and pure singing is sharper than ever. She once again plays a major part in the final competitive performance, blending Beyoncé with Flo Rida.

In addition to promoting Pitch Perfect 2, Dean is spending time on her music. She recently wrapped a tour with Nicki Minaj and Trey Songz, whom Dean says is apparently "a big Pitch Perfect fan," and has a song called "Crazy Youngsters" on the film's soundtrack. While music will remain her primary passion, she's dying to return for more Pitch Perfect as long as they'll have her.

"I think anybody would want to come back to Pitch Perfect," she said. Dean envisions a future in education for Cynthia-Rose, comparing her to Whoopi Goldberg's nun-in-disguise character from Sister Act. With a laugh, she added, "I'll even be in Pitch Perfect 10 as somebody's grandma."