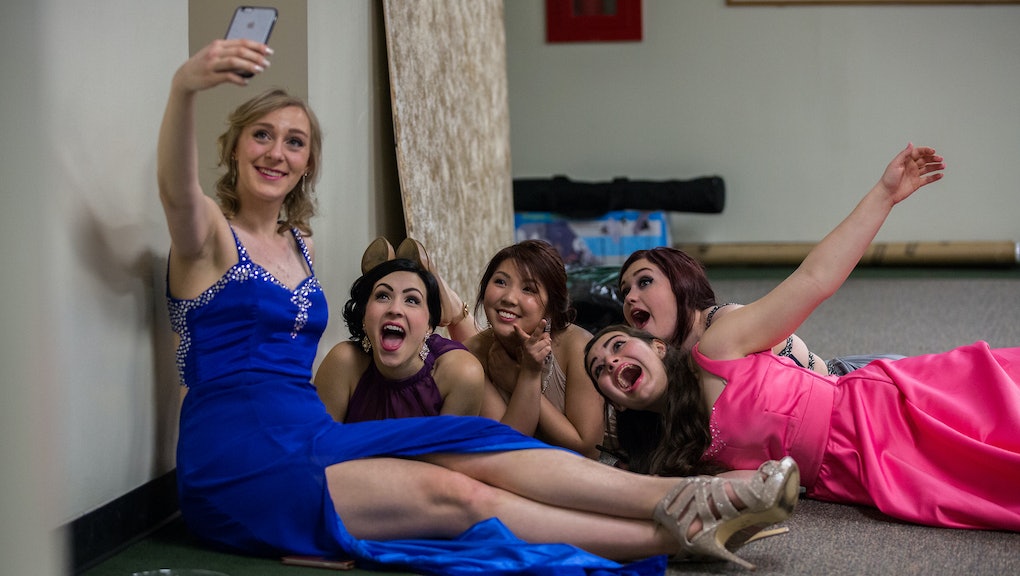 Teens Are Pushing Back Against Sexist Dress Codes

Eight days before Shelton High School's prom, students were shocked by an announcement: backless dresses and those with cutouts would be unacceptable, according to NBC Connecticut. Of course, no amendments were made to the event rules for men's attire.

As Shelton High School Superintendent Freeman Burr told NBC on Tuesday, administrators want girls "to be dressed appropriately — appropriately with class and dignity, and also dressed in a tasteful way." But who exactly is the dress code meant to benefit?

"As is the case with most dress codes, scandalized school administrations are reserving their ire for the female students — there is curiously no code about how much skin male prom-goers can show," the Guardian's Jessica Valenti wrote Thursday. "And like most puritanical nonsense directed at young women these days — the concern is not for the girls, but for the lust their dresses might inspire in others."

This seems to be the very concern at the heart of Shelton High School's decision. Burr himself stated that the decision came in light of "concerns raised by some faculty and staff, and even some of our male students ... about some of the prom dresses that were being shown."

But beyond the sexist motivation at the heart of such codes is the way they are punitively enforced. Lauren Wiggins, senior at Harrison Trimble High School in Canada reportedly received detention on May 11 for "inappropriate" attire that caused a "sexual distraction," Mashable reported. Alexus Miller-Wigfall, a high school student in Pennsylvania, was recently suspended for wearing a prom dress determined "too revealing," despite the fact that the full-length gown had long sleeves. Dictating and restricting women's appearance and self-expression but not men's is sexist enough. Implementing punishment based on resisting this treatment further encourages shame.

But students are pushing back: The students at Shelton in Connecticut launched a petition to reject their school's dress code. The petition states, "There is a sexist and backwards logic that girls must cover up so that boys are not distracted or tempted to behave inappropriately" and that rather than teaching "girls to hide their bodies" schools should "teach boys self control and that they aren't entitled to a girl's body."

They're joined in their fight by other students across the country — like the anonymous high school student who posted a mini-manifesto about dress code sexism on the walls of her school and Wiggins, who wrote a scathing letter to her school's administrators.

These efforts may not have tangible effects on this prom season, but by speaking out and pushing back, these students are undoubtedly paving the way for future conversations about dress codes. Their brave voices are displacing shame from their bodies to where it more appropriately belongs: the sexist administrators themselves.

As Valenti astutely observed in the Guardian, "The only thing shameful about a 'revealing' dress is the adult who can't stop obsessing over it."