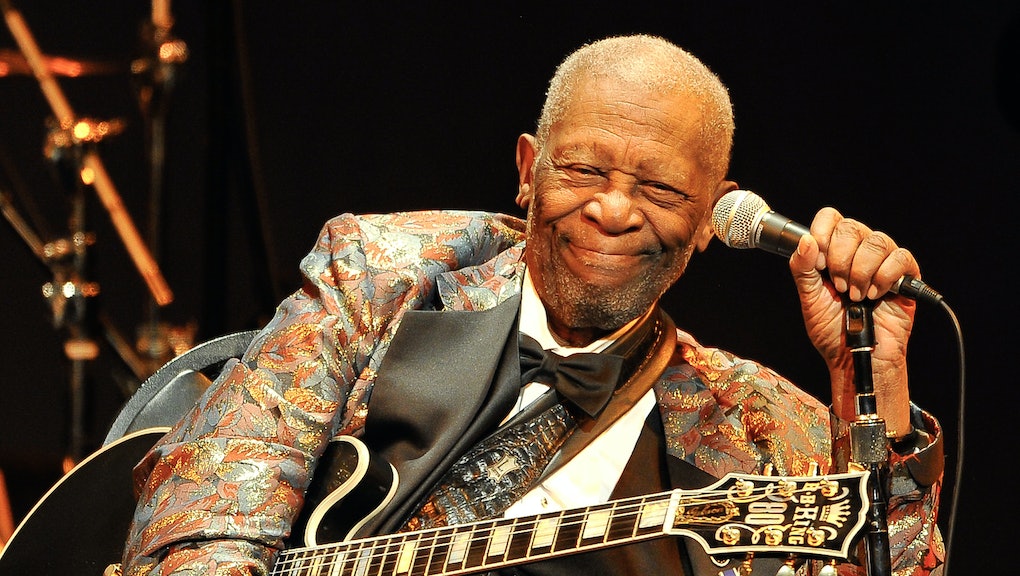 13 of B.B. King's Most Powerful Quotes to Remember Him by

B.B. King, one of the most influential musicians of all time, who mentored the greatest guitarists the world has ever seen — Eric Clapton, Jimi Hendrix and Keith Richards — and was himself the undisputed king of the blues, died late Thursday evening. He was 89.

King won 15 Grammy Awards, but his true power was in the live show. He was a tireless performer and toured well into 2014, until October when he announced the cancellation of the remaining eight shows of his tour. In 1956, he played an astounding 342 shows, and even in the final year of his tour played 70. He never lost his vital force.

But King is best remembered by those who knew him as a friend and a teacher. His theory on the blues was profound: "People all over the world have problems," he wrote in his 1988 book Off the Record: An Oral History of Popular Music. "And as long as people have problems, the blues can never die."

Thanks to King the blues live on. Here are 13 quotes to remember him by.

1. On the sadness of the blues

2. On connecting with the audience

"I look at an audience kind of like meeting my in-laws for the first time. You want to be yourself, but you still want to be somebody that they like. When I go onstage each night, I try my best to outguess my audience, and I like to feel in most cases like I'm a big guy with long rubber arms that I can reach around my audience and swing and sway with them — move them with me. And many nights, I can't. Many nights I can. But you do like a good manager with a baseball team. You keep pulling pitchers, you keep trying." — Blank on Blank

"The crowds treat me like my last name. When I go onstage people usually stand up, I never ask them to, but they do. They stand up and they don't know how much I appreciate it." — Rolling Stone

4. On never giving up

"I think I've done the best I could have done. But I keep wanting to play better, go further. There are so many sounds I still want to make, so many things I haven't yet done. When I was younger I thought maybe I'd reached that peak. But I'm 86 now, and if I make it through to next month, I'll be 87. And now I know it can never be perfect, it can never be exactly what it should be, so you got to keep going further, getting better." — From Jon Brewer's film The Life of Riley via the Guardian

5. On being true to a sound

"I'd rather be B.B. King. That's the way I started. Let the heavy metal guys play heavy metal, let the others play the other ... I try to do what I do better, not get away from it." — Guitar

6. On his guitar, Lucille

"I used to play a place in Twist, Arkansas ... It used to get quite cold in Twist. And they used to take something that looked like a big garbage pail and set it in the middle of the floor, half-fill it with kerosene. They'd light that fuel and that's what we'd use for heat ... But this particular night, two guys started to fighting and one of them knocked the other one over onto this container. When they did it spilled on the floor. Now, it was already burning so when it spilled it looked like a river of fire. Everybody ran for the front door including yours truly. But when I got on the outside then I realized that I'd left the guitar inside. I went back for it. The building was a wooden building and it was burning so fast that when I got my guitar it started to collapse around me. So I almost lost my life trying to save the guitar. But the next morning we found that these two guys who were fighting were fighting about a lady. I never did meet the lady but I learned that her name was Lucille. So I named my guitar Lucille to remind me not to do a thing like that again." — Blank on Blank

7. On growing up poor

8. On making your own talent

"It seems like I always had to work harder than other people. Those nights when everybody else is asleep, and you sit in your room trying to play scales. I just wonder where I was when the talent was being given out, like George Benson, Kenny Burrell, Eric Clapton ... oh, there's many more! I wouldn't want to be like them, you understand, but I'd like to be equal, if you will." — Telegraph

"I've known people that was a part of a family and always feel that the family liked everyone else but them. That hurts, and that's as deep a hurt as you can possibly get. I've known people that would have problems with their love life. This is kind of how blues began — out of feeling misused, mistreated. Feeling like they had nobody to turn to. Blues don't necessarily have to be sung by a person that came from Mississippi as I did, because there are people having problems all over the world." — Blank on Blank

10. On growing up in segregation

"I knew that if I went to town on a Saturday, which I did, and there was two fountains, one said "Black" and one said "White." I didn't think other than that if you want to stay out of trouble, leave the white one alone. I also noticed that when I went to the restrooms there was one that said "White Men," "White Ladies" and "Colored." That's all I knew. I grew up with it. It wasn't like somebody just threw me down there and said, "You don't bother that ..." But I was taught that in my early life. My family would always say — because there was people being lynched around me. I haven't seen people be lynched, but I've seen them after they was. And I was told by some of the elders that, you know, "Unless you do certain things this can happen to you or that can happen to you. You don't bother the white ladies, you don't do this, you don't do that," and I learned that at an early age and to me it was just part of my training. I think this is why black people never did resist for such a long, long time because if there's any such thing as being brainwashed I was brainwashed, but it didn't bother me." — Academy of Achievement

"I believe all people are good. Some just do bad things. I had a teacher — God bless him, he died a few years ago —Luther H. Henson. I was a student of his at the time I lost my mother. He was my one person that seemed like anything I wanted to know, I could ask him and he'd give me an answer that was right. He told me, 'There'll come a time when people won't judge you by your color; they'll judge you by your deeds; how you act and how you treat people.' Hearing professor Henson say that made me think, and I guess sort of toe the line a little bit more. And later on I heard Dr. King say, 'I have a dream, where you'll be judged not by the colour of the skin ...' Of course, I'd been a man for years when Dr. King came along, but it hit me hard because it strengthened for me what prof Henson had already said when I was a boy." — Telegraph

13. On the perfect sound

"I'm still searching even today for a sound, like the guy that's searching for a home. I haven't been able to find that completely. I'm satisfied at times with the sound of my guitar ... but it is a little sound that I hear but I can't tell anybody about it. I don't know how. But if I ever get it, I'll know." — BBC