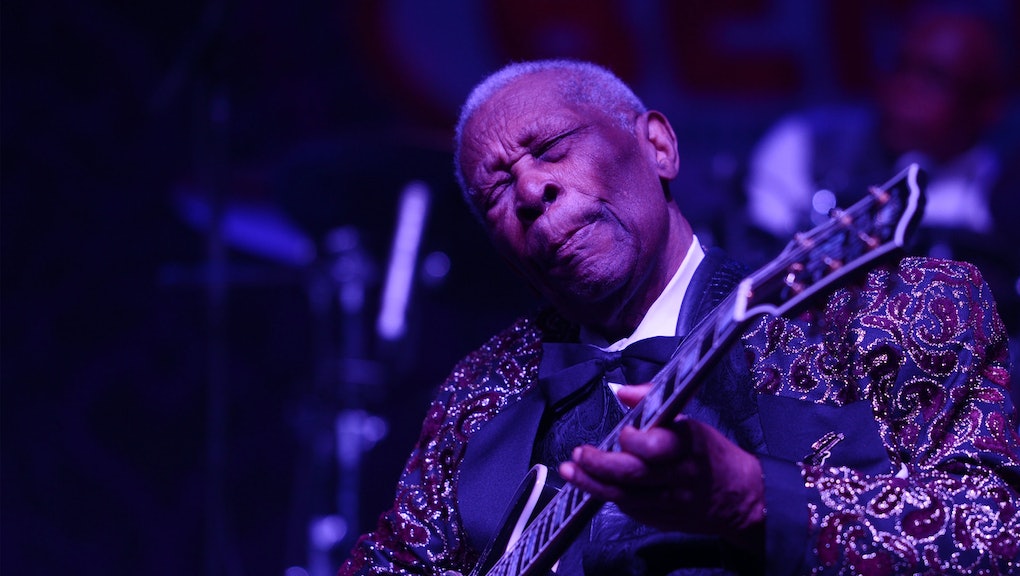 Without B.B. King, Music Wouldn't Be the Same

Blues legend B.B. King died in his sleep Thursday at age 89. He was a monumental force in music, as well as one of the greatest guitarists the world has ever seen. King never much liked chords, but he could say more with a single vibrato note than most guitarists could with a hundred. That was his goal. "I wanted to connect my guitar to human emotions," King said in his autobiography, Blues All Around Me, as reported by the New York Times.

For most of his 89 years on earth, that's exactly what he did.

From the plantation to the stage. King lifted himself to blues superstardom out of the harshest conditions imaginable. He was born to a Mississippi sharecropping family in 1925. By the time he was 14, his father had left and his mother was dead, and King supported himself by sharecropping an acre of cotton. He lived on a borrowed allowance of $2.50 a month, teaching himself to sing and play guitar in what little spare time he had. "My cousin and I would go out singing, wouldn't get in until late," King told Academy of Achievement. "We'd sleep and they'd have a hard time waking us up in the morning to go pick cotton."

In 1947, King left the plantation and hitchhiked to Memphis with less than $3 in his pocket. He knew the blues would be his livelihood, he told the Academy of Achievement , "[w]hen the people started putting the money in the hat."

"I just hoped I could be good enough to keep them doing it," he said. "So far they still do it."

He got his first big break on the radio performing as "Beale Street Blues" Boy, which later became "Blues Boy" King and then B.B. After two years after gigging around Memphis, King recorded his first hit, "Three O'Clock Blues." It reached No. 1 on Billboard's rhythm and blues charts, which gave King the opportunity hit the road and share his blues with the country.

Finding Lucille. In the ensuing years, King toured through all the major clubs, working nearly every night. In 1956, his band played an incredible 342 one-night stands, always with his affectionately named Gibson guitar, Lucille.

"Lucille got her name in a nothing town by the name of Twist, Arkansas," King told music writer Michael Lydon, according to Washington Post. "We were playing some club, and some guys were fightin' and they knocked over a kerosene barrel and burned the place down. I almost got killed going back in to save my guitar, and when I found out the fight was over a gal named Lucille, I named my guitar that to tell me to keep her close and treat her right."

King lived large, gambling and sleeping around. He claims he fathered 15 children by 15 different women. In true blues fashion, a heartbreak following the divorce from his second wife, Sue Hall, inspired him to record his most well-known song, "The Thrill Is Gone." Not all of his songs were tragic blues numbers, though.

Incalculable influence. King truly revolutionized the blues in his lifetime. "He is without a doubt the most important artist the blues has ever produced," Eric Clapton wrote in his 2008 biography, according to Rolling Stone. "And the most humble and genuine man you would ever wish to meet. In terms of scale or stature, I believe that if Robert Johnson was reincarnated, he is probably B.B. King." Clapton mourned his friend Friday morning with a touching Facebook video.

"The tone he got out of that guitar, the way he shook his left wrist, the way he squeezed the strings... man, he came out with that, and it was all new to whole guitar playin' world," fellow blues guitarist Buddy Guy wrote on Instagram this morning. "He could play so smooth, he didn't have to put on a show. The way BB did it is the way we all do it now. He was my best friend and father to us all."

King's passing leaves a large absence in music. He was a King in life and he will remain a king in death, immortalized in his tireless search for that perfect tone. "I'm still searching even today for a sound, like the guy that's searching for a home," he said in a 1972 documentary, Sounding Out. "I haven't been able to find that completely. I'm satisfied at times with the sound of my guitar ... but it is a little sound that I hear but I can't tell anybody about it. I don't know how. But if I ever get it, I'll know."