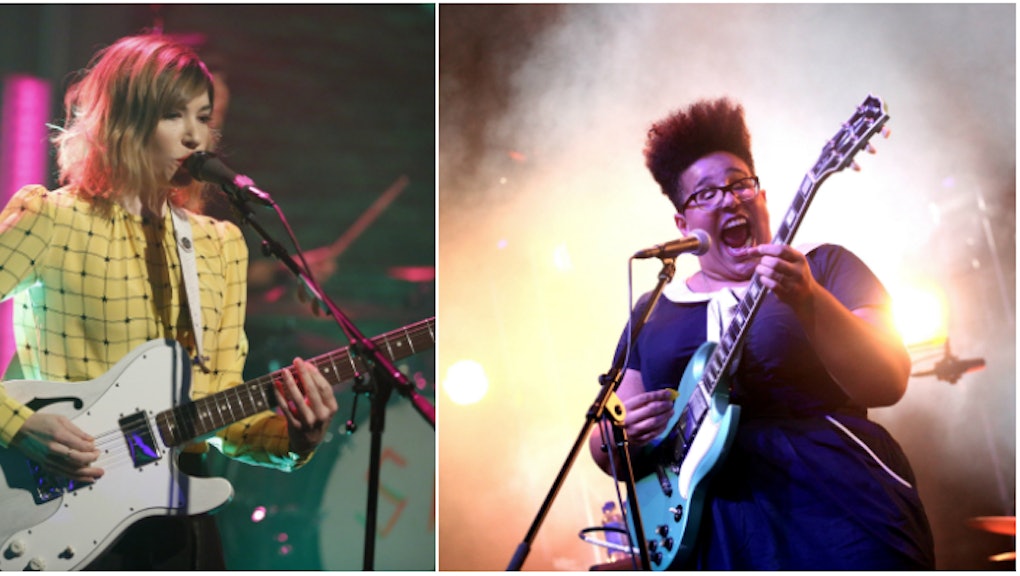 2015 Is the Year of the Female Rocker

Rock music has long been a boys' club.  From the underrepresentation of women in the Rock and Roll Hall of Fame to the general lack of female-fronted Billboard chart-topping rock bands to Rolling Stone's inclusion of a whopping two women in their 2011 list of the 100 greatest guitarists of all time, women have historically taken a backseat to men when it comes to rock music. But if women are so heavily underrepresented in the genre, it must be because they just aren't producing quality rock music, right?

Wrong. 2015 has been a banner year for women in rock music, including the return of legendary acts, the emergence of important new artists and the addition of important new pieces to rock's literary canon. It's never been a better time to be a woman in rock. As Joan Jett told Billboard before she was inducted into the rock 'n' roll hall of fame, "There should be more women in the Hall of Fame, and more women in rock. They're out there, they just don't get the notice the pop girls do."

An auspicious start: 2015 began almost immediately with one of the biggest rock reunions of the decade, the return of Portland's Sleater-Kinney. One of the most important rock acts to come out of the punk and riot grrrl movements of the '90s, Sleater-Kinney proved they are just as relevant in 2015 with the release of No Cities to Love, their first album together in nearly a decade. Through rave reviews and an ongoing tour, the band was like a challenge for every other female act of the year, setting a high bar to reach. One after the other, female rockers have risen to it.

Female rock bands: On the heels of Sleater-Kinney's return to prominence, a handful of newer artists have released albums that are just as important. In the soul and roots world, Alabama Shakes — fronted by Brittany Howard, one of the best vocalists in rock music or any other genre — shook things up with Sound & Color, a radical departure from their debut album. In drawing together influences as divergent as Prince and Led Zeppelin, the record is one of the most creative rock releases of the year, and its full force comes from Howard's unshakeable delivery.

Meanwhile, the indie scene has been full of breakout female-led acts. Indie folk act Hop Along's most recent album, Painted Shut, inspired Vulture to ask if lead singer Frances Quinlan had "the best voice in rock music today." Bethany Cosentino's project, Best Coast, came out with the heavy California Nights, arguably their strongest LP to date. It's a musical embodiment of the increasingly prominent "female slacker" culture made popular by shows like Broad City and Inside Amy Schumer.

Female singer-songwriters: Often, women are disenfranchised in pop music by the assumption that all their songs are written by men. Female rock auteurs are completely bucking that assumption. Brooklyn-by-way-of-Nashville artist Torres released her sophomore effort, Sprinter, in May. It's a powerfully confessional (for lack of a better word), emotive LP that recalls both Patti Smith and P.J. Harvey, featuring contributions from the latter's collaborator, Rob Ellis. Rounding out 2015's strong first half for rock is a huge album from a new artist, Courtney Barnett. The Melbourne singer-songwriter is widely being hailed as one of today's most important songwriters thanks to the strength of her full-length debut, Sometimes I Sit and Think, and Sometimes I Just Sit, an album that tackles issues like animal rights and capitalism via Barnett's deadpan delivery and knack for a clever turn of phrase.

Spreading the female narrative: Rock is more than just music, though. It's an industry and a set of stories. Most years, rock criticism, as well as rock biography, is dominated by male voices. But it's been a big year for women in the typically male-dominated field of rock writing, for both memoir and criticism. Sonic Youth's Kim Gordon made the New York Times Bestseller list with her memoir, Girl in a Band. Meanwhile, gaining representation for those who write behind the scenes, Jessica Hopper, editor-in-chief of the Pitchfork Review and former Rookie music editor, just released The First Collection of Criticism By a Living Female Rock Critic, a both humorously and unfortunately titled anthology of her work over the last two decades.

"[I would] look at the Amazon music books, like 100 best sellers, and I would count how many women had books in that top 100," she told New York Magazine's the Cut. "During the course of doing the book it topped out at five. Usually it was two. I would seethe, and I would go back to the book. I love music criticism, I love women, I love working with young female writers. I need more books that speak to my experience of hearing music, seeing music, playing music that records the history I am a part of. We need more than one riot-grrrl book, we need 12."

So while Mumford & Sons may be racking up sales for their not-so-critically-acclaimed attempt at a rock record, it's these women who are keeping rock alive and well. They may not be commercial hits just yet, but this is only the beginning.