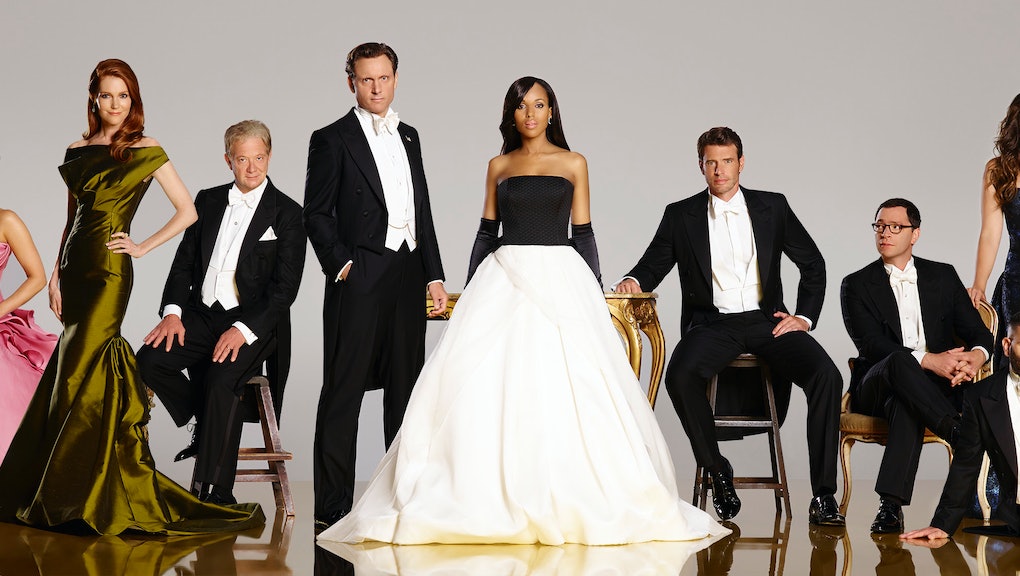 Amid buzzy new hits like How to Get Away with Murder and Empire, ABC's onetime crown jewel was faced with a difficult task in season four: Stay relevant even when you're not the hot new thing on the block anymore. Thanks to the show's usual brand of ludicrous plot twists and breakneck pace, it stayed as fresh as ever.

That amount of twisting can be dangerous for a show, though. Scandal became lost in itself at several points this season, only occasionally showing the brilliance it once routinely exhibited in season two. The series may not be able to sustain such routine plot turns for that much longer. As long as it's still around, however, it'll keep shocking us more than we could ever expect.

In honor of the show that never fails to surprise, and Thursday's season finale, we've rounded up the seven plot twists that gave us whiplash this season. Spoilers ahead, of course.

The president's daughter gets caught on tape.

Season four of Scandal packed its wildest moments into the second half, preferring a quieter resetting of pieces after the high-octane season three. Yet when Olivia Pope sees a sex tape featuring first daughter Karen Grant, she's repulsed.

"I just saw the dirtiest sex tape I have ever seen in my entire life," she screams at Chief of Staff Cyrus Beene. It's a dark turn for the formerly quiet Karen, but it made for one hell of an episode. It also features Olivia tearing the parents of the sex-tape maker apart in one of Kerry Washington's finest scenes.

Olivia gets kidnapped and auctioned off to the highest bidder — then gets saved by an old friend.

The most jaw-dropping arc this season came in the middle of the season. After being kidnapped at the end of Scandal's midseason finale, Olivia is taken to an undisclosed location. Despite her best efforts to escape in "Run," she's auctioned off to the highest bidder. Luckily, she has a friend ready to help: Stephen Finch, Olivia's retired Gladiator who comes back to save her.

The storyline made viewers uncomfortable, as Shonda Rhimes didn't step away from challenging scenes and questions. Still, we're mostly glad Olivia wound up all right, though she did suffer from some major PTSD the rest of the season.

Happens in: episode 14, "The Lawn Chair"

This episode is incredibly similar to The West Wing's well-intentioned but messily executed parable "Isaac and Ishmael." It tries to tell a story similar to the Brown shooting in an impactful, powerful way, but resolves things too neatly. That said, if you can stomach some wish fulfillment, watching the police officer behind the shooting give a dramatic, frothing-at-the-mouth confession is wild TV. It's just depressing to realize such justice would never come to pass in our world.

When it was announced Dunham would be joining Scandal for a guest spot, would anyone have expected her to wear such an atrocious wig? More than that, could anyone have seen her murder coming? She played a memoirist recalling her sexual encounters with D.C. elites, and she had secrets Olivia couldn't let get out.

She gives a passionate defense when Olivia tries to slut-shame her — "I own my body and use it however I want with whomever I want, as many times in as many kinky ways I want," she says — and winds up murdered by Huck for her trouble. Sitcom stars: Stay away from Scandal at your own risk!

Jake almost gets killed but survives.

Would Scandal kill its secondary love interest? It sure looked that way at the end of episode 19, where Jake gets stabbed and bleeds out on Olivia's office floor. Luckily for actor Scott Foley, Jake lives to fight another day, even if Olivia isn't ever going to be able to love him the way he wants.

Can you take down a god? That's the question season four of Scandal sought to answer. Olivia's father Rowan, largely thanks to Joe Morton's legendary performance, had become a larger threat than he should have been. A monolith isn't particularly interesting to watch, but the mythology around Rowan made it impossible to take him down in a realistic way.

Then, in Thursday's finale, Olivia found a way: Don't go after the legend, but after the man underneath. His arrest for embezzlement likely isn't permanent, but it's a win for now.

Olivia and her associates come together to bury a friend.

Funny enough, since Scandal has become such a high-octane catastrophe-in-progress at all times, the truly shocking moments are the ones that stun with their silence. The beginning of season four was marked by quiet meditation on what had come before. One of the big issues facing Olivia and her former associates is the burial of their friend Harrison.

While the others initially want nothing to do with it — furious with Olivia for abandoning them at the end of season three — they eventually come together for a quiet moment. Seeing the four of them together serves as a striking reminder that these people are family, and most shocking of all, that we care about them. If Scandal can get back to that sense of love, there may be hope yet for season five.