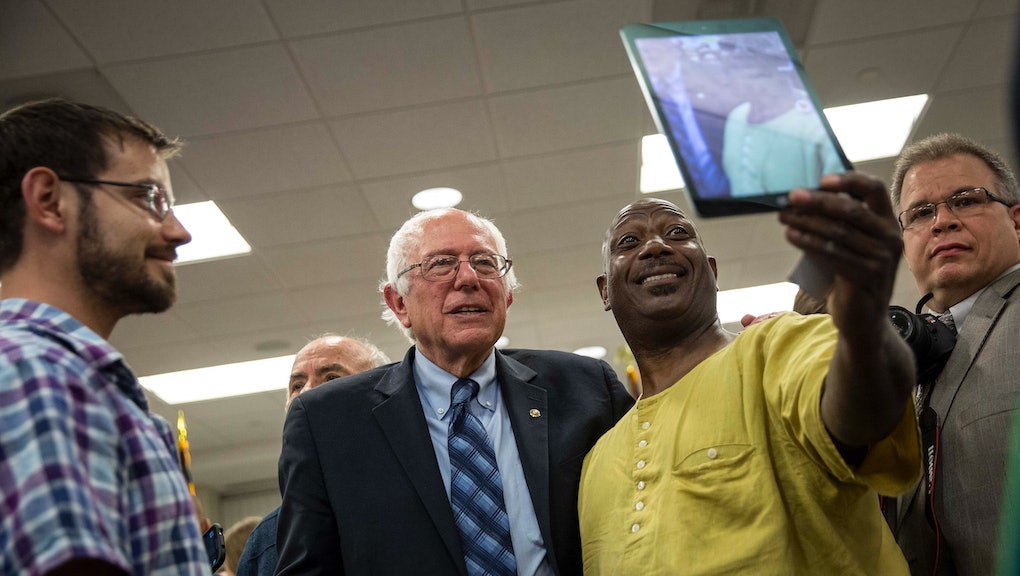 Is there an echo in here?

According to the Washington Post, Democratic 2016 presidential candidate Hillary Clinton told a group of donors on Thursday she would only nominate potential Supreme Court justices who promised to overturn its decision in Citizens United v. FEC, the 2010 ruling that paved the way for billions of dollars in outside and mostly unregulated spending on political campaigns.

If any of this sounds familiar, that's because it is. On Sunday, Sen. Bernie Sanders, the Vermont independent and Clinton's top primary challenger, made a similar declaration on CBS's Face the Nation.

"If elected president, I will have a litmus test in terms of my nominee to be a Supreme Court justice," Sanders told host Bob Schieffer. "And that nominee will say that we are all going to overturn this disastrous Supreme Court decision on Citizens United, because that decision is undermining American democracy. I do not believe that billionaires should be able to buy politicians."

This isn't the first time Clinton has embraced long-held liberal positions since she announced her candidacy on April 12. But her campaign's quick turnaround time — just four days — underlines the significant effect Sanders is having on Clinton's policy platform. Whether he pulls off the historic primary upset or not, Sanders' voice will be heard through the general election campaign and into Election Day 2016.

Taking her cues: Though a tactical necessity in the Democratic contest, Clinton's race to the left on a number of hot-button issues could complicate her likely general election campaign. For now, at least, she doesn't seem worried.

Her early focus on economic equality appears to have been pulled from the playbook of Sen. Elizabeth Warren, who has emerged as the most powerful liberal voice on Capitol Hill. Promising to be a "champion" for "everyday Americans" and, at her first formal campaign event, calling out corporate executives and hedge fund managers as the drivers of the growing wage gap, Clinton has doubled and tripled down on popular progressive causes.

"I think it's fair to say that if you look across the country, the deck is stacked in favor of those already at the top," Clinton said at an April 14 roundtable in Monticello, Iowa. "There's something wrong when CEOs make 300 times more than the American worker."

On May 7, just hours after a federal court ruled that a controversial NSA surveillance program was not authorized under the post-Sept. 11 Patriot Act (which Clinton voted for twice during her time in the Senate, first in 2001 and again in 2006, and which Sanders opposed twice, during his time in the House of Representatives), the candidate offered her support for a new bill that would place tighter restrictions on domestic snooping. Her tweet dropped a few hours after Sanders expressed a similar, if less ambiguous, response to the court's bombshell ruling.

Is this winning? Clinton's promise to employ the Citizens United "litmus test" promised by Sanders earlier in the week is undermined by her own decision to accept the aid of a super PAC made possible by the same ruling she now promises to see overturned. In fact, one week before she told donors in Brooklyn, New York, about her new thinking on Supreme Court nominees, Clinton was, according to multiple reports, huddling with potential big money contributors to her chosen Priorities USA Action group.

Despite the apparent cognitive dissonance — others might explain it in less kind terms — there is no indication, even after Thursday's comments, that Clinton has any plans to step back from the super PAC game. But her quick response to the pressure applied by Sanders suggests that the "democratic socialist" from Vermont is going to be a force throughout the Democratic primary season.