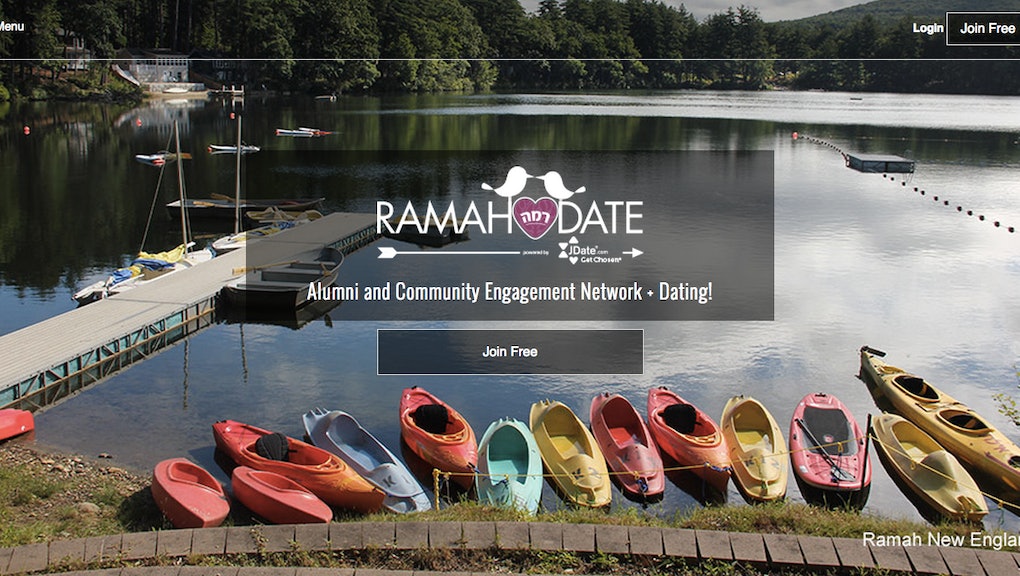 Laugh all you want at the recent rise of "adult summer camps," with their booze-soaked mess halls and raucous grown-up dodgeball games. If the trend indicates anything, it's this: There's something special about camp that you never want to give up.

That lifelong devotion and (let's just say it) obsession with summer camp is behind the latest online dating venture. On Friday, prominent Jewish online dating site JDate announced the launch of RamahDate, a partnership with Camp Ramah to create the first camp-specific online dating network of its kind. The tagline? "Find your future bunkmate."

RamahDate will function as subnetwork within JDate, requiring camp alumni to create JDate accounts, then register for a special Ramah "badge" on their profiles. Users can then filter their matches by Ramah alumni only, or peruse JDate's over 750,000 user profiles.

But let's be real: If you're signing onto a camp-only dating network, you want to hook up — or date, if you're feeling formal — with your fellow camp lovers.

If there's anything that fosters romantic connection, it's camp. As kids, it's time stolen behind bunks, adrenaline-fueled Capture the Flag games and "instructional" swim classes that turn into something else entirely. Once you're counselors, the flirtations grow up into Wet Hot American Summer-esque flings, conveniently guaranteed to have a clean beginning and end due to the confined space and time of a single summer.

Except, of course, when those flings turn into lifelong loves. For Camp Ramah, an online dating network seems like an inevitable step in a decades-long tradition: Ramah, with its seven overnight camps across North America, boasts over 400 marriages on its alumni network website, and estimates that there have been over 700 total in its 68-year history, a Ramah rep told Mic.

Countless other summer camps also have been hooking up both kids and counselors for dating and marriage for years. As CNN reported on back in 2014, it's not uncommon to see couples in the New York Times Vows section or wedding magazines who trace their relationships back to camp.

Given the beautiful scenery, confined space, physical intensity and raging hormones that make American summer camps what they are, it's no surprise that it sets the stage for romance, even decades later — and online.

As Tammy*, a twenty-something Ramah alumna, told Mic about RamahDate, "I think it's amazing.

"If my current boyfriend didn't already go to camp, I would totally use this site."